It's here :)  Geof and I are heading down south for one more destination run before the snow really starts to fly (which is in the forecast this weekend!!).

F'real.  Sixteen to thirty inches in the Cottonwood Canyons this weekend.  Booya.

We are meeting up with Stacy of Wilderness Running Company and Justin for a day of running around Zion National Park.  Only one of the most beautiful parks in the world, according to a lot of someones.  Originally, we planned to do a Zion traverse (the whole park, end-to-end), but seeing as we aren't really hip to a 48 mile run at the moment, we decided to scale it back to a more leisurely 20-30 miles instead.  We could certainly bang out a full traverse, but then it would hurt and then we'd be tired.  And there is much beer and pizza to be had post-run!  And I'm working a 12-hour shift at the clinic on Friday which puts us in Zion close to midnight.  So, we amended the plan a bit.

I'm super pumped, and reallllly looking forward to a mini-vacation of running in a really amazingly beautiful place (from what I've seen in pictures, and what little we saw in the Kolob Canyons earlier this summer); it will be our first time really in Zion, so that's pretty awesome.

Oh, what have we been up to lately?  Oh, just some mountain running...

Bethany L. showed me around the gorgeous trails of Jeremy Ranch (near Park City) a couple weekends ago.  We rocked out one heck of an 18 mile run all over those hills, through deep powdery snow, slush, streams, tacky mud, dry desert-y washes, and up endless inclines (yes, all in the same run).  I also fell.  Hard.  It even tore a hole out of the knee of my only pair of thin running tights.  Stupid tights.  I didn't like them that much anyway...which is why I just finished up mending said hole so that I can wear them with some dignity down in Zion :)  Bethany is making a go of a FFKT (female fastest known time) Zion traverse this weekend (which she is totally going to nail, just like her FFKT of the Grand Canyon R2R2R), so she schooled me all over Jeremy Ranch.  I was worked by the end of the run!  And totally stoked. 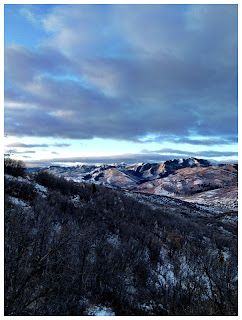 Geof and I have been heading to the Cottonwood Canyons each weekend to get in "one last run before the snow flies".  I think last weekend was really the last one.  The trails over 9,000 ft. were already covered in snow, and once we broke 10,000 ft. it was deeper stuff and left us with some wet feet!  We decided to check out the White Pine Trail just below Snowbird.  After running up to the lake and back, Geof convinced me to run the Red Pine Lakes trail too, for a little extra mileage.  It was a fantastic trail!!  There was a section of fairly sketchy ice on a steep climb, but other than that it was just perfection.  Absolute perfection.  We closed out that run with just under 15 miles.  My legs forgot they ran even before we stopped.  I felt goooood. 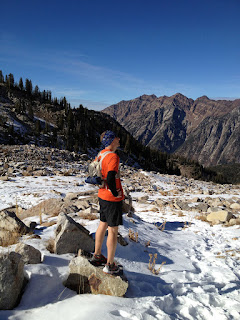 Geof contemplating the magnitude of awesome that we are surrounded by here at home.  I love this place.  White Pine Trail. 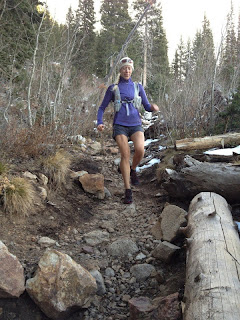 I'm sweating bullets from the stress of having just run/fudged my way down through the ice-y steep section right before Geof took this shot.  My heartbeat was in my ears.  Then it was nice 'smooth' trail again, as in this picture :)  Red Pine Lakes Trail.

So that's the latest.  Oh, and I bought downhill ski boots.  I'm turning into a f'real Utahan.  Now I just need to find skis to put said boots on :)