I survived the unthinkable, all out war, pure massacre on my immune system...the combination head and chest cold.

Okay, so it's really not that big a deal, but for someone who just plain does not get sick, it's a pretty big deal :)

This was the first time I've had to call in sick to work in over two years.  I probably could have taken one more day today, but when I woke up and felt better than I did yesterday I was too excited!  Work, oh glorious work!  World, people, sun!!

I am really terrible at being sick.  Really.  I must have slept about 14 hours worth of naps yesterday.  And in between hour and a half nap stints I would walk around our empty apartment, stare out the window, flip through an Ultrarunning magazine for about two minutes, stare at the wall for another couple minutes, boil water for a cup of tea, then crawl back into bed for another nap.  I don't know how people do it.  I work with people who call in "sick" every week.  They must get reallllly bored ;)

In any event, I haven't run a step since Monday afternoon, and I am really looking forward to running, and wrapping up Mission: 2000.  Just 18 measly miles left on the radar before I can call myself a 2000 mile runner.  I will love every step; I always do.

I did ponder 2012 goals a bit, while cooking up some quinoa for dinner last night, and today I checked into Gretchen's blog and found 31 Days of Adventure.  I dig it.  That's a good way to start the new year.  Thirty-one days of adventure.  Sounds right up my alley.  I'd also like to set a higher mileage goal for the year.  Those are always fun to do.  And some time goals for a couple of races.  But, I'll save that for a forthcoming post.  2012 is going to be another really amazing year with loads of adventure awaiting us, including a really, really big adventure.  But I can't write about that until it's really set in stone :)  How 'bout that for a teaser?!

For now, I'm looking forward to putting pavement to feet later this evening with my number one :)

This is generally the time of year I enjoy E-reflecting upon the previous 330+ days and spin off into a vaguely (read: entirely) self-centered, excited ramble about all the glorious things we've seen and done over the course of the year.
(I just physically winked as I typed that, FYI.)  (I also had my tongue firmly in my cheek.)  (Here's a grain of salt; would you like more?)

However, I am still hard at work on one final goal for the year, and will thus hold off on the aforementioned excited rambling.  But, have no fear, it is forthcoming, in some form or another.  What's a calendar running year without a blog post summing up all things awesome?  Exactly.

Mission: 2000 is getting close to wrapping up, ooooo-weeeeee!  Today I pole-vaulted over 1,960 miles.  Boom.  We've been keeping things short and sweet and aiming for simple maintenance and quick recovery.  Though, we have been pushing the pace pretty hard most days as a result of the short distance runs :)

Sunday, we headed back to the Little Red School House loop in Palos Forest Preserve and staged a smackdown with the 8.3 mile loop, finishing more than 2 minutes faster than we ran it the week before.  And this week we had the "pleasure" of slip-slidding along the trail in what was easily the muddiest I have ever seen it.  Of course, we felt pretty guilty running such a muddy trail (you're supposed to stay off the single track when it's wet).  We're rebels without a cause.  Please forgive us, trail gods!  The trail repaid us by smothering us from mid-thigh down in thick muck, and the prickly plants alongside the trail reached out and scrapped my pale sun-starved legs.  I have a few scabbed lashings to prove it.

It was totally worth it.

Despite the terrain, we still showed it who's boss and we finished up in fine time.  I was sucking air so hard I thought my lungs would explode.  I knew we were close on time, and Geof had been pulling me along as it were, but I unearthed a hidden reserve of power lingering in the shadows as we found ourselves in the final mile.  Geof was smooth and appeared to exert almost no effort as I cranked it up alongside him, turning the legs over as fast as I could muster at that time, letting the finish reel us in.  In just over 8 miles I managed to leave it all out on the trail.

By the way, I wish you a very supremely merry Holiday!  Whichever and whatever it may be, I hope you find a heaping serving of joy, love, happiness, and many, many miles :)

Stepping out of the warmth of the truck,
the cold nips at my cheeks and nose.
I yank at a zipper that won't come unstuck,
as a high-speed chill runs straight to my toes.

Breath comes out in big white puffs,
as we step onto the trail to begin our run.
Thankful to have remembered my gloves,
as frozen hands are just no fun.

Ah, the feel of a half frozen trail,
beneath our road weary feet.
It's sort of like the runners' holy grail,
when a wintery trail you do meet.

A thin blanket of winter layers the ground,
and the forest flora has taken its leave.
With hardly a glance and barely a sound,
we move through the forest with a bob and a weave.

The trail twists and takes a turn,
rolls up high and descends down low.
Oh for this how long I do yearn,
for winter's first run covered in snow!

The cold air burns my lungs and stings my face,
and my smile is frozen in time.
But I couldn't care less as I aim to embrace,
this loveliest of runs along a moraine spine!

We pick up the pace and push the hill,
winding down the singletrack.
With joy and excitment my heart does fill,
I savor these moments and don't look back.

A nice easy trail run
has officially become fast.
But hey, a little fartlek can be fun,
especially when you're already having a blast.

Before we know it we reach the end,
"Wow, that was fast! What time did you get?"
Oh how I've missed the trail, my dear friend.
"Lets get burrittos before this stomach does fret!"

There's little I love more than trail weary legs and Saturday's trail run was just what the body ordered.  First trail run since JJ100 over a month ago.  The Little Red School House loop did not disappoint :)

I was contacted by a cute little website called PocketChange earlier this week about being included in their weekly "Best of the Web" feature.  I'd never heard of these folks before, so I decided to do some research and find out what their dealio is.  Pretty interesting, a complete mish-mash of pretty much everything.  I like the vibe, so I obliged.  I dig it, so I wanted to share it with you :)

You can find the feature (and other neat-o blogs featured this week as well) right HERE.

Hey, it's almost Friday, and, this week, that means Holiday Party!

Today's run officially pushed me over 1,900 miles.  Only 100 more miles to victory!  The official "start date" for Zane Grey training is also fast approaching, so hitting this milestone will be a nice way to kick off the new training season.

Goodness gracious, I sure do love running!

And now for a photo completely unrelated to Mission: 2000...one from the JJ100 course: 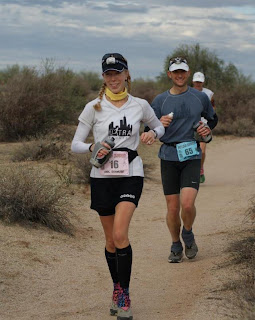 Photo credit: Manoj Nagalla
I can't believe it's only been 3-1/2 weeks since JJ100.  Seems like a lifetime ago!