It's been a few weeks that we've been in beautiful Colorado now and there's been so many rockin' adventures and so few wifi hotspots that I've fallen behind here in Bloggerland.

July is Colorado month for Geof and I.  I think we'll only miss a few days, but we have otherwise been here ever since June 27th (or somewhere around that time...I'm losing track!).  We headed to CO to spend some time with our great friends Brian and Kelly, and since we got here a touch early we got to catch up with Julia and Russ in Denver (thank you for the fantastic hospitality!!) and bag our first 14ers.  We decided Grays (14,270 ft.) and Torreys (14,267 ft.) Peaks would be wonderful starts to our mountain season.  To the trails we headed! 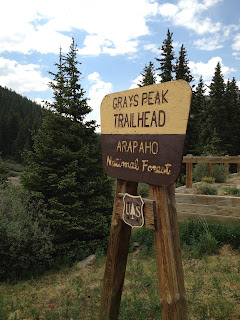 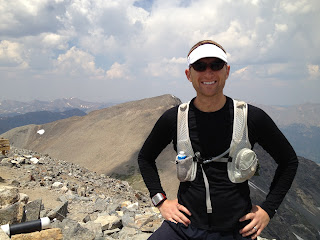 Geof on top of Grays Peak

After high-fiving Grays Peak, we ran down to the saddle and then scrambled up to Torreys Peak.  This climb was the first time I'd ever been over 14,000 feet and it felt pretty good.  Things got kind of sludgy feeling once over 14,000, but nothing a little Gu couldn't fix.  It was enormously rewarding to stand on top of these peaks. 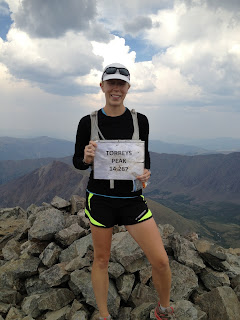 The way down was super fun as it meant we could finally let loose and RUN!  I stopped a few times to take pictures of columbines...I freaking love those flowers! 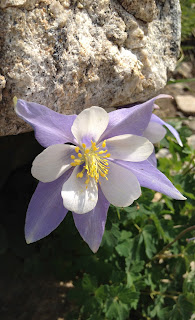 The next day we drove down to Pine, CO to see Kelly finish up at the North Fork 50k.  Her first ultra since giving birth to their son, Caleb!  Geof and I got to the start/finish area a little ahead of her finish so we stripped down to our running clothes and hit the trails to check out some of the course.  That is some beautiful country down there!  The North Fork 50 is definitely on our list; they did a great job!  Kelly had a great race and we all sat around and rehydrated on Colorado beers and burgers before heading to Breckenridge for a few days. 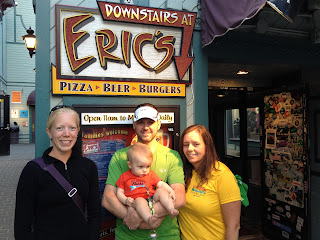 Brian was looking to join us in getting some more vertical so the next day we headed to Mohawk Lakes.  Kelly had Caleb in the carrier and they hiked while Brian, Geof and I sucked air.  It's a gorgeous, gorgeous hike and I highly recommend this one.  We, of course, ran it :)  Climbing up past old mines, an old mining hut, a waterfall and four high alpine lakes we hit near 13,000 feet (we went further than the hike description suggested) and rolling thunder before we turned it around to head back.  The run down was awesomely fun and coming back down through the pine forest was glorious!  My heart was singing! 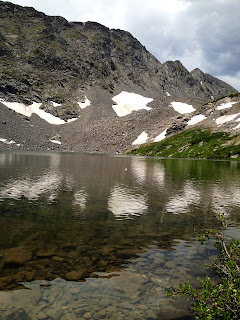 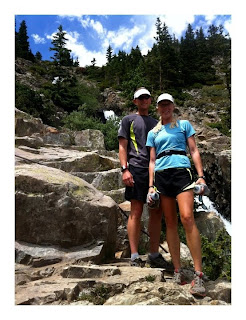 Alongside the waterfall on the way to the Lakes
Photo credit: Brian Gaines

The next day (what? a rest day? what's that?) Brian and Kelly led us to the Gold Hill Trail up the road in Dillon and we went for a nice recovery hike along the Colorado Trail. 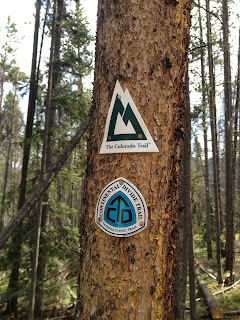 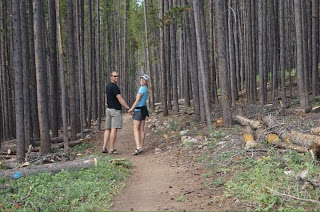 The Brelly headed out the next day to continue on their own Colorado adventure, and Geof and I went back to the Gold Hill trail to kick off our long run from Dillon to Breck and back.

Going through my photos (there are SO MANY) I noticed I got a bunch of the sky.  Colorado skies provide an endless amount of visual stimuli...not to mention the mountains.... 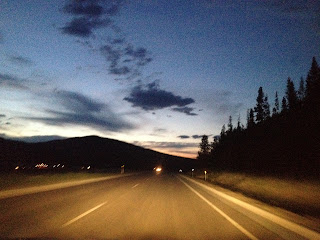 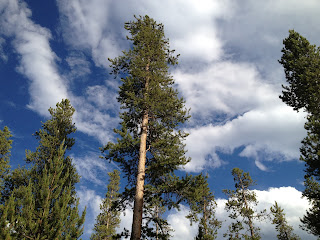 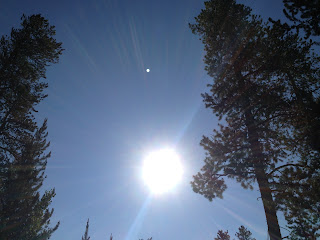 The next day we bid Breck goodbye...but first we took in all the Fourth of July festivities and walked around town for a bit.  That town knows how to celebrate Independence Day, hooweee! 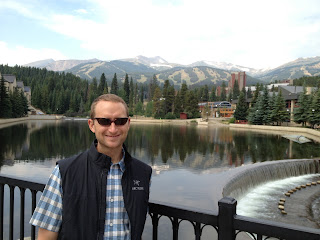 Breckenridge ski slopes in the background...sans snow.  So cool.

We were ready to get back on the road.  Julia mentioned that the approach hike to Kit Carson Peak (a 14er) was phenomenal so we aimed south to the Sangre de Cristo range.  It was getting late so we found a nice little campsite along the Arkansas River, in Buena Vista, CO.  We finally got to use our new sleeping platform, and the weather was perfect for it... 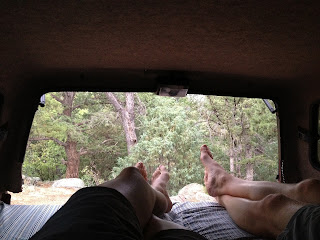 After a great night of sleep, and a little rain, we packed up and made our way to Crestone, CO...a teensy, teeny, tiny little town waaaaaay out there.  To get to Kit Carson's Willow Creek trailhead we had to take a bumpy 4WD road up.  We opted for the shorter/easier route...the Willow Creek approach, which was supposed to be 11.2 miles roundtrip.  Totally doable.  Except that I was scared out of my britches about the class 3 designation the trail was given...um, I'm kind of a whuse and exposure and scree skiing aren't two of my favorite things just yet.  But, when in Rome.

I pulled out my Leki trekking poles for the first time ever and we hit the trail around noon.

I was terrified, but up for the challenge.

This was some of the most rugged country I'd experienced to date and Geof stayed close by rather than running up ahead on some sections.  When he turned to me and said,"I don't know how to say this without scaring you, but I think we need to stick together today."  Message received.  We were officially in wild country and who knew was was lurking around the many corners we were turning on this trail.  We whooped and hollered our way up the trail, smacking my poles together every so often, clapping, talking loudly.  No worries, we only encountered a few other souls on the trail so I wasn't too worried about ruining anyone's peace and quiet :)  Hello, bear country.

We arrived at Willow Lake and I pulled out my phone where I had taken a picture of the trail description.  The trail had officially petered off.  None of the trail was marked at any point so there were no markers to look for and no cairns.  We tried a few different animal trails to no avail before finally pulling out a compass to direct us.  Okay, I've never done this before and the Girl Scouts only taught me how to build a dollhouse, not orient myself on a trail.  This was new territory for me in many respects, but I felt pretty badass using a compass to point us in the right direction ;) 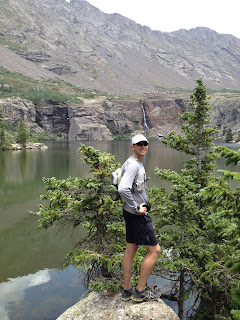 Geof at the south end of Willow Lake...we needed to get over to the waterfall in the distance 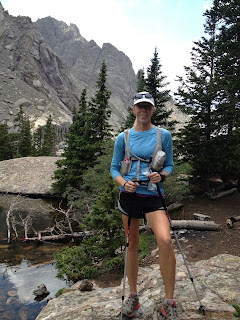 Eventually we found a very vague little trail that petered off again, this time into a boulder field.  Luckily, Geof's eagle eyes saw a cairn part way across the field (which spilled steeply into the lake below).  We picked our way across, crossing paths with a couple coming back (yay, confidence!) and finally made it to the waterfall...and thick black clouds moving toward us from over the peaks in the distance.  And now we were totally exposed.  We looked around some and found another cairn.  Then another, then another.  I glanced at my Garmin and saw we were over 5.6 miles in putting us over the originally stated round trip mileage.  Huh, weird.  We were nowhere close to being done. 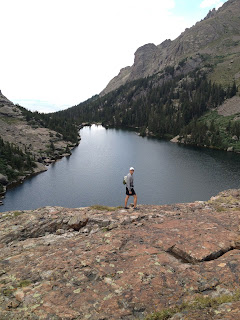 Geof now standing on the other side of the lake, near the waterfall.  Pretty!! 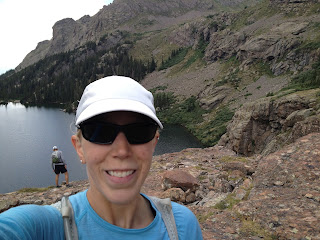 What's he doing back there?

We hemmed and hawed a bit, glancing around us.  It was clear we either had a long way to go still (and 2,000+ ft yet to climb), or we were going to need to climb straight up a face.  Something was amiss, and a look at the late hour, and watching the clouds move quickly over us, followed up by a loud crack of thunder we hightailed it out of there.  Not worth it!  So, we made it to about 12,000 feet and nearly 12 miles.  The run down was fabulous and fun.  We never did get rained on, but we watched the weather from back down in Crestone and decided we were very glad we turned when we did.

I checked the trail description against our map back in the car and found where we went wrong...we were following a much more technical route once we hit the waterfall and were well off course.  Ah well, we'll be back, and we'll start at a much earlier hour next time :)

Great Sand Dunes National Park was in the area and since we had some time left in the day we decided to head over to check it out and see what the camping was like.

SO COOL!  There were just like the high mountains, except made out of sand, and surrounded by high peaks; it was heavenly!  It could not be adequately captured on camera, so believe me, you HAVE to see this place! 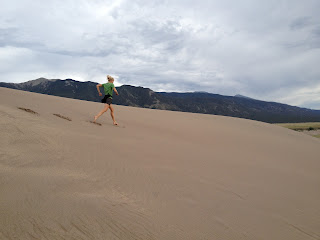 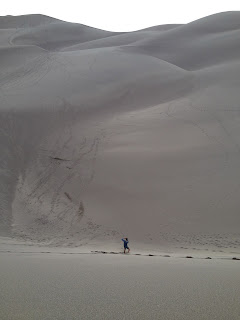 Geof ran down into a sand valley waaaaaay below me

Our quads and calves were sufficiently burned up from all the running around and up and down in the dunes after an hour or so and the sun was beginning to set so we headed towards the campground to see if there were any sites available for the night.  The campground (within the park) was great!  Big sites, tables, bear boxes for food, clean bathrooms and super quiet.  When we arrived, we met our very first bear...a cute little guy just looking for slugs.  Guess we'd be making use of our bear box!! 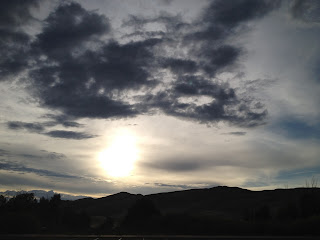 Sunset over the Great Sand Dunes

I slept like a friggin' baby that night, even though I was totally spooking myself :)

In the morning, we had a craving for some Leadville action and much thinner air, so we closed up shop and headed out early so we could set up camp in Leadville in time to squeeze in a run around Turquoise Lake and enjoy a High Mountain Pie for dinner :)  Priorities!

The Sugar Loafin' campground in Leadville is pricey (for camping) but was exactly what we needed (and how can you turn down nightly ice cream socials?!), so we checked in for two nights.  After a nice easy 8 mile run along the shores of Turquoise Lake (so beautiful), our much needed pizza recovery dinner, and two bowls of ice cream at the social, we slipped into our tent...to "enjoy" two straight days of rain.

Well, there are few greater motivators than crappy weather combined with a tent.  We needed to climb high and get the blood pumping...

This is great, Paige. My husband and I had similar adventures (jeez, going on 20 years ago now, though it seems like yesterday). And now we tell our kids about them (that really DOES happen!). I'm so looking forward to getting back into the real mtns one of these summers! Thanks for the inspiration....

Glad you are enjoying "our" state. neighbors ;-)