"He is able who thinks he is able." ~Buddha 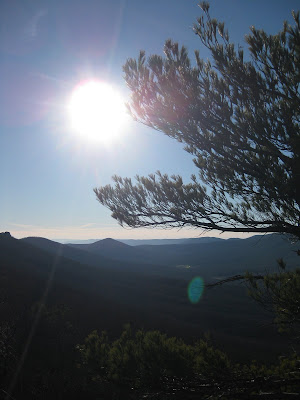 Ah bliss, that's how it feels now that I've gotten my long run out of the way. I didn't have a chance to get to it this weekend as I was cooped up in a windowless classroom cramming for the GMAT. I learned that my gym now closes at 6:30 on weekend nights. I missed the memo on that one, as it used to be 8:00. I also learned that fractions are my very worst enemy. My brain hates them so much it goes on lockdown and refuses to make any logical sense of numbers and words. The worst was when a problem came up that was a word problem that used fractions, percents, logic and long division. I could normally handle the other stuff, but since the fractions were 'touching' the other math portions I couldn't function. Kind of like how I don't like my peas to touch my mashed potatoes. Gross.

Ok, I digress. So I took today off work to decompress from the weekend, and decided to make good use of the "warm" weather we were blessed with. Sun, not a cloud in the sky, and a downright balmy 28 degrees! I mean could you ask for better weather?! I had fourteen miles planned as my long run so I hopped to it and dragged my ass around my condo for an hour while I got ready, prepped an electrolyte drink, dug out some Gu and huffed and puffed about losing my favorite Smartwool running gloves. I had on two pair of running tights, a pair of wool snowboarding socks over a pair of Mizuno Breathe socks (that totally rock, by the way), my Cascadias, three tops under a windbreaker jacket, neck gaiter, hat and gloves. I remembered to grab sunglasses on my way out the door, and I'm really glad I did.

I decided to skip doing my usual on the lakefront path, and instead keep to the sidewalks where there was plenty of distraction and people watching. I ran straight down Broadway to Clark, cut over to Wells then turned on Wacker where I then turned onto Michigan all the way to Roosevelt. I weaved my way through Millenium Park, a bit of the Path, and then decided to avoid the gusty wind and stick to the sidewalks again. It was cold! I hit 14.1 miles with about another mile to go before home, so I fast walked it in. I felt great, but completely wiped out. The cold really started to get to me once I turned and headed back north. My layers were perfect and kept me really comfortable, but my neck was a little exposed and that, my friends, is my achilles. I can be completely wrapped up and cozy, but if my neck gets so much as a breeze on it I'm done for. I know, weird. It felt SO GOOD to get out and pound the pavement for a couple hours. I didn't feel rushed, or pre-occupied or worried about anything. I was just running, and totally enjoying myself. I need more of those runs :)

One minor annoyance: what's with people not moving out of the way when they see you coming down the sidewalk? C'mon! The sidewalks were even narrower because of how they were shoveled (basically the width of two snowshovels), but still enough for two people. Everytime, as I approached people in the opposite direction, we'd make eye contact (so I knew that they saw me!) and then they wouldn't move out of the way! Hello, there's sidewalk etiquette: keep to the right...and don't step in front of people coming towards you. People walking two wide really got on my nerves; you're supposed to step in front of or behind your buddy when someone else is trying to get by you. I plowed through many a snowdrift to get around people like this...I would even say "excuse me" or "pardon me" and they would just look back at me and continue on as if I weren't trying to get by. Jerks. Trust me, I'd rather be running in the bike lane in the street, but with how slippery it is right now, I'm not willing to risk my life at this juncture. That's reserved for trail racing :)

Speaking of, New Year's was rockin', and naturally involved some trail running. I flew out to spend the holiday with Mike and that Saturday we decided to give the Big Schloss Trail a go. It was a good couple hours from D.C., in the George Washington National Forest, near Front Royal, Virginia. Absolutely gorgeous! I bet that place is just out of this world in season. We kept to the main trail and got exactly 10 miles in on some really awesome single-track. It was the last day of hunting season (which we didn't know about until we got there and asked someone), so it's a good thing we had our reflective gear on :) It was cold and there was some evidence of recent snowfall on the ground. I misjudged some footing on numerous occasions and got a freezing cold reminder that not all the streams were frozen over. Always on my right foot, too. It was a challenging trail, with plenty of rocks and whatnot, actually a lot of rocks. The first half was all uphill, at a decent grade, but not so bad you couldn't run a good lot of it. The second half was all downhill which we were thankful for as we were able to let loose and run. 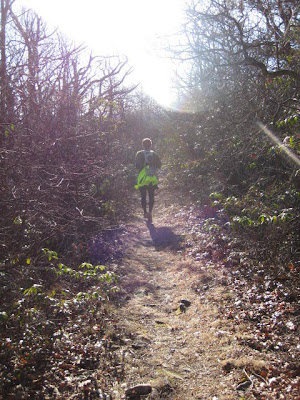 Mike on the Big Schloss Trail

At the top, we stepped off the trail at an overlook. Beautiful! We couldn't have had better weather, or a better view. 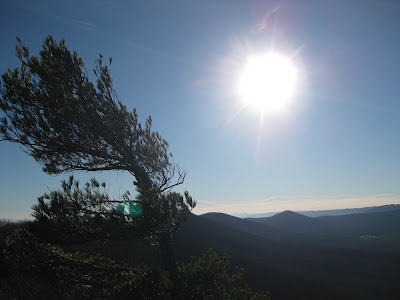 Looking over the valley, atop the Trail

We considered our pace and that the sun was falling fast, so we decided not to do the out-and-back portion that would have taken us to the Big Schloss (meaning "castle")...it's a big rock formation at the tip of one section of the trail. It was getting cold fast, too. 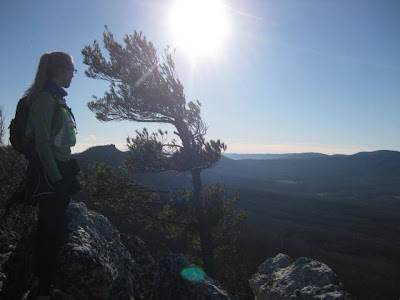 Checking out the view...totally worth the climb

On the way back down, we came across a section that was like a mini boulder field. It looked cool, but definitely wasn't runnable. Considering my nack for taking one big spill during each trail run, I decided to be extra careful. 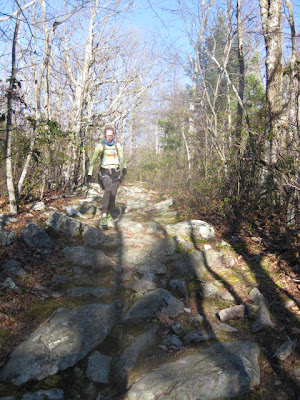 Gingerly negotiating the rocks, they were begging for me to fall :)

So I made it down through the rocks, and as soon as I got to a flat section, you guessed it, I bit it hard! This was by far the worst spill I've mustered. I don't even know what I did this time. I layed out completely, somehow managing to turn myself enough so that only my right side made contact, but I still slide a few inches on my right knee and forearm. Wow, it stung! Tears sprang from my eyes from the pain as I rolled onto my butt and sat there in shock. I was laughing all the while. Mike comes running back to check on me, with words of support, "Next time can you not move and let me get a picture first?" That made me laugh even more :) My knee stiffened up quite a bit from the impact; as I got up to continue on I looked back at the rocks I had descended and couldn't believe how lucky I was to have fallen where I fell. Wow! That'll wake you up! I actually managed to draw blood this time, but we still had plenty of trail to cover. Onward!

On the last quarter mile, we were on gravel road. We passed a huge hunting posse of about 20 or 30 guys in camo and orange gear with shotguns. Now I've been leered at before, but this was a whole new kind of leer we were getting. Yikes! Mike said it's a good thing I hadn't seen Deliverance...afterall, we were in the mountains, and the trail bordered West Virginia. I felt slightly outnumbered. Not to mention we looked pretty funny compared to those dudes, in our running tights and camelbaks :)

I love trail running, but it is a sort of exhaustion that eclipses your basic everyday exhaustion. It felt great to get back to the car, and get some food in our systems. 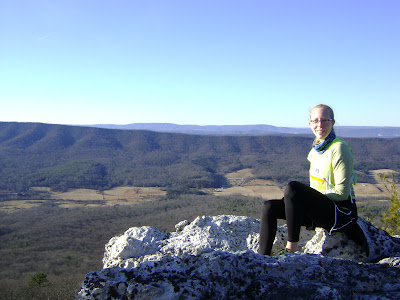 Atop the trail, overlooking a valley in the GW National Forest

My official countdown to McNaughton Park 50M hasn't begun yet, but I'm well into my training for it and am really happy with the run I got in today. I've never run that long on my own so it's nice to know I can manage it alone. Getting out there solo can be difficult, especially when it's so cold out, but there are worse things. Like sitting on your butt watching bad TV when you could be out running! I'm so ready for the spring, and for earlier sunrises :)

Ok, figured I would chime in to let you know someone is reading :) Great recaps. I too got a long run in today - amazing how the rest of your day is full of sunshine following a run. As for your clothing choices - did you completely overheat? Yowza!! That's a lot of clothing!

Phew, thank you for the fraction conversion...my brain almost wigged out! I didn't totally overheat, I was really comfortable until the wind picked up on my way north and I got a little chilled. I'd do it again, though :)