Winter running, it ain't so bad.  So long as you're prepared and dressed smartly, you're sure to have a grand old time.

That sorta reminds me of an old timey sales pitch.  It sounded different in my head :)

Anywho!  I've been having fun squaring away the final miles of 2010 (I finally surpassed 2009's miles, woohoo!  Final number to be revealed soon...) and getting in some much needed snow running.  I had forgotten how much I really do enjoy running through the snow.  Snow makes everything pretty.

Speaking of snow, Geof and I spent Christmas Eve in Eastern Iowa with some of his family, and we were lucky enough to reap the rewards of a solid snowstorm from earlier in the week, and even into that evening.  After scarfing a most delicious dinner, seeing what Santa brought all the good little kids (yes, we were very good this year), and taking a tour of the Christmas Lights display in town, Geof and I headed out into the backyard and relived our youths...we romped around in more than 14 inches of fluffy gloriousness!  Bundled up in our finest snow clothes, you'd have thought we were little kids seeing snow for the first time ever.  We were runnig and diving into it, completely fearless; I even ate some snow, on purpose :)  Snow angels a'plenty, powder balls a'flying, making sure there wasn't a single un-played-in area of the yard.  Out of breath and smiling ear-to-ear, we eventually laid down in the snow, temple-to-temple, staring up at the dark sky as snowflakes fell silently.  It was just perfect :)

Sunday, we decided it was time for another run after taking a couple days off.  We were back home, and headed onto the path for a solid 8 miles.  Unbeknownst to us, the path hadn't been plowed yet, so we were treated to a thick, fluffy layer of snow the whole way; sweet!  I was testing out the newest addition to my winter running wardrobe, and after a second equally snowy and cold (yet still somehow quite sweaty) 5 mile run on Monday in the same shirt (ewwwwww, groooooooosss), the verdict is in: the Icebreaker Bodyfit 200 long sleeve shirt is the bomb diggity.  One run is usually enough to tell what I'm going to think of something, but this time I needed a second opinion.  You see, Icebreaker is supposed to, among other things, not be stinky.  It's that whole merino wool thing.  I seem to be pretty good at stinkifying running shirts, or at least leaving a deodorant scent.  Not so in my new threads.  I aired it out overnight on the drying rack both times (like I do for all my sweaty running clothes), and the next day the shirt smelled like it did fresh out of the package (which is this really cool slider cardboard box).  Hmmm, interesting.  Still no stank.

Oh, here's a picture of the shirt I got (I ripped it from the Wilderness Running Company website): 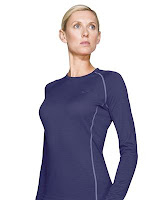 Maybe for Halloween I'll dress up as the WRC Icebreaker chic...we are practically twins ;)
So I'm thinking I may be falling in love with this shirt...oh, wait, yep.  I am.  Luckily, I had top notch foresight and decided to get a shirt for Geof, "from Santa".  He was gifted with the Icebreaker Bodyfit 150 Atlas Crew﻿, and I'm pretty sure he loves his as much as I love mine :)  It's one of those shirts that will become a serious staple in our closets...they're super versatile, and we like versatile, especially when traveling and what not.  Now I want one in every color, long sleeve and short sleeve :)
Okay, enough of the pitch.  I just get so excited when I find really great gear.
Next up, I'm looking forward to taking my new Yaktrax Pros for a spin on some ice on New Years Day.  Geof's the best Santa ever :)
Crash, out.
Posted by Paige at 4:54 PM 3 comments:

Serious Case of the WooHoos! 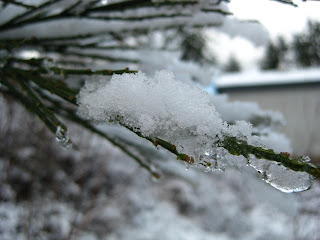 Photo Courtesy of my Dear Friend Google
I was right, today's run was way awesomer :)

We got a good 3-4 inches of fluffy stuff overnight, followed by a sprinkling of freezing rain, so this morning's run was intermixed with the two and made for a truely lovely run, albeit a little scary.  The slick stuff was hard to spot as it just looked like wet concrete, but I managed to stay upright, woohoo!

Today is quite a big day...it's the first day of winter, and, therefore, the winter solstice, and it is precisely five short months until Geof and I march down the aisle together.  Woohoo!

Serious Case of the Slugs

We ran this morning and I was soooooo not into it.  We all have these days, you just are never really sure when they are going to pop up.

I woke up actually awake and with the plan of running.  I was particularly excited last night when I saw that the high for today was in the 30s (sweet!!), and when I checked the weather this morning, it was at 17 degrees (bam!) with zero windchill, specifically "calm" (double bam!).

We bundled up just a touch less severely than last week, in hopes of a 'warmer' run.

It was so not "calm", and definitely not warm.

And, my legs had other plans for me today.

I was cold the entire run, and my legs felt as if they were caked in a thick, heavy layer of cement.  My feet didn't know what they were doing; I found myself looking down at them more than a few times to make sure they were actually still there.

We were barely 3/4 of a mile out when I slowed completely to a walk, Geof's arm around my shoulders.  I considered turning back for home, but after I whined for a moment, and frowned the ultimate frown, we picked it back up and continued on down the path.

I don't end my races because I'm sluggish or in a less-than-awesome mood at points, why quit a training run?  It's just a phase, I'll get over it.

I didn't get over it, but then again, it was only 4 miles.  Had I had 96 more miles to go, I definitely would have gotten over it eventually :-)

Ah well, this run gets filed in my Character Builder tab.  I haven't had one of those in a good long while, so I was long overdue.

Tomorrow will be awesomer.

This morning's sunrise looked an awful lot like a sunset.  The colors were more sunset-y than sunrise-y...lots of pinks and purples and end-of-the-day colors.  I stared at it through our living room windows, willing myself to get excited about running in the chill again.  Winter running requires a great deal of motivation and will to get out the door.  It's amazing.

Ya know when it's super, super cold out and, even if there wasn't any snow to be seen, you could still tell it was frigid out?  Well the ground is still pretty well covered in snow here, and the lake is frozen in time under a thin layer of ice for about as far as you can see, but still.  You could tell it was bitterly cold out just looking at the horizon.

We opted for another short, fast loop this morning, around the Pier and then some.  It was pretty chilly (17 degrees with a wind chill of 7), but it somehow felt considerably warmer than the last couple of runs of similar temperatures.  I had some spring back in my step this morning, so that was cool.  It is also cool that the Pier has been salted and de-iced to my liking :)

Supposedly we are getting more snow tonight, yippee!!  And tomorrow's forecast has more of it, too.  Then again, you can't trust a Chicago weather forecast that is more than 5 minutes old...and even then it's pushing it.

That was a long stretch of radio silence I had going there...yikes!  But have no fear, I'm still running, albeit in a much more watered down version.

In the wee hours of the morning on December 4th, Geof and I emerged from the warmth of the Double Door, after witnessing a seriously amazing show by my brother's band, How Far to Austin, to find that the city was hushed by a thin layer of fluffy white snow...oh glorious winter!!  My ears were shot from standing practically IN the speakers for much of the night, so stepping outside into the snow was positively deafening.  And beautiful.  Old man winter was making his presence known.

This morning was our first truly frigid and wintry run, and it was great.  I felt a little like a fish out of water; the cold is so much earlier than last year it seems.  We bundled up, unsure of what to expect once we got outside.  The temperature read 12 degrees, with a windchill factor of -2.  Yowza!  Since I am paralyzed with fear when it comes to ice these days, I opted to wear my trusty Sporty Cats, the originals, and just go into rigor mortis as soon as I saw any patches of anything resembling ice before proceeding along the path behind Geof.  I really don't want another spill!

We opted to stay on the upper section of the path, and it was mostly free of ice patches, save for a few sketchy random spots.  Somehow I managed to stay upright :)  We squeezed out five glorious miles, misfired snot frozen on my cheeks and my mouth frozen in a smile.  As uncomfortable as bitterly cold running can be, it sure is rewarding.  Kinda makes you feel like a rockstar.

Though, I'd be lying if I said I wish I were training for a hundo in this weather :-)  Geof and I were just picking the training up right about this time last year, getting ready for Rocky Raccoon 100M.  I had a dream over the weekend that we were running Leanhorse 100.  Hmmm, interesting.

I'm looking forward to breaking my fear of ice this winter.  Or at least acquiring a pair of Yaktrax to make it slightly less paralyzing.  The ol' screw shoes will certainly make a few appearances as well.