That's more or less what we've been doing of late.  We decided our training for Zane Grey did us well (despite any appearances to the contrary...i.e. the slow finish time) and have opted to continue on with it, and play around and tweak it here and there.  We don't have anything on the immediate horizon as far as racing goes, but Geof does have Wasatch 100 come early September.  I, however, have no races scheduled for the rest of the year...but that won't last very long :)  I wanted to wait until we knew where we were moving before I made any racing plans.  Now that that's squared away, I really want to race...like now.

What to do, what to do?  Well, until I figure that out, I'll just keep on training like I've got something coming up :)  Besides, racing is merely a vehicle for training.  I really love the training part.  Hopefully we'll happen upon some dandy looking race in our travels this summer and can drop in on it.  We'll see!

Meantime, the training.  It's very complicated and filled with numbers and formulas and big words that sound like they're made up, and lots and lots of weird runnery stuff and crazy sounding nutrition plans.

There you have it!  We did maybe four actual long runs (20+ miles and one 31 mile run) leading up to Zane Grey this year, and the rest of the time it was 3-4 runs of at least 10 miles, and 1-2 runs of 3-4 miles.  The key?  Pushing the pace.  These were more often than not pretty fast runs.  Even the long runs were fast by my standards.  The 3-4 mile runs were our version of speed work and usually left me gasping for air.  The 10 mile runs started out very mildly paced back in February, and we've now dropped about a minute per mile off our former typical pace, and always end with a negative split in the second half.

Generally, I'm running based on feel.  I try not to glance at the ol' watch too much, but it happens.  Curiosity and what not :)  But here and there I'll purposefully push it, or Geof will drag me along.  So it feels good to see such massive improvement on my part without really aiming for it.  It just happens.  You run a lot, and eventually you adapt and get better and better.  Put in the work, reap the rewards.  One of the many things I love about running!

Last week, we decided to run 10 milers every day.  My legs wanted a break bad by Wednesday, but we kept on keeping on and closed out the week with six 10 mile runs, taking Sunday off to rest and start again this week.  It was fun, and a little bit tough for some reason.  I felt the absolute best on Saturday, with 50 miles already in the tank.  Each run got a little better throughout the week, thus driving home the fact that I'm made for this stuff :)  But all this road running is making me ache.

I love the 10 mile distance.  We haven't really been craving long runs lately, so this is a great way to still get in the miles and it allows for quicker recovery (as opposed to long runs).  A 60 mile week is solid for me as I haven't hit that mileage much in the past, but I am embarking on a new chapter and it includes higher mileage.  Time to remind my legs who's boss!  I aim to make 60 mpw the new 40-50 mpw :)

Hey, remember that time I ran my first 100 mile race on less than 30 mpw?  Yea, that was silly, and I can't believe I did that.  It works for some (like you, Brian!) but boy is it more fun to run more nowadays, and very rewarding.  My how I've grown.

Today, I am pooped!  I think the moving stress/anxiety/awesomeness is wreaking a bit of havoc on my running/general mental state so this week has been a little hard on the bod, but I have faith it'll bounce back just fine.  Just this morning I was lamenting my aching legs and body, to which Geof said to speed it up and everything will feel better (I think his exact words were,"we're going too slow and not running far enough."  True story.)...my head was trying to take the reigns.  So, I did just that, I sped it up, and I found my groove.

Paige got her groove back.  At least for this morning :)

I sorta wish I were running Kettle Moraine 100 now, but not really.  I'd want to crush it and I'm not feeling totally crushy right now.  So, we'll settle for watching other people crush it out there next Saturday instead :) 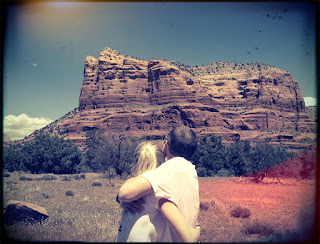