Today, I took to the trail for my first run since the LBL 60k last weekend. I took a full seven days off, totally running-free. And you know, it wasn't all that bad. It is humbling, in a good way, to feel so meh and spent after a race, enough that you know you need some time off. Even though a week isn't all that much, it was a lot for me. The last two races, I was running after four days. Probably not the best idea, but I felt fine those times and was ready for more. This time, I just wanted to relax (and eat! Which I did more than enough of...I'm pretty sure the amount of food I consumed in the last week could have nourished a small third-world country for a month). Interestingly enough, this time I had no post-race soreness. Zip. I think I owe that to the huge amount of water I consumed after the race, all the icing I did in the 48 hours afterwards, doing lots of post-race walking around to get the junk out of my muscles, elevating my legs much of the night while I watched TV, and I also wrapped both lower legs in Ace bandages for the 7-hour carride home the following day. So I think those things really made all the difference. All I had to deal with today was that heavy, lead-like feeling you get after a hard effort.

My favorite, convenient trail around here is: 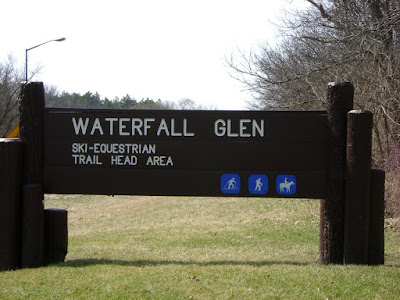 Super easy to get to, and it's a perfect central meeting point for me and for running partner Gary. I got there a tad before him and got situated. It was tough deciding whether or not I'd wear my Nathan vest, but in the end I went with it so I could carry my camera. It was in that gray area between slightly chilly and slightly warm so I wore my giraffe Moebens to start...they are so comfortable, and silly enough looking that I'm pretty sure I'm smirking the entire time I have them on. I also decided to trail test the CW-X Ventilator tights I got recently. I thought I'd see if they live up to all the hype (and price!), and who knows, maybe they'll make my knees smile a little more :) Oh, and I of course had on my fav short sleeve 4R's Atayne top on, as well as my Cascadia 4's (heaven on feet). Naturally, I was a little sad they didn't make the 4's in neon green, but I think I enjoy the turquoise just as much :)

The day turned out freakin' gorgeous! I would venture almost so far as to say "a tad on the warm side". Not five minutes into the run I peeled off the Moebens and my Buff and stuffed them in my vest (glad I decided to wear it!). The sun was out, no clouds to speak of and there were people galore! Mostly cyclists (who served only to muck up the gravel trail and turn it into a rutted mess), and birdwatchers, but a few other runners here and there. I just can't believe how beautiful it ended up being. Once we got towards the west-most section of the loop, there's a swampy area. We actually stopped to look around because there was this deafening loud chorus of frog chirping (or whatever it is they're doing) coming from the swamp area. It was so cool! I've never heard anything like that before. It sounded as if there were hundreds of frogs all singing together. Love it. Love spring. Love trails.

Then I remembered I had my camera so I snapped some shots. There's an old un-used (I believe) rail bed that runs along parts of the main loop's perimeter, and on the other side is a pond. My favorite section for some reason... 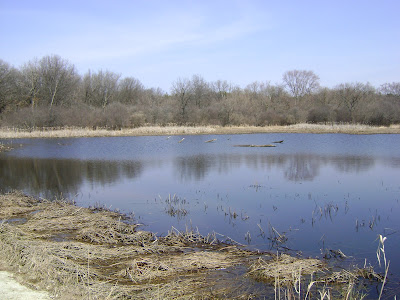 "Gary, look like you're deep in thought." Okay, so much for that, but that's running partner Gary. Fellow Beer Runner dude, and he's training for the Wasatch Front 100. Yikes! That's hardcore, and quite a race to choose for one's first 100-miler. Maybe I'll get to pace...mu hahaha ;) 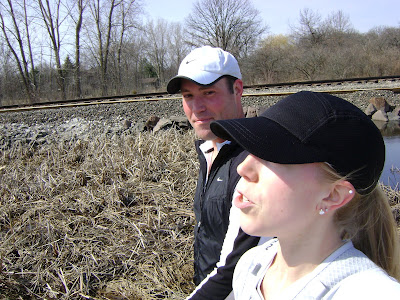 Today was tough for me. My body felt ready for the run, but my legs and feet were objecting quietly most of the run. It felt like we were running uphill the entire time, and then on the two downhill sections (which are really not that bad) my right knee was singing acapella. In a very high-pitched tone. Incessantly. So then I felt the damn thing the rest of the time. Then my right shin pitched in a little. But these are hardly anything new these days and I expected to feel these aches. I just felt so darn taxed and I was huffing like it was my first run, ever. Gary was doing great, especially considering he knocked out a nice little 24-miler on Friday, on his own. I downed most of my Nuun in the hour and a half we were out, and a couple Mixed Berry Clif Shot Bloks (yum! Love the flavor). I kept thinking about the cold chocolate milk chug I had in my car, and banana. I came better post-run prepared this time.
In all, we cranked out the full loop, which is 9.5 miles to the parking lot. I initially wanted to do 10, but we both opted to cut it at 9.5. Our cars were beckoning us. Good, tough run. Beautiful weather. Lovely day. This was another one of those character-building runs that my legs are so fond of these days. I walked more than usual, but I needed it today. Afterwards, I lollygagged at my car which had a nice patch of grass next to it and I stretched for awhile and practically inhaled my chocolate milk. Does a body good :) 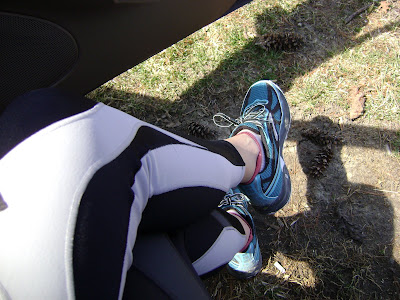 Happy legs...done for the day!

No wonder you're hot with that black hat! And where's the pearls?

The trail looks great. Nice pics. "And then I remembered I had my camera." I've done that one before. Lugging the darn thing around and forgetting to use it. Good run.

But I love the black hat! You're right though, I may need to switch to white as it gets warmer out. The pearls are for races only, at least for now. I think you're onto something though...maybe I should have a training pair, too. Hmmmm :)

Ski and equestrian trail? You need to go gorilla on the Waterfall Glenn sign and put up a trail running / ultra running logo! Nice little blog post...glad to see you've moved away from talking about high heels ;)

Ya know, I thought about that...changing the sign ;) Maybe on one of my night runs there I'll "go all gorilla" on it, lol. I can at least put an I Got Trashed sticker on it. Now THAT would be funny.