This weekend was fan-friggin-tastic! I just had an all-around great time, and one of the best parts? I found new trails! On Saturday I decided to check out the trails that the Sunburn Six in the Stix 6-hour run will be held on since it's nice 'n close to home. James Pate Phillips State Park is a gorgeous little hidden gem tucked away in Bartlett (?), IL and I was able to squeeze out 4.2 miles from the three different loops there, without repeating any of them. It's very open, no trees, and the trail is crushed limestone. At points, it is rolling, but nothing you can't run. Towards the end of the last loop, I came upon a big blob in the middle of the trail. I couldn't quite tell what it was from afar, but it was moving! I almost turned around, but decided to creep up on the blob...it was a big friggin' turtle!! Literally, he was as big as my torso. So cool! I've never seen anything like that before. I capped myself at the 4.2 miles as I felt great and didn't want to push myself too much since it was my first run since my 50 miler a week prior. I'm excited to have a new trail to head out to close to home.

Today I knew I wanted to head out for another 4 miles, but was just going to run in the neighborhood...boring. It was raining the entire day, and after a couple naps and some pizza :) I decided to be a little more adventurous and check out another new trail I'd never been to. I threw on my rain running gear, grabbed my camera and hopped into the car. Enter: 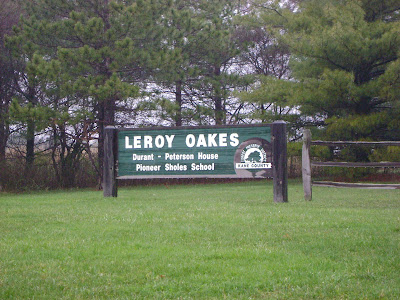 When I got there, I followed the road to the end, checked out the map and then drove back to the entrance, where I hopped onto the nearest stretch of grassland trail. I had no idea where the trail was going, and there were numerous trails branching off of the one I was on. So, I decided to just go with the flow and hop on as many of the branches as I could and see where I would end up! 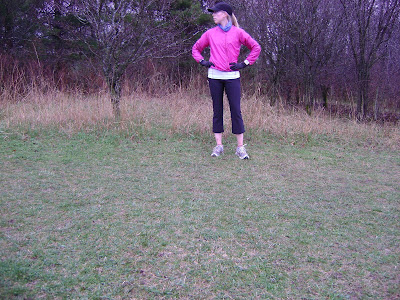 Hmmm, which way should I go?

I wound around some stretches and started up a decent climb for a good view of the preserve... 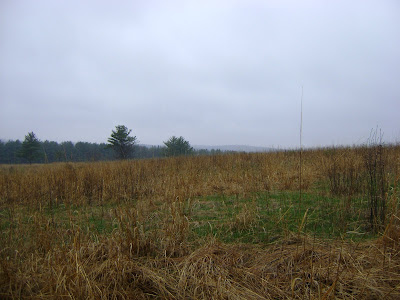 Everything was started to bud and bloom, and it all looked so cool in the rain... 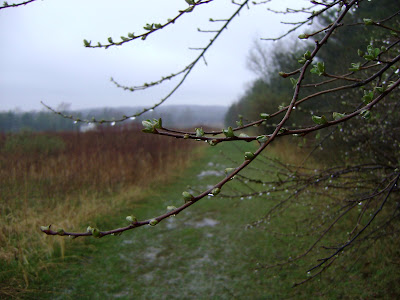 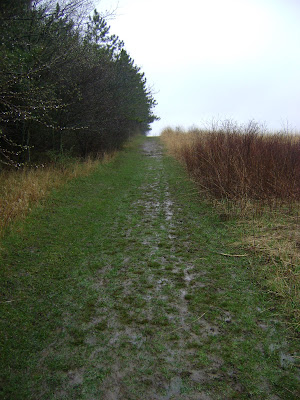 And then, the greatest thing appeared before me...SINGLETRACK!!! 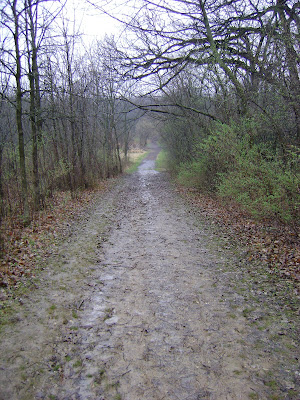 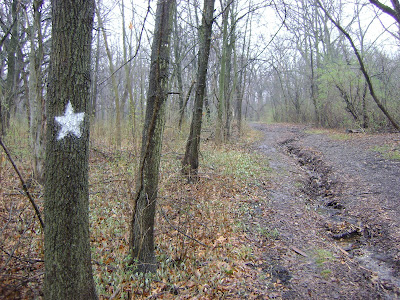 These stars were on a bunch of the trees...I'm assuming they were trail markers, but they were really inconsistent 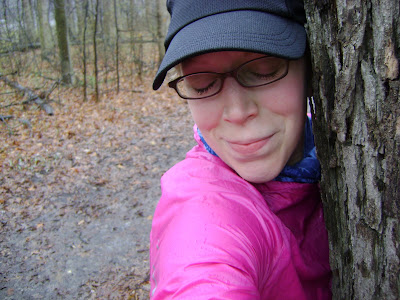 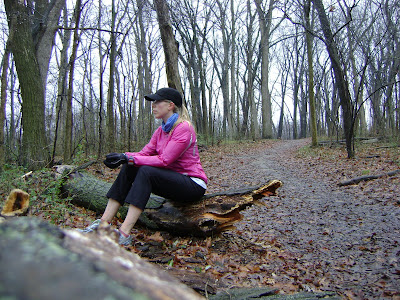 Taking a break, catching a glimpse of the stream that ran through much of the preserve 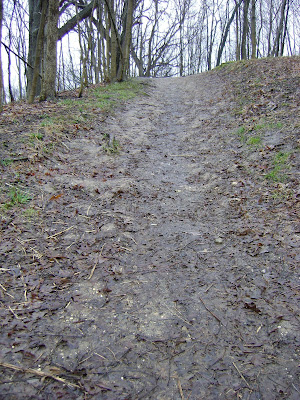 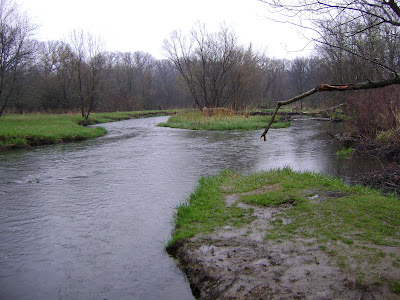 I found a part of the trail that branched off and brought you down to the stream...it was really pretty 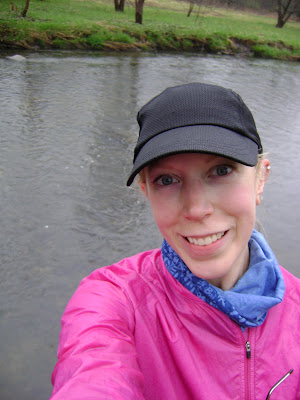 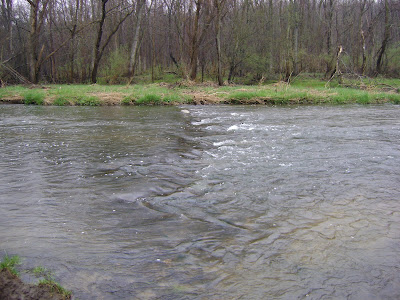 It was tempting to cross here since it was shallow, but I decided I'd give it a whirl next time, and with a running partner in case I "crash" :) 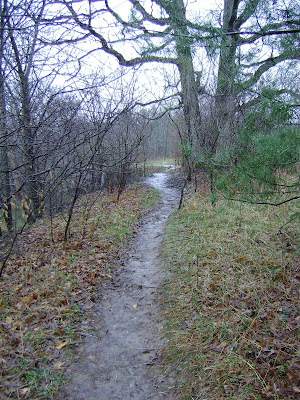 Seriously, this was glorious! Does it get better than some muddy singletrack on a random Sunday? 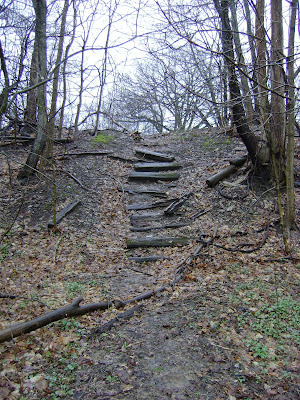 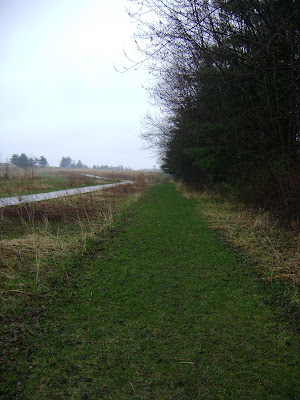 Back on the grassland trail section, winding through the interior of the preserve 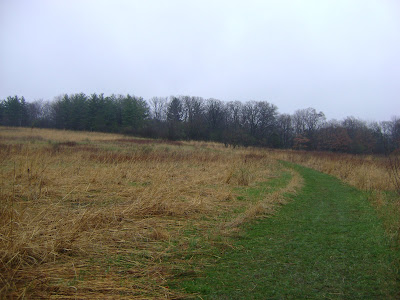 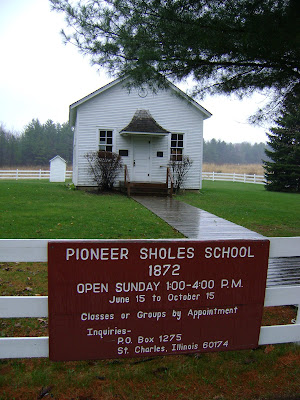 This is in the middle of the preserve...I took a peek inside and there were old-fashioned school desks in neat rows, a chalkboard and an early American flag hanging in front...it was really cool! 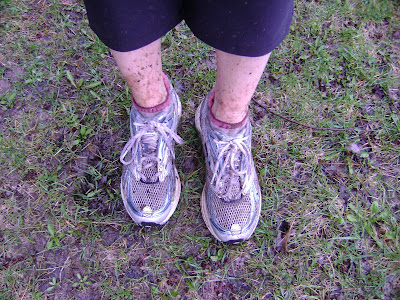 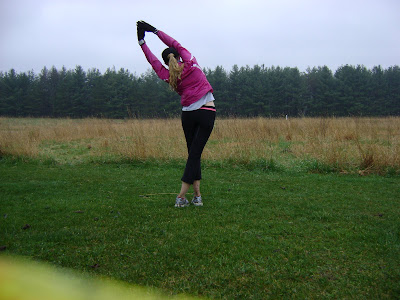 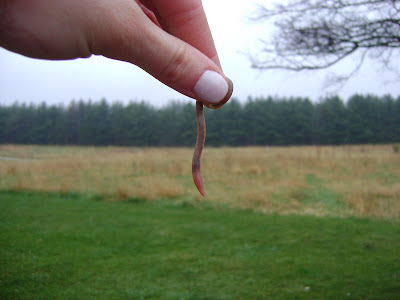 Walking back to the car I saw this little pipsqueak on the ground and, remembering a recent thread on the List, decided to save a life today and put him back in the grass :)
This was a fantastic run and I plan on going back, often. It was a mix of flat grassland trails, muddy singletrack, pavement and some very nice climbs and views. I got 4.45 miles in without repeating any section of trail. I planned on just 4 miles today, so I'm pleased with how it all turned out, and my knees appreciated the cushy trails. The really cool part was that I was the only person in the entire place, the entire time! One car drove in as I was leaving. It was so fun to have the whole place to myself. Check it out if you're ever in St. Charles, IL :)

I trained for my first marathon across the street at the Great Western Trail. I never knew this existed. Looks like a great place for a looped 50K Fat Ass event ;-).

Thanks for posting Crash. I definitely want to cross that stream and see where it takes me.

Ya know, the entire time I was there I was thinking about how cool a FA 50k would be there...

Fun! I love this kind of post. The bread-n-butter runs. Day in the life. Keep on keepin on!

Done and done. We are SO making this happen...it can be the second FA in the new Chicago Ultrarunners racing series :) Love it. A bunch of us should meet for a run there soon to pick a loop, and figure out what's on the other side of the river. So fun!!

Yes, a Chicago Fat Ass Trail Series ("ChiFATS"?). McLovin' it! I'd like to play around there maybe Saturday and scope it out. I don't need a bunch of people for me to cross wade through that river to get on the other side ;-).

Could make for a nice Fall event.

Ha! ChiFATS, that's great! Well, make sure you have Kelly with you at least...so if you fall someone can get pictures! Hehehe

I actually might be out there, too, Saturday afternoon or early evening as well. Depends on what I get into that morning.

How did you manage to stay so clean running in all that mud? :-)

Paige. Two great run reports. I enjoyed your LeRoy Oaks trail report; I need to check that out. Maybe a Chicago Ultrarunner group run one weekend (Palos this weekend). Thanks for posting Ian

Dan, musta been the pearls :)