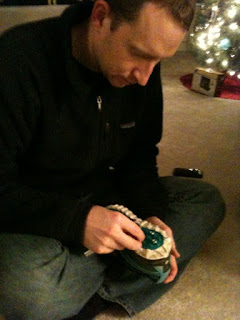 Literally, screw shoes! That's Geof, above, installing the screws in an old pair of my Brooks Cascadia trail shoes.

I decided to take matters into my own hands and hooked myself up with a pair of handcrafted screw shoes :) I read over Matt Carpenter's Screw Shoe article to make sure I got it right the first time. After lounging around inside most of the day on Saturday, watching the snow fall the entire day (and opting for a treadmill run rather than one outside...I know, I know), Geof and I marched over to the Ace Hardware near our apartment and bought a box of 3/8" sheet metal screws. I brought one of my Cascadias with just to make sure the screws weren't too short or too long. Oh, and I went with the hex head sheet metal screws (very important distinction!).

Back at home, I set about trying to figure out how I was going to get the screws in my shoes as we don't own a power drill. After watching me attempt a couple different things, Geof jumped in and took over. Phew :) Geof used a ratchet screwdriver and got them all in in no time. Much faster and easier than a regular screwdriver! 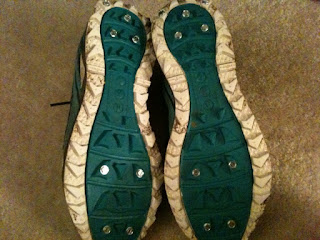 Now it was time to test them out. Sunday, we lazed around quite a bit, then finally got out the door around 2:00. It was still snowing! This would be the perfect weather to test out my shoes in. It was about a 1/2 mile (give or take) of exposed pavement the whole run so there wasn't a ton of beating on the nails. Once on the lakefront path, it was smooth sailin'! It hadn't been plowed yet, but there had been a good bit of traffic, so the snow was matted down pretty well. But it was just enough that my screw shoes came in handy, especially on the icey, snow covered curves going around the Planetarium and Shedd Aquarium. Handy little suckers!

We did a few loops around a snow covered Northerly Island, and really enjoyed the scenery, especially since we both finally warmed up and were feeling good. We discovered that the Chicago Park District is set up in the old Meigs Field airport building (which is what Northerly Island once was) and they rent out snowshoes and cross country skis apparently. Lots of cool old photos hung on the walls showing original city plans and photos of how it once looked in the area. Now it's fuzzy, but I think we did four laps around the Island, but definitely three. I felt much more confident with my screw shoes and didn't do nearly as much over-compensation, anticipating slick areas. What a difference that makes!

All told, we ended up with our planned 2 hours running, and a little over 11 miles. I felt really good most of the time, and only had a single twinge on each ankle the entire time. I'm not complaining :) I think I'll give that laser therapy another try this week if I can get in to see Dr. Heddles at Active Body Chiropractic again.
If you're contemplating the screw shoes, I highly recommend giving them a try. I'm sure most of you have a pair of old running shoes laying around the house :) It's a cheap way to feel a little safer out there during your icy wintery runs. Plus, it's easy to do!
Crash, out.
Posted by Paige at 10:47 AM

I love my screw shoe too. Way cheaper than Kahtoolas and work better if you have to run some stretches of pavement.

See you at Voyageur - I may be the race director, if no one else takes over!