Windburn Six in the Stix , and BIG News!

Yesterday was the first running of Windburn Six in the Stix, the winter "fat ass" version of Sunburn Six in the Stix. It's a 6 hour free event run on a 2.28 mile crushed gravel loop at the James Pate "Phillips" State Park, in Bartlett, IL. The CHUGs' very own Brian Gaines once again took the reigns and got it all set up and on Saturday, January 9, about 20-25 very brave souls showed up to toe the line. While I'm not sure on the exact number, it was definitely far less than the 49 people who signed up. Not that I can blame them...it was downright COLD! By the time we started, around 8:15 a.m., the temperature was 0 degrees. By the end of the run, it had risen to a whooping 15 degrees. Thank goodness the sun was out all day, it was the only saving grace! 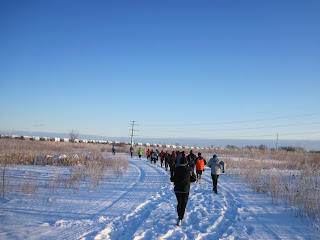 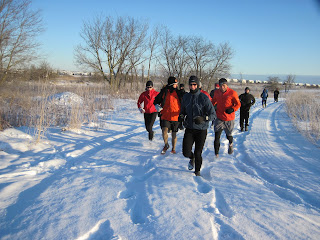 Front of the pack, but not for long :) 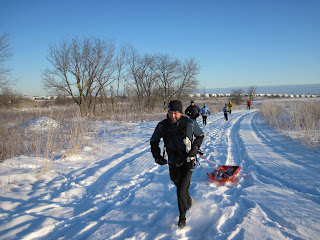 This is Jim O. He used Windburn as another training run for the Arrowhead 135 in February (hence the sled). Good luck, Jim!!!

The park is pretty underused, but very well kept. Due to the lack of use, the trails were almost entirely untouched. This meant postholing through foot deep powder much of the first loop. Good thing I decided to wear my waterproof Sugoi Resistor socks :) Since it was so flippin' cold, the snow never really packed down enough to create a good running surface, so that meant a LOT of ankle rolling, twisting and general debauchery was in store for the runners. Some portions of the trail packed down, but it never lasted long. So basically, the trail was perfect for snowshoeing!

Geof and I went into the day looking to just keep moving the full six hours. We didn't really have a mileage goal in mind as we knew what the weather held for us. And, at this point, six hours on our feet was going to be a very good thing :) I was not looking forward to running that long in such cold temps, but needed to do it for myself. It surprises me every time I run in the cold (which is quite often now) that as long as you wear the right clothing you will be just fine. I invested in a good pair of fleece lined Pearl Izumi running tights and some Powerstretch zip tops this winter and I've already used them enough to justify the cost of the items! It's amazing how much of a difference it makes wearing the right stuff, and layering. I've also taken to wearing my tricked out ski mittens...wind and waterproof mittens that have a cozy fleece liner glove inside. I wore those babies all day yesterday, and my hands were sweaty! Geof and I overpacked big time (I threw almost my entire winter running wardrobe into a suitcase!), but we never made a single clothing change! Clearly, we picked the right clothes from the start and I'm really happy with how things turned out. I never even changed my socks, and I love changing my socks :) 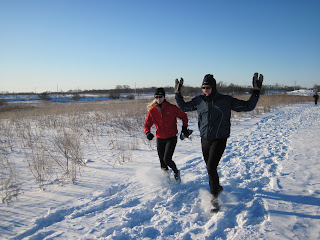 So, as for the run, I was a little worried about how my ankles would hold up given their current tendinitis diagnosis that I've been getting some PT for (and clearly yielding significant results), and given how bad the footing was going to be. But, in the end, my ankles did a dazzling job out there and held up brilliantly! I felt one single twinge in the first minute or so, but I quickly found my groove and it stayed that way the rest of the run. I could not believe how good I felt! Geof and I ran together, more or less, the whole time, and just ticked off the miles. The hours went really fast and I was really enjoying myself. It wasn't until about the second to last loop that I started to feel a little tired and felt it in my hips and glutes. 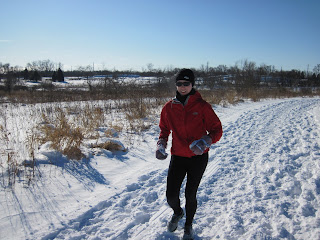 Almost done :)
5 hours and 43 minutes later, we came to the start/finish area with 9 full laps done, which is 20.4 miles. Hello! All things considered, the effort and time on our feet far exceeded the distance we covered, and the final mileage count far exceeded my expectations. Bam!! What a day. I should mention that my appetite was very different than the usual in the cold weather. I did not run with a bottle since the laps were short (around 30-40 minutes each), and took some swigs of Perpetuem and ate a gel after each lap. Brandon from Indiana brought homemade chicken noodle soup in a giant jug so I partook in that, Brian handed me a sausage McMuffin around 11 a.m., and I was enjoying some hot coffee after each loop. This was enough to keep me going the whole time. It was so much fun to hang out with my fellow CHUGs and cover some miles. While the vast majority of the field left quite a bit before the six hours were up, those who stuck around and just gutted it out seemed to have a pretty good time. It was just too dang cold to hang around if you weren't running! Afterward, a group of us headed over to Nest Cafe, in Bartlett, to enjoy some hot food and rehash the day.

Geof and I were using the run to determine whether or not we would run Rocky Raccoon 100 in February. After a little more discussion later on over some pasta and garlic bread at Brian and Kelly's house (Brian is running RR100, too), we ended up signing up for RR100!! Watch out! Geof and I will be running the race together, and I am so excited about it! We've got a little (!) more training to squeeze in for the February 6th race, and lots o' planning to do, but it is just going to be so much fun. We'll be sharing the experience with Brian and Kelly, of course, as well as a number of other CHUGs making the journey down for the race. Can't. Wait!

Amazing, Paige! Susan and I ran 4 hours in that cold yesterday and we were toast. Cannot imagine 6. Running on snow makes my ankle tendons happy, too. Weird, huh?

I'm so glad you were able to be out there for the whole 6 hours and have a solid run! RR100 is gonna be a blast. :-) Thanks again for being our guests -- such a great weekend!

6 hours running in those conditions?! You two just rocked, or "Crashed" my world with this posting.

Pam, it's totally weird how that makes ankles happier! I don't get it, and I'm going to quiz my PT on it tomorrow. Hopefully that kind of footing is making our ankles stronger!

Kelly, thanks for having us!

Slomo, hopefully I didn't make it sound easy, 'cuz it wasn't! That was downright tough running in that stuff! But fun :) I much prefer ideal weather, lol.

Hi Paige,
I just found your blog after Slomo's (He is such a nice guy...love him to peices:) little bleep about your amazing 6 hour run and had to take a look! Wow! I can only imagine how hard it was running in that snow...my feet would be frozen after about 1 hour! Good job....I am impressed:)

Juli, you would be amazed by the awesomeness of waterproof socks. They are lifesavers! Thanks for reading!