KM100: A Study in the Art of Attrition

This is going to be a little different than just a typical crew's point of view.   It's more of an observation of the whole experience from the other side and how it felt to be there. 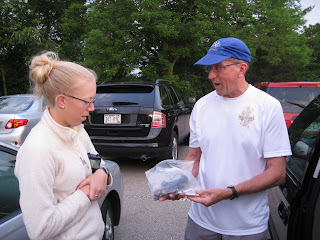 Getting the down low on Ed's nutrition and supplies
This past weekend's running of the Kettle Moraine 100 up in Wisconsin was an experience that few, if any, of us anticipated. Running ultras requires one to be prepared to expect the unexpected, ready to deal with a complete change in circumstances at the drop of a hat. Or, end their race.

This weekend, I was an outsider looking in, observing the mental and emotional slaughtering of dozens upon dozens upon dozens of runners. This year's race (a true "runners' race") produced a 33% finishing rate. Only 51 out of the 155 starters in the 100 mile run actually finished. Whoa, what is this, Leadville?!

The day started out benign enough. Warm (mid 60s I think), humid, no wind, and a little bit of sun, but mostly thinly overcast. Rain, however, was in the cards, but it was unclear when that would begin. Chatter about the 2008 KM100 fluttered about each aid station..."Remember 2008? That was horrible." "2008 was the worst year ever here." "You couldn't pay me to relive this race in '08!" Apparently, this year rivaled 2008 for "Worst."

Ed was running well ahead of his 25 hour plan, 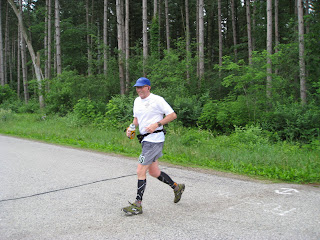 Ed coming into Bluff Rd.
Leslie was all smiles and a ball of enthusiasm on the trail, 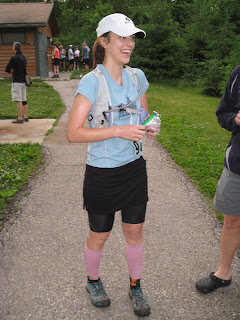 Les, just before the Start, all nerves and smiles!
Michael was moving like a freight train with his eyes steady on the prize. 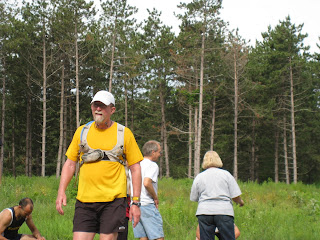 Michael, coming into Emma Carlin AS for the first time
It's so weird to look back and see how good it was, now knowing how it was going to turn out.

The day was great for those of us crewing.  We hung with Bill (supporting Leslie) and then Ben, Sarah and Brian showed up, so we had a whole CHUG contingent supporting our guys and gal out there.  I know how much it means to have people out there cheering you on, helping you out, and there is nowhere else I'd have rather been.  Ed and Michael are hundred mile veterans many times over, but this was Leslie's first go of it.  I wasn't really sure what to expect from her, but I knew she had a tough-as-nails streak in her.  Watching her come into aid station after aid station, smiling and exclaiming, "I am having so much FUN!" was so inspiring.  She was trucking along, doing very well, moving conservatively and keeping her head about her.  I found myself feeling a bit maternal more than a few times for some reason (and we're the same age!).  It was so freakin' cool to be witnessing her mission and knowing exactly what she was going through much of the time.

In the end, Ed decided to drop at 100k for medical reasons far beyond his control.  It was a tough decision for him and one he really hated having to make, but if he continued, it would have been too risky.  Proud of you, Ed, you did the right thing!  What a fun guy to crew for.  Geof kept on him about finishing a bottle of his Perpetuem every 4 hours, borderline nagging, but all in good fun and for good reason.  Once he finally made it through a bottle, he came into the aid station, tossed the empty bottle to Geof and announced, "F**# you, I finished it!"  All smiles.  Classic Ed, and totally hilarious.

Michael was out with the goal of simply finishing.  He had some DNFs he wanted to forget about, and KM was his mission.  Brian drove up to pace him the last 38 miles.  Seeing him cross the finish line, we knew it was no easy task, but he did it!  He had tried to drop a few times out on the course, but Brian made a really smart move, he put the decision entirely on Michael's shoulders.  "Do what you want.  It's your decision, not mine."  Apparently, this was enough to keep him moving, for better or for worse.  Michael was our sole CHUG finisher this day from what I can tell.  After Ed dropped, Geof and I stuck around and helped support Leslie, and then hung at the finish once she dropped so that we could cheer in Michael and the last of the runners.  I'm SO glad we stayed.

Leslie pushed and pushed through some nasty conditions and some seriously mentally and emotionally challenging sections.  Unbelievable to watch her do this.  She was pushing to get out of aid stations, she didn't need any of us to remind her to get moving.  In and out of those so fast, impressive!  Towards the final 20 miles, she was concerned about cutoffs and inquired about them each time.  But we held steady for her and kept her assured she was fine.  After making it 86 miles, she decided it was enough, it just wasn't her day.  It was a tough decision for her and it was written all over her face how hard that was to do; I was a little choked up because I was so set on her finishing, but I also knew she was doing the right thing for her.  While she was disappointed with her decision, she was already talking about coming back next year for her revenge.  That's the spirit!!

Runners were dropping as early as 21 miles, but the bulk of it happened at the 100k mark (Nordic) where the draw of getting a 100k credit for the day was far more appealing to the majority of the 100 mile runners than was heading back out into the dark forest and heavy downpour. I overhead one guy exclaim, "not even God could convince me to go back out there!"

It was sad, humbling, sobering, eye opening...to watch the breakdown of so many runners, tired of the blinding rain, and subsequent cold front that moved through the southern Kettle Moraine. But for those that pushed through the tough conditions and kept at it, the reward of finishing was far greater than I think they ever anticipated it being.  We observed boatloads of drops, asking a volunteer where they could turn in their chip, "At Nordic," then asking how to get back there quickly, and then watching as they walked off, up the road, heads dropped, shoulders sunk, but moving as if they hadn't been running over 10, 15, 20 hours.  If only some held out until the rain let up, it would have been a great race for many more, but there was no way of knowing when the rain would end.  I was just an outsider looking in, watching as the attrition rate rose higher and higher.  I'm not sure how I would have handled the day, but seeing how so many others did I was reminded yet again of just how incredibly mental running 100 miles is...your mind needs to be just as sharp and strong as your legs and lungs.  Not to mention all the other things that can go wrong when you spend 5, 6, 7 hours running in the rain and mud puddles.

As Geof and I stood at the finishline waiting for the final runners to come in, I looked around us and thought...almost 30 hours ago 155 runners stood right here with high hopes, huge smiles, butterflies, and dreams of running 100 miles. They had no idea what the day would hold for them, but they were all here to run, expecting to finish. 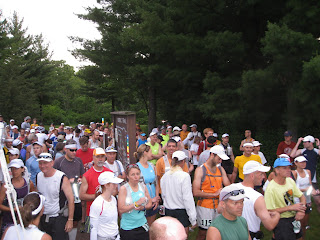 Bright-eyed and bushy-tailed runners at the start!
The last of the runners trickled in, oozing with emotion and exhaustion.

The last woman to cross the line of her first 100M run brought everyone to tears as her pacer threw up the runner's arm in victory across the line (I'm getting goose bumps remembering it!) and she broke down in her husband's arms, completely overcome. Even Timo, the RD, couldn't hold back the rush of emotions we all felt for her. It was incredible, and a testament to the enormity of the accomplishment.  Geof overhead Timo say that he really actually enjoyed the outcome in some small way...it gave others the chance to win or place in their age group when they normally would not have.  He was so proud of everyone who finished that day, and it was supremely inspiring.

What an amazing experience, and I wasn't even the runner this time! This is one for the books and an experience that has renewed my enjoyment and love of our sport (not that I needed it). Even for those that pushed through the terrible weather to keep running into the starry, rain-free night but didn't make it to the finish, I salute them. They kept going when so many others did not and suffered through until there was nothing left to give. Absolutely amazing, and this whole experience makes me really proud to be apart of it all.

Aww geez, you got me all teared up. I love that fighting spirit! What an interesting (and inspiring) thing to experience from the crew/spectator point of view. The only 100 mile finish I've ever been at is my own, and I didn't stay long, so I've never really seen what others go through. I'm working the finish line at Western Stated this year and I am really looking forward to it.

Great job on being the support, Paige!

I get CHILLS thinking about the experience of the WS finish line! You are going to be blown away I bet, and in a really good and inspiring way. I love hundos, both running and watching :)

Great and inspiring. Thanks.