The month isn't even halfway through yet and I'm already wondering where it went!  It's a busy one.  I always feel better about my stuff when I've written things down and I can see them in front of me, rather than volleying everything around in my head, trying to make sense of it.  We have one weekend at home this month.  And that's a lot... 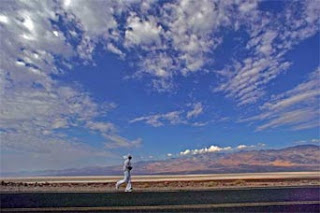 Photo Credit: Los Angeles Times
Badwater (holy eff!) is next week (and dominating two full weekends)!  Geof and I are crewing along with Jim O'Brien, Ed Kelly and Terry Madl for our guy Adrian Belitu.  This will be his second running of BW (last year he finished in 33 hours and some change), and this year he's got a faster goal in mind :)  Looking forward to being a part of the mayhem.  I'm also looking forward to doing a couple of training runs in the heat the weekend before the start of the race (Monday, July 12 @ 10a.m., for Adrian).

I'm not quite sure what to expect out of the Badwater experience, but I do know I plan on taking many a picture and soaking it all in (in spf 75+). I have no plans of attempting the Mt. Whitney summit (14,505') afterwards, but I will look forward to the stories that will surely follow from the others! I decided that, should the summit be a reality for Adrian, I don't want to be the one who puts a wrench in his plan by having my stomach or head explode at altitude, or get eaten by a mountain lion (or whatever awesomeness they have out there). That would suck. Plus, everyone else planning to summit are far fitter than I and I don't want to get left alone in the dust, on a mountain, being circled by vicious man-eating beasts, without water. That would really suck!

As soon as we return from the left coast, we have our final big training run: Minnesota Voyageur 50.  I keep forgetting about this race!  If all continues to go well, I still plan on running this one, but I'll decide that race morning :)  Geof and I plan to run it together.  Since I haven't raced since February, I'm already getting nervous about it.  Last year I raced so much that I never really had the chance to get too jittery...I'm officially jittery!

You may well know that Wilderness Running Company is my favorite running retailer due to their very high level of awesome.  In January, they published a write-up I did about Acadia National Park.  And, THIS month, they decided to give me another go and published a write-up I did about Trail Running in Chicago,  That was fun!  I hope it's helpful for readers looking to get out-of-doors in the big bad city :)

Reading about Leadville is making my head spin.  I need to stop.  I already know what I'm doing and have an idea how I want to do it.  Anything anyone else is doing is erroneous when it comes to my race, and I need to keep reminding myself of that.  Not a lot of time stands between me and that finish line...WOW!

I got some 6 mile runs in this past weekend, and today, and all felt good.  I'm going to hit up my PT, Brendan, for a screening though just to make sure all really is okay, and so I can get some better strengthening and stretching routines to incorporate.

I suppose that about does it for now.  Today totally feels like a Monday, and the fact that it's really Tuesday makes me downright giddy :)

Oh I know exactly what mean about getting it all written down instead of having everything bouncing around in the brain! That's exactly where I am, too. It's just so cluttered up there! :) But things look to stay busy, which is good, but ack ... must find time to write!!
Have fun at Badwater! That is going to be one awesome experience. How are you getting there? I have no clue of the closest airport, but if you happen to be flying through Reno, let me know. We'll meet up for coffee, or a run, or something!

Oh, I wish we were going to be near Reno, that would be awesome! We are flying into Vegas and driving a few hours west to Furnace Creek, CA, so that's quite a bit out of the way I s'pose!

I need a broom to sweep out some of this clutter; this post was more of a half-assed dusting with an old sock! Planning for a big race takes up a lot of room, lol!

Can't wait to hear the Badwater updates. What an amazing race to be a part of.

Voyageur always tends to be a hot race, so good training for Badwater. Hope to see you there (though I'm only spectating this year).

Hope things are going well for the team in the Valley so far!