Windburn Six in the Stix: A Six Hour Tour 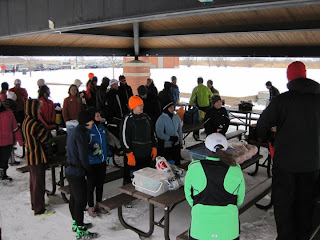 Brian (RD) giving a quick speech before we get started
This past Saturday, 61 CHUGs gathered at the James 'Pate' Phillip State Park in Bartlett, Illinois for the second annual Windburn Six in the Stix.  Yep, six hours of running in circles, in the dead of winter.  Sounds awesome, right?  My write-up from last year is HERE and gives a quick rundown of the park.  Now, just replace the weather description with this one: cloudy as a mother, light winds, high around 28.  Perfect Windburn Six weather if you ask me!  The warmer temperature meant that the foot or so of snow that awaited us on the trail would eventually pack down and make for pretty ideal running.
Geof and I decided to run this one together again this year, and use it as our usual Saturday long run.  Geof wanted to get in 30 miles, and I was aiming to beat my distance from last year (20.58 miles) and shoot for 22-25 miles.  I found out a couple weeks prior to the run that I was the female 'course record holder' with my 2010 performance.  LOL.  Well, how often do I get to hear that?!  I'll take it!  I had no idea, so that added a little bit more fun to the mix for me. 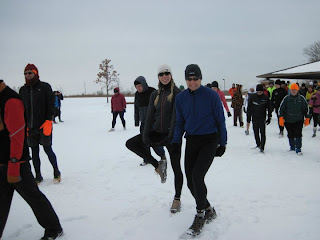 Geof and I goofing off at the start (ah, this picture cracks me up!)
We gathered at the start 'line' before Brian ushered us on.  The footing pretty much blew for the first three hours, but after that it was pretty good, as far as snow running goes.  Once everyone started running in the spot on the trail, it really packed down nicely.  But until then, it was like running in deep sand.  However, the weather was awesome!  I was good in one pair of tights, my long wool ski socks, my favorite Icebreaker top underneath a power stretch fleece top, hat, glove liners, mittens.  When we got to the really windy spots on the course, I'd put my mittens on, then remove them once we got through the wind tunnel.  There was a pretty good glare off the snow, so I kept my sunglasses on the whole time.  I started out in my newly modified Sporty Cats (I cut the heal counters down a half inch so that it stopped rubbing my achilles tendons), but after an hour or so I had to switch out of them and into my old school Cascadias that I've had for a gazillion years (really more like two years).  My Sporty Cats are a size too big now that I don't wear orthotics anymore so my foot was sliding around big time and giving me a buffet of hot spots.  I may have to ditch them and get a size down in the Cats, I can't run without them! 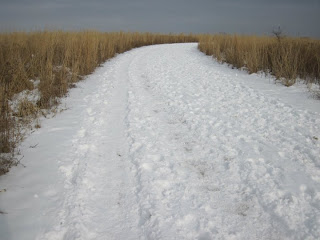 The trail, after it got packed down (on the left)...mmmm, runnable!
All things considered, the run was going really well.  Jen Aradi, Sarah J. and I kept pretty close for the first half or so of the race, then Jen began inching up and got out of reach.  She's a super strong runner and just doesn't stop.  That's the way to do it; just keep moving!  She did great!  Sarah is coming back from injury, but on any normal day she would have smoked all of us.  Sarah, you did awesome and I'm hoping that ankle fully heals soon!
I was enjoying myself and loving running another race with my guy.  It was tough going though as the footing was pretty rough for me at first.  I kept kicking my right ankle (creating a nice bruise and swollen ankle afterward) and my left leg was really p-o'd.  I could feel every muscle locking up my left leg, but I kept on going.  Eventually it all shook out and things were feeling good.  We had six hours to get through, no more, no less.  So that's what we did. 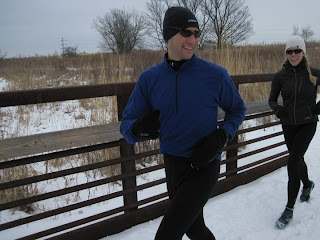 Geof and I running across the bridge to the start/finish pavilion
I was noshing on my favorite chews ever, Honeystinger, and we also chowed down with a cooler of water, some hot ramen in a thermos, coffee in another thermos, and soup that Brian cooked up for the group.  That ramen was awesome and I had more of that than anything else.  It was fun to test out something different and see how it settled in the ol' tummy.
We would stop at the start/finish pavilion every two laps and grab something to eat.  I changed my soaked socks once, and change my shoes once.  Otherwise, we kept it short.  Though it was slow going on the trail, we were still making great time, and surpassed our 2010 Windburn mileage by the fourth hour, so that was cool.  After finishing up a little more than 25 miles, I thought I was done.  So Geof headed out to get his last five miles.  I went up to the pavilion and got a cup of soup, then decided I could walk a few more of the short loops since I still had 20 or so minutes left.  Why not? 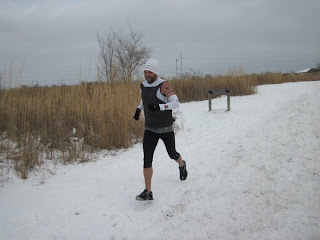 The overall winner, Jim O'Brien.  And, yes, he was dressed like that all day.  He got over 40 miles in.  Awesome.
So, when it was all said and done, I finished up my day with 28.86 miles, good enough for second female overall; can I getta wha wha!  Geof got a little more than 30.  Bam!  That's a lot more than I had intended and certainly more than I thought I had in me that day.  It was great to feel that post-ultra muscle fatigue and soreness again.  And, it was awesome to spend a large chunk of a day running once again.  I felt like I pushed myself a fair amount, and in relatively challenging conditions.  Deep snow running kind of...sucks...but it was a great lower leg workout, no doubt!  I found myself longing for a flat, fast surface that I could open up on, but there was none of that on this day.  It was a great exercise in adjusting to the conditions and running within my abilities.  Clearly, I need to get back on some technical trails and regain my footing there :)  My ankles have been spoiled on the easy pavement this winter! 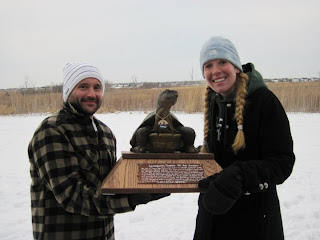 Jim (1st overall) and Jen (1st chick) hoisting 'James', the CHUG Fat Ass Series trophy (there's a story behind the turtle...it's native to the forest preserve we run the Windburn and Sunburn races at)
For my efforts, I got a little token to remember the day by: 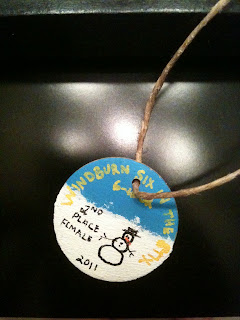 I love it!  Brian made these awards by hand and did a really awesome job.  Thanks Brian!
We had a great time and I'm really looking forward to the Sunburn 6/12 in the Stix on July 9th in the same preserve.  I've never done a 12 hour timed event, so this will be a great first shot at it.
Now, it's time to kick back and enjoy this massive blizzard we're getting, and the snow day tomorrow.  Woohoo, school's out! :)
Crash, out.
Posted by Paige at 6:18 PM

Awesome day running - at least running in circles on the snow!!! That constant slippage gets to your legs after a bit, don't you think? Amazing job by both of you - congratulations. Stay warm - this is one big fatty of a storm that's hitting everyone this week!!

Sounds like a wonderful day, Paige! Love them Honey Stingers!! I'm impressed that you ran so far in loose snow. That's tough stuff!
I have never run a timed event. I like the idea of it.
Enjoy the blizzard.....