Honest to goodness, we had no intention of doing anything even remotely surprising during Saturday's race, the Des Plaines River Trail Races 50 Mile.  Good friends, and co-crew members at Badwater 2010, Ed Kelly and Terry Madl race direct this little shindig, in its second year now, and we were psyched to see the guys and to get in one final extra long training run before the JJ100 taper began.  Once the final price break deadline came and went, we went back and forth about whether or not we run it, or volunteer.  When push came to shove, we decided it would be a most excellent day on the trails and the best way to get a reading on how our training has come along.

Turns out our training has gone better than we thought (oooo, foreshadowing!).

The race starts in Lincolnshire, IL with a short little out-and-back (~2 miles) heading south, then heads north along the Des Plaines River Trail into Gurnee, IL turns around and finishes where we started.  Geof and I had only ever been on the trail once before, in Libertyville (a section we did end up running through during the race), and it was on the coldest, most depressing-looking day in Illinois history.  Easily.  And the trail was covered in ice and wintery crap.  So we didn't have a good feel for what the trail would be like or how it would look.

Turns out the DPRT is a gleaming little gem of a trail!

The race started at 7:00 a.m., just as the sun was making its first appearance.  The ground was covered in a blanket of frost and our shoes squeaked as we shuffled across a grassy area to the starting line.  Brrr, it was friggin' cold!  But that wouldn't last long. 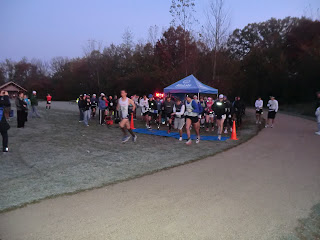 Apparently, my calculations had been off...we weren't just going to go sub-8:30...we were going to go sub-8:00 even if we walked the rest of it!  Buy why walk when you can run :)
I started to feel really excited, and Geof was feeling the pull as well.  We passed the "1 mile to go" sign and we picked it up to kick it in strong, crossing the finish line in 7h:43m:47s, in 8th and 9th place overall.  I snagged 2nd woman overall, and Geof was 7th male overall.  Hot Damn! 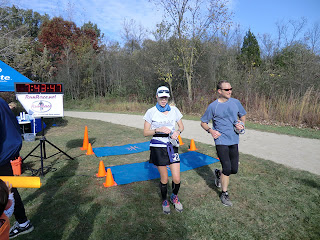 Crossing the finishline...totally bamboozled!  Photo: Bill Thom
We pretty much sandbagged ourselves.  Where did that come from?  We didn't even really work for it, we just ran nice and easy.  Bill Thom, of RunRace.net, congratulated us on our run and marveled at our finish time.  "Yea, but it's a flat course..." to which Bill replied, "Yes, but you still covered the distance; 50 miles is 50 miles!"  Hmmm, good point.  I find myself often defaulting to that thought when considering courses and finish times.  Why?  I don't know, but I do know I need to change my thought process on that because it's totally lame :)  It's pretty awesome to know that I can more or less run 50 miles, and run it well.  That gives me a lot of confidence going into JJ100, which is now two and a half weeks away, holy smokes!
We were both pretty sore the next day in spots we aren't usually sore due to how much more running we did.  By Tuesday we felt pretty fresh again, but I held off until this morning to go for a run.  I was pleasantly surprised by how good everything felt today.  Except for one pesky little shit of a blister on my left big toe.  Nothing a little lambs wool wrapped around it can't fix :)
Picking up the September issue of Ultrarunning magazine on Monday evening, I read Tia's editorial for the first time in awhile, and boy was it timely.  The topic focused on how different ultrarunning has become and how we automatically default to thinking harder courses are the "real" ultras and easier courses...don't count.  She wondered why being able to RUN a fast time on what is considered an "easy" course is somehow less of an achievement than hiking/running a slower time on a "tough" course.  Ultrarunning is all about being able to RUN long distances was pretty much what I took away from her short write-up.  I was a little surprised by just how timely reading that article was, especially since we've had that issue since August and I'm just now getting around to reading it :)
So that was a pretty awesome experience, and one heck of a 50 mile PR for both of us...again. What a year! I was extremely content to let our 8:35 PR stand for a good long while. I had no illusions whatsoever of getting a PR on this day. It just sort of...happened. So, I'll let that 7:43 stand for a good long while :) 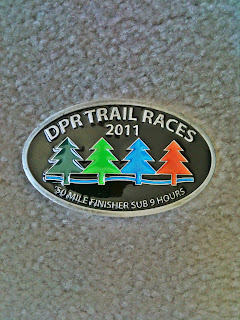 Sub-9 hour finisher's buckle
I'm super stoked for how everything went, and how even-keeled my mood and stomach were.  I am now really, really looking forward to JJ100, and really, really happy with our training this time around.  What a difference a training plan makes!!

Wow, great job on the race. Sounds like a perfect day. You're going to kill Javelina.

Way to go Paige and Geoff! Paige, I have to tell you I just love reading your blog. You really inspire me. - Holly Bochantin

Nice work! It sounds like the first place woman was drafting, which isn't really a big deal given how relatively ineffective it is running.

I think different races play to different peoples' strengths. Since you live in Illinois you're going to struggle with a tough mountain course while someone who is used to only single track in the mountains might struggle with flat road. Though I run mountain single track a lot I suck at those races and prefer (because I do so much better) flat, like Slickrock or (hilly) road like Le Grizz.

@Dax, thanks dude! It was a maaaaaarvelous day!

@Holly, you are very sweet! Thank you so much for reading :)

@Danni, ah, drafting. I've never heard of it when it comes to running. How weird :) I definitely agree about different races playing to different strengths. I just didn't realize flat was my strength, lol. I'll take it!

Hot Damn, indeed! Wow, congrats on such a great race. So nice when it works out like that, and very cool that you were able to do it together. Good luck @ JJ!

You two are really clicking those miles off - great job! Training seems to be percolating nicely for your big race. Have a fantastic week!

You guys are on a roll! Very happy to be along for the ride in your lead-up to JJ. Really inspiring stuff, and a super fun read as usual, Paige.

@Stacy, thanks dude! Sooooo, are you going to be at JJ pacing? I recall you mentioning the possibility. That would rawk!

Paige! Nice one! Don't go getting the big head and all. :)

Ha! Thanks @D-Ray :) Don't need to worry about that happening. My head is already physically pretty large. My shoulders wouldn't be able to handle an ego, too, LOL. Plus, I always have tough long runs on the Lakefront path to keep me humble!

Paige, how incredible you two are doing... and you make it sound so easy! Great job out there, and yeah, even if it's flat, you still have to work and be fit enough to hold that pace. Sounds like you are definitely fit enough :)
Awesome job!!! And yes, inspiring! By the way, "But this chick decides she's gotta have some Dunmore" - best line ever :)