I seem to recall that after the last time I ran this race, I would definitely not run it again.  Once was enough.  Done.  Next!

Then September 2012 rolled around and registration for the 2013 race opened.

"Well it's pretty much a local race for us now, we may as well."  "It's Moab, how can you pass that up?"  "It's selling out fast, we should probably jump on it if we think we want to run."  And just like that, we were signed up.

Wyn in Seattle even jumped on it, hoping to make it his first ultra (but turned out a feisty calf wasn't going to allow the adventure just yet).  And that's all the extra push Rob needed to sign up and run his first ultra.

So much for not running it again.

December came and went, then the INSANELY BITTER COLD AND INVERTED month of January rolled around and we decided it was time to do some training for the February 16th race.  OH MY GOSH, IT WAS SO COLD AND NEVER SEEMED TO STOP SNOWING in January (e.g. three feet of snow in one 36-hour period, and that was just the first storm of the month).  But we got out and ran anyway.  Now I'm like, "Cold?  What cold?  Bring it 15 degrees, you ain't got nuthin' on 3 degrees with an inversion and snow!"

By the time race day rolled around, I felt pretty darn ready to hit the ground running in Moab.  At dinner the night before, at the Moab Brewery of course, I said I thought we could go under 6 hours.  Reasonable enough goal.  But I knew that no matter what we would be getting a course PR.  Last time we ran it in 6:48 and some change.  Cake.

This year's race upped the ante a touch and ended up re-opening registration a couple more times as the BLM allowed them to increase the field size.  Over 800 runners toed the line (55k runners and 33k runners) on one of the most beautiful days I've seen in a long time.  Sun was out, temps were promising mid-40s, zero clouds, and most of the snow/ice had melted off the slickrock.  Booya!

Rina dropped Rob, Geof and I off at the main parking area and we then walked the remaining 3/4 miles up the road to the trailhead/race start.  It was shaping up to be a perfect day.  Yes, perfect.  The race started exactly on time, and we were soon running up the initial incline passing by a whole lot of walkers and amblers.  That felt pretty good, especially because we walked that entire climb last time.  This was one of only a few spots still covered in snow.  Once we crested the mesa ridge, though, it was smooth sailing and snow free.  Awesome. 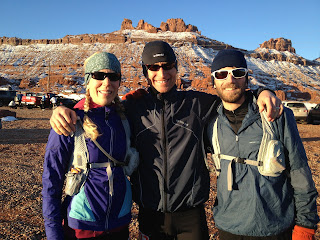 Matt Vukin snapped a quick shot for us before we walked up to the start area.  Sun, on our faces, so glorious!

Rob hung with us pretty much up to the halfway mark, at mile 17ish.  We stopped at the top of the mesa to get a quick picture/get oxygen :) 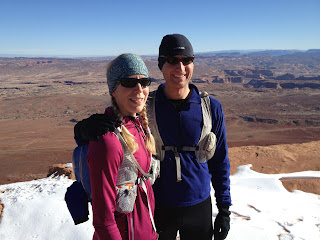 Honestly, the run went so completely uneventfully that I have so little to report, other than that my competitive streak showed it's face a little :) ...it was downright fantastic.

The views were stellar, the sun was so warm and inviting, and I loved not having to wear gloves!  I recalled two particular sections of the course that I was a touch nervous about...a big crevasse a la 127 hours, and an extremely steep rock face that you have to scramble up on all fours (and of course that was one of the only three spots with snow/ice on it this year).  Since we've been doing a ton of road running this year so far, I wasn't at all worried about the 17+ miles of slickrock running.  I was more worried about where to pee on the sparsely adorned red rock :)  The crevasse came up fast and I watched as others leapt across it with ease.  I got to the edge then froze.  Suddenly I was totally Aron Ralston, watching my life flash before me deep in a red rock slot.  There was a big boulder wedged into the slot just to the left and I opted to use that as a stepping stone instead of trying to leap.  Luckily, I didn't fall into the slot, wedging my arm between a rock...and a hard place.

Despite the more than doubled field size from the last time we ran this race, the aid stations were awesome.  They never ran out of water (like last time) and they were stocked with all sorts of good stuff, and gels.  I stuck to drinking Coke and eating gels and Reese's cups.  Yum.  Geof and Rob took advantage of the buffets, though, and for a change, I was waiting on them ;-)

Arriving at the top of Gold Bar Rim wasn't nearly as tough as I remembered it.  Actually, none of the race was.  So I took that as a good thing.  The slickrock definitely feels harder than pavement though.  When I could feel my teeth and eyeballs shaking with each step I decided this was fact.

I kept close watch on my watch and when the halfway point came and went I felt we were in fine form to finish up just under 6 hours.  Rob said he was going to pull back a little at that point, and we headed on up the trail.  He was doing great and in awesome spirits so we knew he was going to pull it off.  That was exciting!!

After what seemed like 47 years of running across a slickrock mesa, and running really well, we arrived at the mile 28 aid station.  When we looked at our watches we realized that 6 hours was not going to happen. 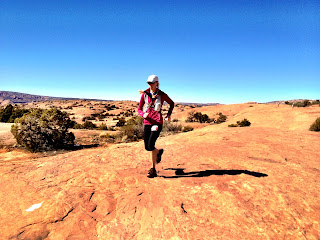 After leaving the 28 mile aid station.  The sky was crazy blue!

This is going to sound really silly and obnoxious, but I've sort of gotten used to meeting and exceeding my goals in running.  I always feel like I make very reasonable, and just a little bit out of reach, goals, so it's not like I sandbag myself.  And I felt this race was no different.  How on earth did we get so behind on time then?!  I felt a touch deflated.  BUT, we were still going to PR on the course.  Silver lining :)  I consciously picked up the pace and focused.  No more dilly dallying.  I had some beef with the course now.  I hadn't really focused at all until this point; I had been running very unfocused and just plain enjoying the day and what came.  Which is really great!  It felt like a good ol' training run rather than a race.  I haven't run a race in that mindset in quite awhile.  And once I focused, I realized what I could have done differently in order to reach my goal.  Lesson: learned.

Anywho, all was not lost, not even close.  We were having a supremely good day, in a mind-blowingly beautiful place...and there were three women up ahead on a flat, technical section.  I decided we were going to pass them.  That sounds bad, so bad, but it was a good goal and I wanted to redeem myself somehow.  We hadn't seen any of these runners all race, so that meant we made up a good deal of ground.  Boom!  I checked with Geof to make sure he was cool with picking up the pace and passing in the final two miles.  Done.  It was 6:09 on my watch.  Time to do a little work.

One, two, three, passed, and a couple guys.  I mentally apologized for passing each one of them so close to the end, but they were each so nice as we ran past them.  Now came the very technical (read: extremely rocky and unsafe) downhill switchbacks.  The very same switchbacks which taught me how to run technical downhills just two years prior.  Geof was ahead pulling me along.  I was now officially running out of control.  I actually felt like I was out-of-body in the final 3/4 miles.  I can't believe I didn't fall!  It was almost as if my feet barely touched the ground.  I was breathing heavy not because of effort but out of fear!  I could feel my eyes darting side to side looking for the next place to put my foot.  I don't think I heard anything but my breathing and my heartbeat.  It was intense!  Even just recalling it, and typing this out, my heart rate has spiked!

"Yeaaaa Chicagoooooo!"  Bryon P. was overhead, shouting down to us as we ran past.  As we rounded a corner I looked up to see who it was, "Don't look at me, look at the trail!" :)

Matt Vukin was at the final bend and snapped us running by, all smiles and totally stoked to be almost done! 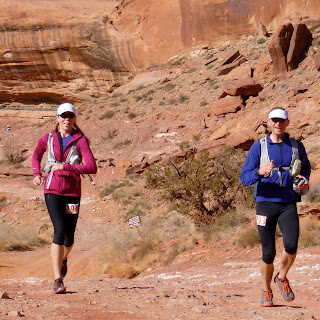 So that felt good to finish, and in the sun, and with a positively booming finish line party.  The place was bumpin'!  Music, food, vendors, runners, spectators.  It was a spectacle!  Around 3:30pm Rob rolled in as we crowded the finish line for him.  He looked great and was all smiles as well. 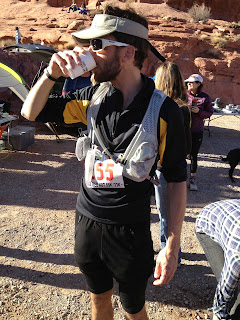 The day was warmer than expected, and Rob retrofitted his pants into shorts :)
Photo credit: Matt Vukin

We all hopped onto one of the shuttle buses back to the parking area and then headed back to the condos to clean up and begin the revelry.  Pizza, PBR, friends, my sweetie, and lots of great conversation and relaxation.  What more could a gal as for?!

And when in Moab, you go to Eklecticafe for a cubano and fuel in the morning.  This was my first experience at Eklecticafe, and certainly not my last!  Afterward, Geof and I, Rob, Rina, Lucy-girl, Wyn and Sarah headed to Arches for the requisite hike to Delicate Arch.  I LOVE THIS PLACE. 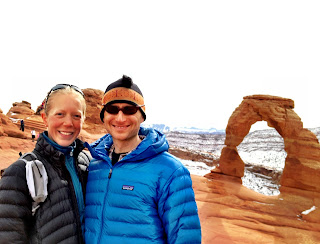 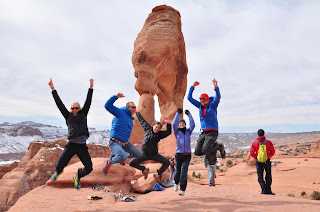 Who's sore?  Not us!  Who loves Moab?  We do!
Photo credit: Rob Corson

All in all, a fantastic trip down to Moab yet again.  It's a magical and wonderful place.  The race went completely without a hitch, our training was perfect for it, the weather could NOT have been better, the people were fantastic, the race organization exceeded my expectations, and I now know what to do next time in order to reach my goal: focus.  Yes, we will be going back for this one...I mean, c'mon, it's practically local for us now ;)  It's a great, tough, destination race for anyone looking for a short and sweet butt kicker, and in a great location.  Put it on your calendar.

Next up, Antelope Island 50 mile at the end of this month.  I don't yet have a specific time goal, mostly because I still haven't been to the island and I have no idea what to expect of the terrain, but I'll formulate something, most likely the night before the race :)

Awesome job, you two! That looks like a great race. I am definitely going to file this away as a possible future race. And I don't think you should feel bad about wanting to pass people - that's part of the fun sometimes! Every day is different, but some days pushing for a goal gives such an awesome feeling of accomplishment.

Great job, Paige! You are so lucky to live in such a beautiful place!