Today was frigging cold and windy.

But alas, I had things to do, places to go and miles to run! Today marked the beginning of my first coaching stint...I'm volunteering with USA/Chicago Fit as an assistant marathon coach. Pretty sweet, huh! I had to be at Montrose and the lake at 8:00 a.m. (literally one block from my old condo), so I set the alarm for 5:45 and hit the road at 6:30.

Holy crap, it was windy. I got downtown, one Poptart and a bottle of water later, and froze my ass off. I actually got there early, so I roasted a little in the car with the heater on full blast, then went out to the meeting spot once I saw peeps gathering. It was a small group today, but it's supposed to be larger next week. Jeff is the organizer and big cheese. We had to run 3 miles to determine what pace group each person will fit into, and that was pretty much it for the day. The Lakefront Path was packed, and I mean packed. Everyone and their mother was out there with a training group and none of them knew the first dang thing about path etiquette. Run on the right, pass on the left folks! There were also a bunch of kids out there for something, not sure what. But I am sure that they have never run in an organized setting before. They were all over the place, walking, running, sprinting, suddenly halting in the middle of the path directly in front of you, causing one to swerve and roll their ankle. But, I digress.

I think I'm going to like this whole coaching thing. It'll be a good challenge, and a great base-builder for my training :) So, after our little 3-mile skip down the path and a quick group chat, I hopped in the car and made my way back to my new favorite spot, 40 Acre Woods, in Palos Hills. What? You didn't think I was going to call it a day at 3 miles, did you? The wind died down and the sun was battling with the clouds to come out and play. It finally did and it felt great. The woods were beautiful today, even greener than last time. Not a whole lot of action on the trail, but I did run into a few bikers, hikers and couples out running. And a lot of horse shit. Literally. We share the trail with horses so there's evidence of them all over the place :)

The yellow loop is 8.something miles and I had originally only planned on 10 miles, but Chili Pepper Mike made me feel guilty for not having a long enough long run prior to Pineland Farms 50M in two weeks (and next weekend would be too late to do a long run), so I opted to do the loop twice and knock out 20 miles for the day. Why not! It was kinda tough, out there alone without any distractions...no iPod, no running partner, noone else to laugh at my jokes...but I did come across a deer (a doe?)...! 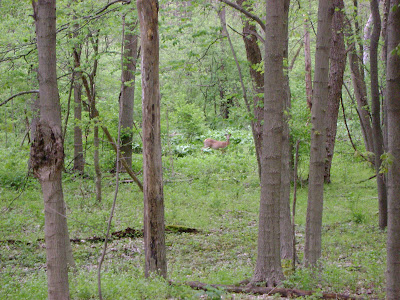 That was cool, I've only ever once seen some f'real wildlife on a trail run, so I had to take a picture of it. She just stood there and stared at me while I snapped pictures. What a ham. I wore my new road shoes so that I could test out the new orthotics on a run longer than 10 miles and they held up very well; no peronial problems, and no weird arch pain like I had last weekend during my 10-miler. Sweet. I introduced my road shoes to mud and splashed through some unavoidable mud pools and puddles. They liked it :) I also tried out a new gel. I always get raspberry flavored Hammer gels in race packets so I've accumulated quite the collection and figured I should make use of it. It wasn't bad; a nice break from the usual mocha gel or Clif Shot Blok. I think I'll use it more often! I took one Shot Blok before I started, and 4 or 5 chocolate covered espresso beans. This was a good idea and I felt good the whole first loop. Before heading out on the second loop, I refilled my handheld, grabbed more espresso beans and had some grapes, yum. I decided to take a page from someone else's book (it was either Christian or David!) and bring fresh fruit for between loops and after my run. Great idea!! My right shin chimmed in towards the very end and it was so out of nowhere, but I slowed to a walk for a bit to let it shimmy out. Then I took a picture of the single track I was not going to attempt since I was alone and fully capable of "crash"ing solo... 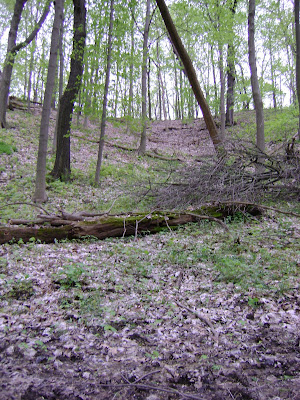 Once the sun peeped out things took on a brighter, more vibrant color... 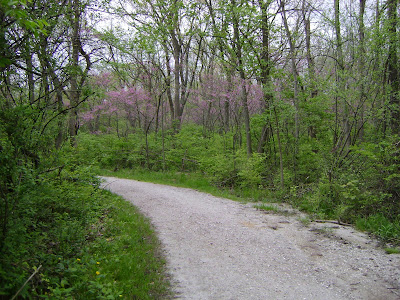 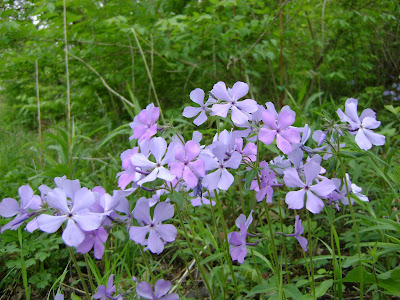 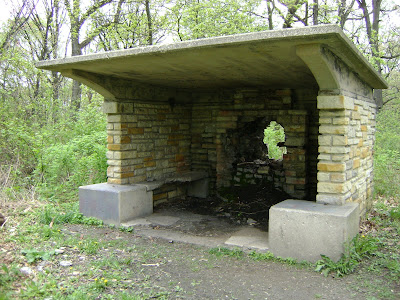 Some sort of fire pit/fireplace doodad. A great place to pop a squat for a second... 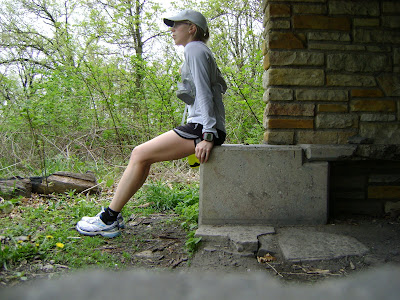 I was getting tired...scratch that, I was really tired and I could feel it in everything. My glutes were aching, my lower back was whispering sweet nothings to me, my abs afire...I was just plain exhausted from the week, and the early morning. But I kept moving forward. I made sure to incorporate plenty of walk breaks, and walked all of the big ass hills so that my legs wouldn't be completely trashed tomorrow. I found myself feeling rushed and anxious at several points during my run, and had to keep reminding myself that I could relax and that I didn't have anything else to do with the day but run and enjoy being outside on my own.

Coming around the toboggan slides, there's a little bit of limestone singletrack that brings you back into the canopy of trees and woodland. It made me think of Maine :) 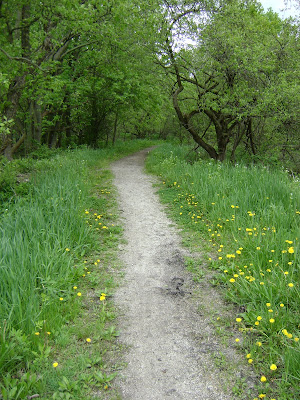 After Biatch Hill (my new name for the hill some of my CUR's referred to as Big Bertha) I knew I was close to being done, and a glance at the GPS concurred. It had been 3.5 hours (!), and a total of 20 miles. Oh praise the trail gods. That was awesome! It felt good to be done, and to have done it on my own. It's a big lift to do a big run like that without any help whatsoever. It's a solo long run PR :) At the car, I stretched, put on dry shoes and socks, ate my banana, grapes, chocolate milk and protein bar while I watched some people grooming their horses in the parking lot. Random.

A great day. I had some Chinese food with my mom and Richard for dinner. I ate A LOT, and way beyond being satiated :) I can't resist perfectly fried crab rangoon, I just can't.

A bunch of my CUR's ran the Ice Age Trail 50M today and I'm so happy for them all!! Lots of stellar finishes and I can't wait to hear all the stories from the trail. Mike had what I like to call a 'character building' experience at the Wapack 50M in Massachusetts. Trust me, his race report is going to be epic. All this 50-miler mumbo jumbo had me wishing I was partaking in one this weekend, but all in good time :) Pineland Farms is a measly two weeks away!!! I can't decide what I'm more excited about...Maine, another rockin' 50M, Camp Atayne, the ultra dome in all its glory, or more cowbell! 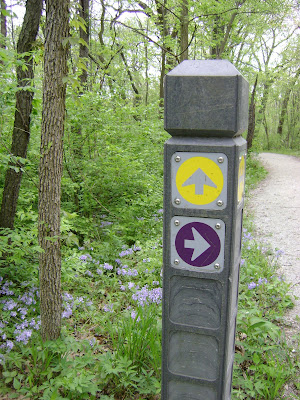 No jokes or sly remarks from me today. Way to go Paige! Loved the report, loved the pictures, and absolutely loved that you got this one last long run in before Pineland. My race report is for sure going to be epic - the hard part will be choosing a title fitting of this weekends ultra tomfoolery.

Thanks, David and Mike!

Wow, good for you on your Palos long run! Thanks for sharing the pictures -- it definitely looks greener out there, love this time of year.

Sounds like you will have a great time coaching, looking forward to hearing more stories along the way about that. It's fun to witness marathon newbies hit those "first" milestones.

Have a great time in Maine in a couple weeks!