Lawyers and Dinos and Bears, Oh My!

“We must go beyond textbooks, go out into the bypaths and untrodden depths of the wilderness and travel and explore and tell the world the glories of our journey.”
~ John Hope Franklin
I am a couple days behind on this one, but I have a very "Paige" excuse for it :)
Tuesday I decided to go for another lunchtime run, and since I had my camera with me for the Cinco de Mayo shindig I was going to at my friend Bob's house after work, I decided to bring it along with me during my lunch escapade down a southern portion of the lakefront path. Lots of fun stuff to see, especially when all the beasties are out of hiding on such a warm and beautiful day :) I dropped my stuff at the gym and then headed down Grand to Navy Pier... 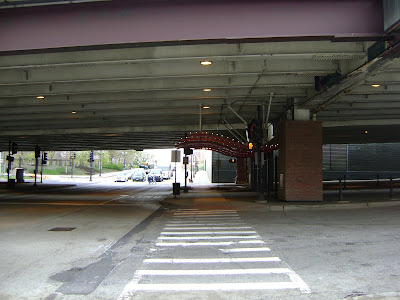 The squiggly decoration thingies hanging from the overpass are what tell you
that you're almost at Navy Pier :)
Then, from there I hopped onto the LP. Gorgeous. 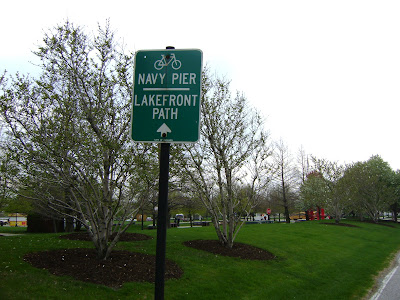 As expected, lots of touristy-types, and geese enjoying the splendor that is a random patch of green in this city... 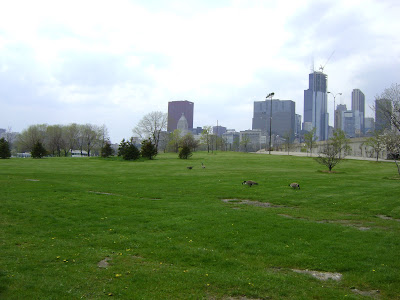 Then I saw ahead of me two dudes that look like lawyers in my building. First random scary sighting! At least they had very good running form, no biomechanical issues that I could see. Okay, that's weird, but nowadays for some reason I find myself watching a person's gait when running. I like to see if I can pinpoint any problems with footfall/biomechanics. Maybe I'm in the wrong profession...! 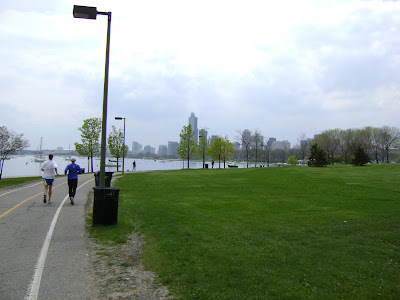 I like this portion of the path, and it's so rare that I head south of Navy Pier. It's a nice change of pace. I also loooove Buckingham Fountain... 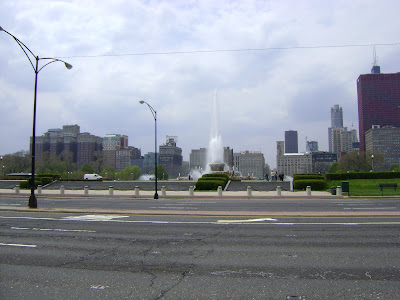 Literally, the only time there was a lull in traffic on Lake Shore Drive my entire run...and I didn't even plan this shot.

I was doing five miles, so that meant running through the Field Museum parking lot, where there was a dinosaur sighting, sneaky little boogers... 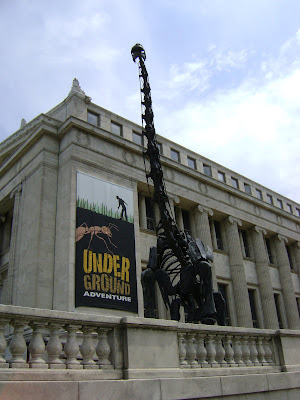 And then my turnaround was at McFetridge Drive...aka Soldier Field...a "Bears" sighting! 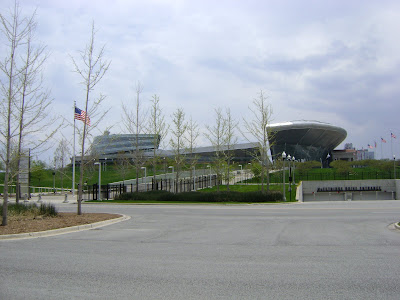 Once I turned around and headed back, I couldn't resist a shot of my favorite vantage point of the skyline...of course it's a little better when you're on Lake Shore Drive, and not in a parking lot... 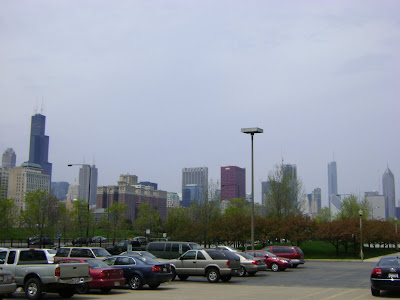 It was nice to discover that there is indeed a green patch in the city :) It was a good run, and I got pretty hot once the sun finally peeped out. But I kept my shirt on this time so that I could show off the Atayne on the southside :) My left extensor/shin muscle was doing that weird fatigue thing it does every now and then. Feels like it's incredibly...fatigued. Then I have to stop and rub it, stretch it, beg it to work properly. At exactly the turn around point it stopped bothering me. The LP isn't hilly per se, but when you enter the museum campus area there are a few and it was a welcome stretch. I'm starting to enjoy running hills, makes me feel more accomplished :) I was tempted to run up the Field Museum steps and pull a Rocky, but noticed my lunch hour was going to be more like a lunch (two) hour as it were, oops! I also then noticed that my camera wouldn't let me take anymore pictures...blast, I had forgotten the memory card in my laptop at home! So I only got eight shots, but at least they turned out okay.

Today I did another run-commute and made it to the train station super early, even after a leisurely stop at Caribou Coffee for a refreshing iced soy latte and some water. So I took the 6:36a train in for the first time, then ran to the gym so I could get in an hour of stretching and foam rolling before heading to the office. Five miles = done and done. Five more tonight on the way home. I like splitting my runs in two; makes the legs happy, and makes my metabolism shoot through the roof which means I'll have plenty of room for that cinnamon muffin my boss gave me this morning, and the two sammichs I brought for lunch (one turkey, one tuna). Yum.

Saturday begins a new adventure, and the makings of achieving another one of my 2009 goals: turning a short distance runner into a long distance runner...I'm going to help coach peeps to run a marathon. Yikes! Coach Paige at your service :)

Which building do you work in? I used to work in Leo Burnett bldg. Looks like a nice run. Sometimes I miss the path!

I'm kitty corner to that one I think...I'm in the old IBM building. Small world!

I like that section of the Bike Path, too. Though I'm a little annoyed that the piece around the museum campus is still shut down. The detour route isn't very clear, and though I've tried to find my way through it 3 or 4 times now, I still haven't succeeded. If only they didn't take forever to make those path repairs...

Not too long, now, til your Pineland Farms 50! You feeling ready?

Yea, I've been improvising on that section, running through parking lots and the grassy area outside Soldier Field. Confusing as all hell!

Am I ready for Pineland? Ready?! I was BORN ready!