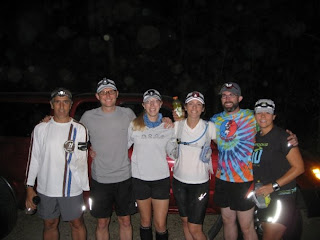 CHUGs: Tony, Geof, Me, Leslie, Bill and Kelly
How many runners does it take to run one loop in the southern Kettle Moraine, with maps? Well, a lot more than we had on this run! It was another super-awesome outing with some of my favorite peeps, my CHUGs :) This time we headed a little further north, to roundabouts Eagle, Wisconsin to pitch some tents at the Pinewoods Campground of the Kettle Moraine.

Geof volunteered us to do the planning for this trip, so I immediately rallied and reserved a couple camp sites that would be pup friendly, noise friendly, and have easy access to some trails. Lucky for us, the trailhead was right behind our tents, sweet!

I guess it would have helped to know what trailhead it was, though.

While a bunch of CHUGs hung back at camp (you know, to do the important stuff like keep the beer cool, fire warm, and tents safe and sound), six of us set out on one of the most confusing 5-mile loops of lush, delicious wooded trails. The plan was to follow the outermost 'green' trail (5-mile loop). How hard is it to follow the outside loop? Really freakin' hard when you're in Wisconsin! Every intersection became a cluster of madness, and a touch of frustration each time we realized we were running in circles, just not the right circles. Which way do we go? Does anyone see a green blaze? A blue blaze?! What? there's not even a blue trail on our map, what the eff is the blue blaze for? Are we going to die out here, Blair Witch style? Who farted? I want a hotdog!

So, you get the idea. It took us about an hour fifteen to finish the loop, and a few were turned off from doing a second. But not Leslie, Geof and I! We headed out for another loop, this time trying it in reverse to see if maybe we could trick the green trail into being marked correctly or something. Nope, still a clusterf***! Although we finished it considerably faster, we still got lost several times, and I spooked myself more than a few times. It's kinda scary out in those woods in the dark, lost, confused, hungry.

But in the end, we found our way back and quickly settled in around the fire to enjoy some hotdogs, hamburgers, and ice cold beer. Another fantastic CHUG outing. I love my CHUGs :)

On Tuesday, I had one of the most difficult and decidedly uncomfortable runs of recent memory. Geof and I headed out for 10 miles after work, and while the weather was just fine, my body was not. Everything felt funky. My stomach was totally empty and I was sooo hungry, but that hunger feeling quickly turned to nausea. I felt like crap, and my form was suffering. But I kept on despite it. I don't know what was going on, but my only guess was dehydration of sorts. I could not get enough water! Once we got home, we ordered a pizza from the Italian cafe across the street, and while I showered up I noticed I was not feeling any better. Nothing sounded appetizing and I felt blech. The smell of the pizza was horrendous, but I ate a piece knowing I needed to eat something, and it just looked so good! Wow, what a weird feeling, must have lasted a couple hours post-run, too.

Anywho, I had a great birthday morning run yesterday (followed by a totally awesome birthday!) and then a really good 6-miler this morning with Geof. It felt tons better and is very promising going into the weekend. Phew. It's a good thing cuz...

Did I mention I just had a birthday? Oh, yes, I did :) Yep, turned the big 2-8...huge milestone of a birthday, I know. One of my peeps, Brad, said to me, "well, at least you get to wake up tomorrow [on your birthday] and still be in your twenties." Hehehe, true story. Geof and I gorged on sushi and Sapporo, then he wonderfully sat by while I gushed over the season premier of Grey's Anatomy. That's right, I said it, I'm a Grey's fan.

Another Chicago Trash Runners run tomorrow morning, then we're heading back out to Palos Hills for another CHUG long run on Sunday. Can't wait!

Sounds like a good week, Paige! 'Cept for that stomach thing. Maybe eat something next time before you go running. You know us ultrarunners gotta train our stomachs as well as our legs. Eat more food!

Happy birthday all over again.

Thanks, D-Ray :) It's weird how the tummy works because I can handle most food, in large amounts, WHILE running during a race, but for some reason I can hardly eat before OR during a *training* run. What gives!

Happy Birthday from one Virgo to another!

Thanks, Jamie! But, little known fact, I was born on the very last day of Libra-ness...close call!

Aw, happy belated birthday, girl! Glad it was a good one. Dang, we are getting closer and closer to one that IS a big milestone--and I don't know about you, but I am not looking forward to that!

But YAY, you have races coming up . . . which means more fun race reports for me to read! I'm selfish, what can I say! :) Hope the training is going well!