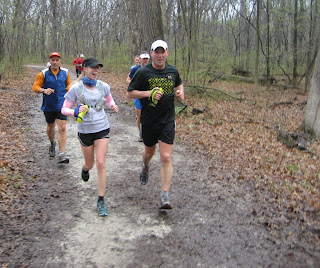 Remember reading about my running buddy, Gary earlier this year? Yea, the funny looking guy with the big calves ;) I only kid! Well that's Gary up there in the picture, and guess what? He's running his first 100 mile race this weekend! And what's more? He asked Geof and I to help him out and pace him through the grueling yet equally beautiful mountain range known as the Wasatch Mountains!

I remember when I first met Gary, aka Bison, back in January. He joined a running group I'm a member of and when I got the alert that we had a new member and I saw that he mentioned ultrarunning in his bio I thought, "I gotta meet this dude." A week later we were running along the lakefront path on a long run together, talking about his "crazy" idea to run a hundred miler, and that he wanted to run Wasatch Front...he was already in the lottery and all he could do was wait. Then, he got in. Whoa, whole 'nother story now! Now it was time to get serious.

A couple months later, I ambled into the bar our running group meets at twice a week to hang out (I was on injured reserve at the time) and Gary almost without hesitation said, "Paiger, will you please pace me at Wasatch?" What, no hello? I thought he was kidding. He wasn't. I accepted. Well, duh, why on earth would I pass up the opportunity to run around in the mountains with a great friend, and experience one of the toughest 100 mile races in the U.S.? Very soon after, Gary set about convincing Geof to join us as well.

And now it's go time. I have an inkling what Gary might be thinking/feeling right now, but it's gotta be pretty intense considering the magnitude of the race he's about to participate in. I mean, Wasatch is pretty darn hardcore! I'm getting antsy sitting here waiting to get going. I'm flying out this afternoon with Geof, and we're meeting Gary, his girlfriend and his parents out there (they've been there a day already). I'm pumped!!

I can't even begin to imagine what it's going to be like, but I do know it's going to be a rockin' good time, challenging, exciting, tiring, draining, and an overall amazing experience. I'll have the pictures to prove it, too :)

Good luck to Gary, and all the other Wasatchers!!

May the trail be with you, and not on you :)

A few of my friends will be there. That's definitely a tough one. ;)

Have a great time, Paige! Looking forward to pics and details.

Sounds like an amazing adventure, Paige. Have a wonderful time! Can't wait to read the story...

What an amazing adventure! I hope you have a great time at Wasatch!! Can't wait to read your report/see pics!!

Rock on, Pam!! That's awesome you and Susan got in!

My peeps, Wasatch was out of this world. I'm going to have to think about how I will describe it...it's an experience that I think every ultrarunner should have. More to come!

I like your blog. Maybe your blog could go trailrunning with my blog.

My blog loves trailrunning (bet that's shocking). Sounds like your blog is kinda fast, so maybe my blog will pace your blog through the last 20 miles of your blog's 100.