(FYI, that quote is from Point Break, in case you were wondering.) 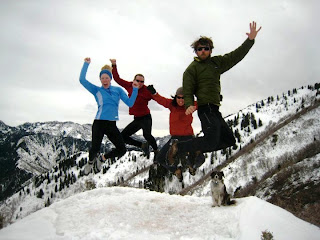 On the saddle of Grandeur Peak: Me, Geof, Rina, Rob and Lucy doin' it SLC Jumper-style
I love being outside, and I love seeing and doing new things.  Since I've voluntarily put myself on the proverbial bench for the last couple of weeks, and holed up in the gym/swimming pool as a back-up, it was unbelieveably awesome to head out west with Geof to spend a week with his Salt Lake City crew and get some much-needed outside time.  Yes, this is non-running material, but I had such a blast that I wanted to share it with you all :)  Rob, Rina and Lucy were our gracious hosts for the week and showed us a good ol' time in Utah.  Skiing at Alta in 20 degree whiteout conditions on the first full day, skiing in Park City in absolutely clear and gorgeous 50 degree prime spring skiing conditions the next day, a 3-hour snowshoe up to and over Doughnut Falls in the Wasatch Mountains, then up the Cardiff Trail and across an avalanche field...for posterity...on day three with Geof, Ben and Terry, and then a 3-hour brisk hike up Grandeur Peak in the Wasatch National Forest the next day.  Talk about some amazing workouts and fantastic cross-training for these humble legs!  I've never felt so good.
It was great to get that boost of confidence I was hoping for by handling the altitude well.  We got up to 10,500 at Alta, and spent a great deal of the time over 7,000.  Which is very cool.  It'll be my secret weapon at Leadville :)  It was also great to finally spend some quality time with R & R, and to meet the rest of the SLC crew.  Being surrounded by doctors also gave a sense of comfort knowing we were in good hands the whole time :)  As I'm not much of a skiier I was worried about taking some nasty tumbles, but, thanks to the supreme patience of the crew, I managed to have a really amazing time...including the couple times I took off my skis and scooted down a steep run I didn't feel comfortable skiing down :-)  No, I'm not kidding.  No shame.  (P.S. I'm terrified of steep pitches and going too fast...I've never been drawn to that, but I really enjoy skiing on the flat stuff!) 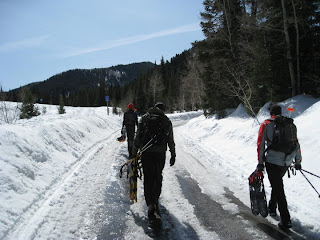 Terry, Geof and Ben, hiking up the road to the Cardiff Pass trailhead
This was my first time snowshoeing and I was pumped when Ben suggested we do it.  Rob outfitted Geof and I with proper avalanche safety equipment (including shovels and the beeper thingy you're supposed to wear in case you get stuck in an avalanche, which I am modeling below...): 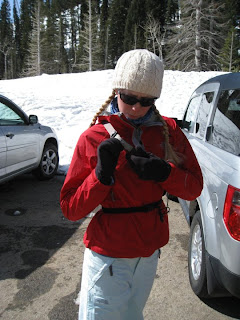 It's kinda scary knowing that's a possibility, but I think that may have added to the fun a little :)  We climbed up a frozen and snow-covered Doughnut Falls, me sweating my ass off from my heart pounding through my chest as we ascended the nearly vertical pitch of the Falls.  Ben and Terry scrambled up like it was nothing and Geof hung behind me as I whimpered quietly, grabbing branches and trees for dear life, looking back at the gapping hole (that was deep enough we couldn't see the bottom of) just below us...that could have ended badly.  But, after that part, it was smooth sailing and we stuck to the snowmobile trails, which led us through a relatively fresh avalanche field.  After two hours, we were spent and turned around to head home.  What FUN!

The next day, R & R took us on a hike up Grandeur Peak.  It was overcast and a little cool, but still warm enough to leave the jackets in our packs most of the time.  It was a really pretty hike with tough footing in some places, and after some jumper photos at the top of the saddle, we headed back down and I could hardly resist the urge to pick up the pace and turn it into a run.  It felt so good!  Makes me wanna run the Wasatch 100 some day...

I love how much stuff there is to do out there, and that everyday can be something a little different.  It felt great to get some fresh, lower-oxygen-content, air to get the red blood cells working overtime and the heart pumping faster.  Make sure to check out Coffee Garden at 9th and 9th if you're ever in SLC...the best vanilla lattes.  And, if you're looking for something a little different and a lot healthy, stop by Oasis Cafe for some delicious eats.  We were there during Earth Hour and they turned out all the lights and lit the main dining area with candles.  Two thumbs up.

It's nice to return from a vacation not feeling lumpy.  I feel revitalized, and my legs feel really good...almost good enough to let them go for a run!

So does wearing my Atayne CHUG shirt at 10,500 the highest elevation for an Atayne shirt so far??  Hmmmm...

Sounds like lots and lots of fun!
Snowshoeing is great - I am with you on skiing the mellower stuff. Park City is awesome - we've only been there in the summer - lots of wonderful trails to run and bike! Get all the altitude you can!
Kathleen