2010, you sure have been good to me.  It was a year of coming into my own; a year of discovery, if you will.  This is a fairly random post, but I get a kick out of summarizing my running year...

I discovered there is a small muscle that lays buried behind your knee, the popliteus.  This little guy gets pissed off on the trails of Texas hill country.  It put me out for 2 months.  Lesson learned? don't run in Texas.

I discovered that doing planks daily gives you a cute little 4-pack.  I like 4-packs.  Maybe one day I'll have a sixer :)

I discovered that Leadville iiiiiiiiiiis...something.  What word am I looking for here?...oh, yes, a beeyotch!  But it was the best training of my life thus far.  Lesson learned? train in fear, and even if you don't achieve your first goal, you'll find a second goal and totally rock it.

I discovered that I didn't actually need to be wearing orthotics.  Cool.  That saves me $500!

I discovered that I can handle elevation quite well.  I just couldn't handle Hope Pass a second time, this time around.

I discovered my love for Geof only continues to grow more everyday.  And that's a pretty neat thing.  Turns out, he feels the same way and on November 19th he decided he wanted to ask if I'd like to spend the rest of my life with him.  Sweet!  Of course!!  So now we can go ahead and assume that 2011 is going to be even more rocking than 2010.  I can't wait to start our lives together, officially!

I discovered that La Sportiva is my favorite shoemaker in the wide world.  For now.  I seem to be fairly fickle in my shoe love, but my Sporties managed to capture my heart for all of 2010, and that's pretty amazing.

The discovery of, and continued adoration of, a few of my Favorite Things has left its mark on my 2010.  Wilderness Running Company is my favorite trail running resource, both for gear and for information.  They rock.  Atayne continues to be the apple of my eye.  The future looks bright for Atayne and I'm looking forward to their continued growth as a company that makes good and does good in the world.  La Sportiva Wildcats are the love of my shoe closet life.  *Long contented sign*  My recent discovery of Icebreaker has shaken my world.  IB is something every runner/active person needs in their closet :)  RecoFit makes top notch compression and it's the only sleeve I'll wear.  Susan (the brains behind RecoFit) is a seriously awesome lady with a really amazing product.  Nuff said.  And what Favorite Things List can be complete without Drymax?  Happy feet make a very happy runner :)

Let's see, oh, yes, I discovered how awesome a gal fellow blogger Gretchen is.  I was honored and stoked to have her along to crew and pace me at Rio Del Lago 100 this year and couldn't be happier with the whole experience.  I still have yet to lose those two toenails, by the way.  The new nails have already started to grow in and push the old ones up, so it's just lots of trimming for now.  I'm a huge whussy and refuse to rip them off :)  Nice visual, eh?

I learned some things about myself this year, too.  Like that I was (WARNING: very dramatic statement follows!) terrified of dying climbing back up Hope Pass, and terrified of the failure that came with such a demise.  I didn't die, obviously, but I was such a sobbing slobbery mess that at the moment my wristband was snipped off I sorta felt like death was more appealing.  I did learn, however, that in the face of failure I can rise above and extract the silver lining.  Of course, that didn't come without a short spell of total self-pity first (and a lot of snot).

I learned that failure lights a serious fire under my ass and that I could probably solve all the world's problems if I was a constant failure.  Thank goodness that's not the case; how stressful would that be?! ;)

I've learned that all good things come in good time.  Being a good person and believing in the basic goodness of others makes you feel really warm and fuzzy.  Suddenly the world doesn't seem so scary when you decide that it isn't.  It helps to not read/watch/listen to the news.  Actually, that is a very vital part of this equation :)

Amazing Grass's Berry SuperFood makes my world go 'round.  A couple months ago, Geof and I decided to give it a try, and now we have it in our fruit smoothies most every morning.  I notice it on days we have missed it (when we're out of town...but they do have little travel packets for those occasions!).  I love the stuff.  I'm learning the value of a truly balanced diet, and incorporating more whole foods and fresh foods.

I learned that I am an overly cautious person in my running.  Not every little ache and pain is a limb about to fall off, a bone about to snap, or a tendon about to explode.  When you get to the point that you'd actually consider inviting your chiropractor and sports medicine doc to your wedding, you know you have a problem.  I had to cut myself off and tell myself to stop being such a candyass.  "Suck it up!"  I am happy to announce that it has been over two months since I've gotten any ART treatments :)  Thank you, thank you.

One of the many wonderful gifts of 2010 has been the friendship of two very awesome people.  I met Brian and Kelly, aka the "Brelly", when I joined the CHUGs back in early 2009.  This year there was hardly a race run, experience shared, or laugh had without the Brelly.  We traveled to Rocky Raccoon together in February, had the honor of attending their wedding in May, experiencing Leadville in August, and the absolute stoke of sharing in Brian's conquering of the 100 mile distance in September (and those are just some highlights).  I'm looking forward to all that 2011 holds and sharing all sorts of new and different life experiences together.  Life is so much better with amazing friends to share it with.

Well I believe I started my 2010 with a mileage goal in mind.  It was a tad lofty for me, but I also wasn't intending on missing out on over two months of running due to injury (some of February, March and April).  Ah well, life, lemons, lemonade and all that.  I came back much stronger, and lots more balanced :)

After tallying it all up I come away with a new personal best, surpassing my 2009 mileage by a bit: 1,341.5 miles...precisely 259 hours of wonderful time spent doing nothing but running.  Only 340 of those total miles were race miles, which is a HUGE change from 2009 (which had something like 800 or so miles spent racing of ~1,314 total miles for the year.  Wow).  So, that means I spent waaaaaaaaaay more time training this year...and that is a very good thing for this lady :)

Goodness, what a truly incredible and exciting year 2010 was.  But seriously, 2011 is going to trump it.  I can tell you that now!

And now for a quick shot of one of my favorite pictures from the year: 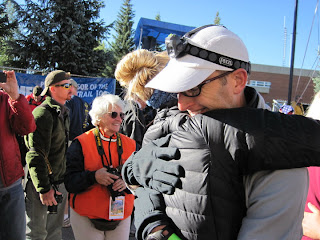 Geof and I, just after he finished the Leadville Trail 100 mile run
I very minimally considered goals for 2011, but after reading this post I decided it's not entirely necessary.  I very much enjoy Dax's style and approach.  I would like to push myself a little more in 2011.  I pushed it in 2010, for sure, in training, but I think I am capable of far more.  And, rather than getting caught up in numbers and times, I'm going to just enjoy each step I get to take along the way to whatever I decide to do on each trail.  Love the run, be the run.

Nice recap Paige!!! Thanks for a great blog and Congrats on a good year of running and learning and, of course, Congrats again to you and Geof.
Have a great 2011,
Gene Taylor

Congratulations on a great year of racing, training, and learning. Your Leadville report was one of the best things I read this year. Thanks for sharing your journey with the rest of us.

Julianne - planks are when you hold your body up, like a "plank", on your forearms and toes. Google "Planks" and images and videos will pop up. They are awesome! There are lots of ways to modify and increase difficulty as they get easier, too.