Busy, busy, busy. I have some catching up to do...I'll split it in two for more bite-sized portions :)

After my BFT jaunt, I felt that old familiar pain in my right shin. For awhile, the pain was something that was always there (well, at least since March of this year), and when it began to dissipate late summer it almost felt strange to be pain free. I know, totally and completely ridiculous. However, when it made an encore appearance a few weeks back, that sinking feeling returned with it. What if I've really done it this time? I saw my PT, Laura, upon return from the BFT and when I told her what I had done she slammed her hand down on the table and shouted at me. Not even kidding! She was miffed. I guess I hadn't really thought much about the mileage I'd been putting in lately, but two 30-milers, three weeks apart, on my "training" was probably not the best decision I could have made. You live, you learn.


So, we decided I needed to get an MRI now that the pain in my shin was narrowed down to a very specific spot (usually a sure sign of a stress fracture...and that means a boot and 6-8 weeks of no running whatsoever, aka hell). I first had to see my doc to get a prescrip for the MRI. He wasn't exactly thrilled with my achievements of late, but he also assured me he was almost positive I didn't have a fracture because I was still walking without any pain, and when I did feel the pain in my shin it was only when I was sitting still. I like to rest easy at night, and I like to get down to the bottom of things without a lot of fuss, so I said I'd prefer to go ahead with the MRI and find out now.

I love coming up with different meanings for acronyms...like BFT, MRI, DNF, etc. So coming up with ideas for MRI kept me relatively distracted. In case you didn't know, MRI stands for magnetic resonance imaging. I've never had one of these before, and didn't know what to expect. Basically, you go into a tube, on your back, for 45 minutes and listen to music while the machine vibrates and clicks around you. Thankfully, since it was my lower leg in question, my head didn't go into the tube, but I was in up to my ribs. I'm terribly claustrophobic and I had my hands clamped together so tightly that my rings were digging into my fingers and I had marks from my fingernails! I didn't realize this as I managed to doze off fairly easily. I was very much aware of how loud the machine was though and it felt as if the entire building were shaking. Oy, I hope I never have to get another one of these. I probably would have needed to be sedated if I had to go all the way in...the tunnel was verrrrrry narrow and I'm pretty sure I would have stopped breathing in it. Elevators still give me the heebie jeebies sometimes :) 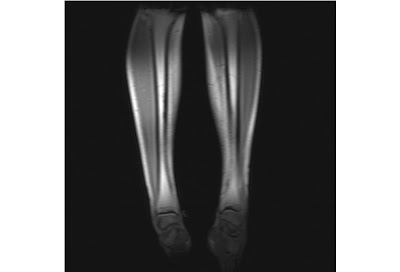 An insider's look at my lower legs, from the backside...looks kinda funny!

Two days later, I'm in my doc's office and we're going over the results. No stress fractures! Not even a hint of one. So now I'm confused. What the hell is wrong with my shin then?! There is some fluid build-up in the exact spots I feel pain, on both sides, and it's very clear that my calves are tight. So other than a suggestion to get a few more deep tissue massage treatments, upping my caloric intake, continuing work on my mechanics and following a more conservative training plan, there's not much to do. I'm planning on pacing Mike the last 23 miles of his 50-miler in a couple weeks out in San Francisco, and then the following Saturday there's a Fat Ass 30-miler at McNaughton Park in Pekin. Doc said, "pick one, please just pick one." The temptation to do both is insane. Where does this come from? In a previous life, I would have intelligently weighed the pros and cons, and decided the best course of action. Now, I just sort of throw caution to the wind and do what I feel. You only live once!

In any event, I'll pick one. Most likely, I'll be sitting out the FA30. I will do everything I can to make sure Mike crosses the finish line under the 12-hour cutoff of his first 50-miler! I will carry him on my back if I have to! He'd do the same for me.


I took almost a full two weeks off from running, begrudgingly. I did the stair climber and bike at the gym, and continued with my usual strength-training. Not running absolutely sucks. Well, not running not by choice sucks. I have no problem not running when I've made the choice myself to skip a run, or take a rest week. But when the universe steps in and stops you it sucks. I get in a funk when that happens, and this year has been epic in that department. Obviously, it's high time I start taking a more serious approach to my training. Ultrarunning is no joke, it's no skip-in-the-park 10k where I can halfass my training and crank out a very decent time on race day. I've entered a world where the distance is serious and the resultant injury that can occur due to a lackadaisical training approach is equally as serious. So, to the drawing board!

I worked on a training plan today, based off of something I found on the Santa Clarita Runners' website. It's pretty cool. You enter in your event date and the distance, and it cranks out an Excel spreadsheet training plan you can download. I didn't totally agree with the one that I got, so I tweeked it and changed it from a 5-day running week to a 4-day week, and I changed the weekly mileage range to 20-48mpw. The original plan called for a max of over 60mpw on some weeks...to me, that's excessive. I think 30-50mpw is perfectly doable, at least in training for a 50-miler. Hopefully I can stick to the schedule! I'll change days around as needed, but I plan to cover the alotted weekly mileage one way or another. Of course, easier said than done :)

I'm sitting here with my shin wrapped tightly in an ice pack. It feels good.

Up next: another installment of Team Atayne...this time we invaded the Chicago chapter of Girls on the Run!

"The will to win means nothing if you haven't the will to prepare." - Juma Ikangaa, 1989 NYC Marathon winner
Posted by Paige at 4:29 PM

Paige!
Had no idea you were dealing with this (and that you'd had to deal with it before).

Take it easy on yourself, lady! You know that by being responsible now, you're granting yourself more miles in the long term.

You guys will be out in SF in just a little over a week now, right? I expect to see a good pic up here of the two of in front of the Golden Gate!

Ah, yes, been almost all year, kind of on and off with it. Sometimes I think I might always have shin pain no matter how many times I take 5 weeks off of running, grrr. Other than SF, no big runs planned until maybe new year's.

There will absolutely be numerous pic's up here post-San Fran, I cannot WAIT! Yep, one week away now...

I'm still waiting for the 790's, hopefully they arrive before next weekend so I can break them in all over San Fran :)