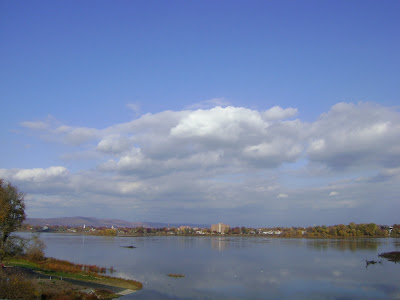 Welcome to God's Country! GC is also known as north central Pennsylvania for those who haven't ventured to this 'remote' part of the country. Remote in the sense that it doesn't have towering monoliths of glass and steel clogging the skyline, but rather towering mountains (or, hills?) stuffed with greenery and trees, even at this time of year. The ground is covered in a layer of golden leaves freshly fallen and the air smells funny. Of course, 'funny' means 'not polluted' to the city girl in me :) PA is the location, the goal: to hike the 42-mile Black Forest Trail (BFT...I have some choice ideas for what "BFT" stands for now!) in the Tiadaghton State Forest; the reason: because it's really freakin' hard and the group we were joining wanted to defeat the trail once and for all. An attempt was made earlier in the summer by Mike and some of the other guys, but extreme heat, serious elevation, and some other factors played into an incomplete. Honestly, I hadn't the foggiest idea what I was getting into, even more so than normal :) Mike made sure it sounded as awful as possible to prepare me, and thank goodness he did!


I flew into D.C. Thursday evening, where Mike picked me up with Jackson in tow. Jack almost jumped out of the car window in excitement when he realized there was going to be another human to pet and pamper him on the car ride home. So, Jack's got his front paws on the center console, leaning against Mike and we head back to Camp Atayne to squeeze in some sleep before our road trip up to PA...well, not before getting a pint of mint chocolate chip ice cream on the way (hey, it was carbo-loading!).


Getting up early, we set to getting everything ready and put into the car. This included making LOTS of coffee. A stop at the REI to get some camp chairs and a few other small items for the trip, and we're off! An aside: I say that a lot in these blogs, "and we're off!" My mom asked me, "do you guys ever not have plans for grand adventures?" Sometimes...but I guess not really :) We kind of suck at sitting still. So, we're off! I have the (tiny) directions in my lap, and Mike's behind the wheel. Seriously, these were the smallest directions I have ever seen...I had to have the paper inches from my face to see them, hehehe.


Driving up to PA was gorgeous, it definitely beats out the grim scenery through Indiana or Ohio. Lots of small towns, and "Americana" as Mike put it. We even drove past the Little League Hall of Fame in Williamsport, PA. A lot of the drive, once in PA, was along the Susquehanna River...that was my favorite part, very picturesque. Around 4:00ish we make it to the campground with just enough time to set up the tent in daylight. 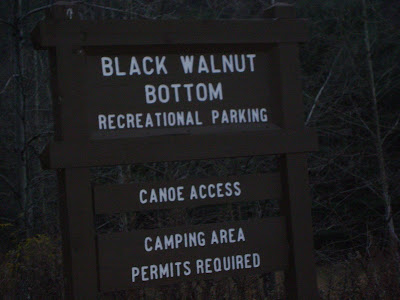 As soon as we arrive, Tonya and RamblinRev greet us. What a character, that Rev! PARidgerunner, Cowanesque, Spikehiker, Blackjackhiker and Trail Goat are also joining us. Six of us were going to attempt the 42-mile BFT: Tonya, Mike, PAR, Cowan, Trail Goat, and myself. We all sat around the campfire and talked shop, ate some chili, roasted marshmallows, and then PAR commenced with the briefing. Wow, talk about some serious organization. The maps and trail description were in color, and they made sense! After the brief, I felt much better about the whole thing. Cowan was going to be our sweeper on the trail...the sweeper follows behind the last hiker/runner until the end...I was very grateful for this, knowing that I wouldn't be alone at any point if the others shot ahead.


At some point, I walked back to the car to get everything organized for the morning so that I wouldn't have to deal with it at 5a.m. in the rain. It was a bit of a walk from the site to the car and I'd be lying if I said I was totally excited to make that walk alone, twice. It was pitch black out, but I had my headlamp. My creative imagination came out of hiding and put all sorts of ideas in my head...a serial killer was lurking in the bushes, a bear was waiting to pounce, rabid wolves, zombies, the kids from the movie "Children of the Corn", snakes, Mike Meyers from the "Halloween" series was stalking me, etc. I made it to the car, though, unscathed, and got to prepping my drop bag with a change of clothes and getting my clothes together for the start of the madness. Mike's car has an alarm that actually works, and silly me locked it with the key fob from the inside of the car, so every time I moved the car alarm went off. I didn't know I was supposed to lock the car from the door locks. Woops! I think the alarm went off every 10 seconds for the 10 or so minutes I was in the car. The guys loooooved that one. The way I look at it, I scared off any predators lurking outside waiting to have me for dinner :) When I got back, Mike went to the car and got all his stuff ready, and packed a massive amount of food in our dropbags...even made peanut butter wraps, my favorite.


Around 9:30, we all decide to hit the hay. Rev is using one of those tent hammocks, and the rest of us are in tents. It was cold, but I somehow managed to sleep really well. Around 3:30a.m. the rain began. At 4:00 Mike got up to go get the coffee ready and warm the car. I slept a few more minutes, then worked up the guts to walk to the outhouse a couple hundred yards away, in the dark...alone. I'm pretty sure a bear was following me, or at least Freddy Cougar. After I changed in the tent, I walked towards the car, passing Tonya who says we're going to wait out the rain a bit, and leave at 6:00 instead. Sweet mother of love, thank you! So, Mike and I sat in his car and ate some breakfast, made some more coffee (the first batch boiled over, oops!), and listened to Bob Dylan to kill some time. Trail Goat was asleep in his car and would be joining us later on, he got in really late that night. The rain kept going, and going, and going... At one point I suggested Mike start his car and let the engine run for a few minutes since we had the lights and radio on for awhile. But noooooo, we'd be fine :) Mike played around with his gear and did his best 'creepy dude in the woods' look... 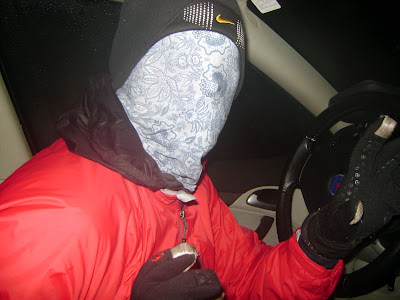 I think it was 6:15a.m. when we all squeezed into Tonya's SUV and drove to the trail head. Yes, it was still raining. Tonya, Mike, Cowan, PAR and I hopped out, adjusted poncho's and headlamps, took some pic's (hey, PAR, where are those pics?) and then took to the trail. It was dark, cold and wet and would stay this way for another 30 minutes or so. The first climb was a beast, but well worth the view we had. By now we were able to ditch the headlamps/flashlights, and the poncho's, but it was still drizzly and the ground was very well saturated.


Top of the first of three big climbs... 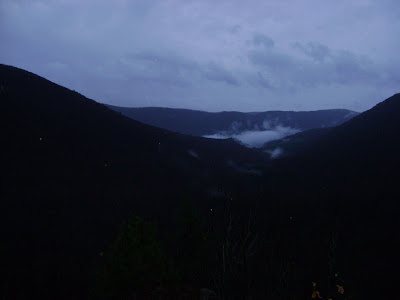 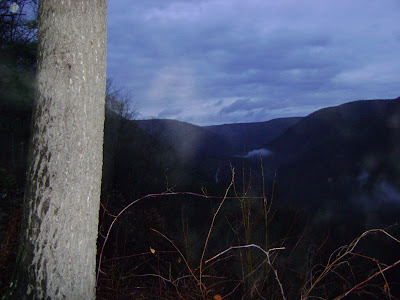 I already look completely exhausted, and this was barely four miles in, oy! 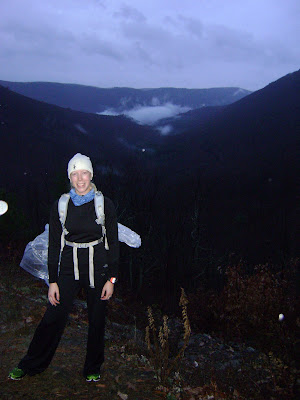 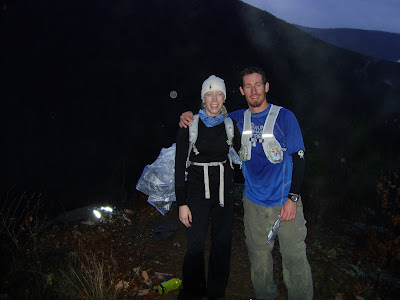 PAR...he was kicking all our butts with those hikin' legs of his (or as Mike put it, he's like the murderer in the movies, no matter how fast you're running, he is walking and he always catches you)... 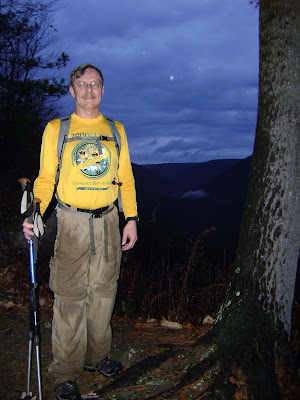 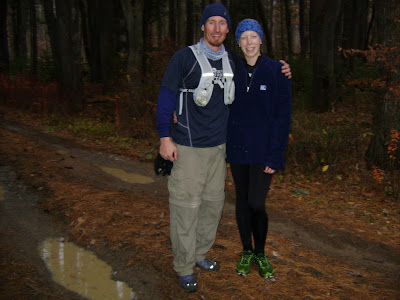 Rev announced that Trail Goat had come through 5 minutes before us...speedster! We couldn't believe we were that close to him. TG had started an hour and a half after the rest of us, and then continued to pass us towards the end of Naval Run, he was trucking it (not to mention, he had a 20lb. pack on, too!). TG went on to AS 5 and called it a day there (at 35 miles). Mike and I waited for Cowan and PAR to get in and we all hung around for a bit. Cowan and PAR decided they wanted to try and finish it so we wished them well, then got into the warm car!! Spike and Blackjack drove us back to the campground where we were going to change and then head over to the Manor Hotel to eat and wait for the others to show up. We got in the car, only to find that the battery was completely dead... :) hmmmm While considering changing then just walking the mile or so up to the Manor, a truck pulled into the otherwise deserted lot and Mike asked for a jump. Thank goodness!!! What lifesavers.
Happily nestled inside the Manor, we proceeded to order the following, and ate it all: huge bowl of clam chowder, endless coffee, salad, steak, mashed potatoes, mozzarella sticks, and wine. Divine. Trail Goat showed up soon after us and ordered a sampling of the entire appetizer menu, with beer and coffee. We were all a sight for sore eyes! TG made it to AS 5 as planned, then came straight to the Manor. Eventually the others started trickling in. Mike ordered that round of beer as promised. After a few hours eating, Mike and I headed back to camp and then decided to just pack up and start driving back to D.C. So, we stopped at the Manor to say goodbye, and just then Cowan and PAR arrived. They finished!!! And I think it was an hour ahead of when they planned to be done. Nicely done, guys! We said our goodbyes, and then hit the road. It was late, we were in a food coma, and totally spent. A stop in a teeny town for some Dunkin' Donuts held us over for a little bit, but as soon as we spotted the Holiday Inn Express along the highway, we were sold! That is the best hotel-bed sleep I have ever had, hands down. Slept like a baby. After some continental breakfast we finally set out around 9a.m. on Sunday.

Wow, what a trip! It was a lot of fun, incredibly challenging, tiring, cold, wet beyond description, and totally exhilarating. It took us 9h:40m to complete what Mike and I did. It was tough. As soon as I get over Naval Run ticking me off, I'll be ready to try it again, and finish the whole thing. I highly recommend this trail to anyone looking for an all out butt-kicking and really good time.
I made it out with zero blisters (miraculous!), and barely any aches (doubly miraculous). However, my shin has come back to haunt me. I'll be getting that checked out next week. Meantime, I'm still basking in the glory of a fantastic day in the woods with some truly remarkable people.
Paige, out.
Posted by Paige at 10:52 AM

sounds like a great day out on the trails, nice job to you both!