It's been a busy racing year for me...wow! I signed in to check my calendar and noticed I've completed every race on it, and it's now time to retire 2008 to a sidebar as a reminder of all I've done this year, and time to post my 2009 calendar as I've already got a few races lined up :)

Last weekend I ventured out west, to San Francisco, to crew Mike through his first 50-miler, The North Face Endurance Challenge Championships. I haven't been out to California since 2002, so I was excited to get back, and to see my very favorite running partner in crime :)

The four hour flight got me there an hour early and I now had another four hours to kill while I waited for Mike's flight to land. My butt fell asleep sitting on the floor in the baggage claim area, but I was certainly entertained with all the people watching, managed to finish a copy of Runner's World I'd held off reading for a couple months, and made a serious dent in my latest book of choice, The Universe In A Single Atom by His Holiness The Dalai Lama. Sidenote: I picked up this book after reading Mike Bouscaren's Ultrarunning: My Story (he suggested the book). It's very interesting and thought-provoking, but not recommended to anyone who doesn't enjoy the argument of science v. religion.

Once Mike arrived, we got a rental car and headed into the city to pick up his race packet at The North Face store and then get some food! 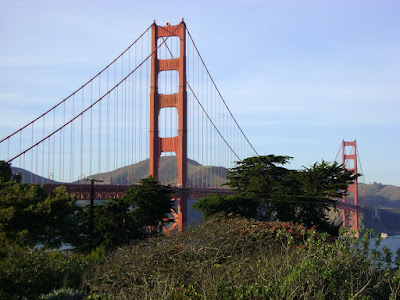 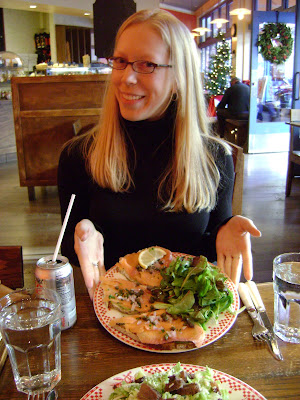 Once we found the hotel, in Mill Valley, Mike finished up some work and I laced up my road runners and headed out for a little run to get the legs ready for the next day. It was gorgeous! I had no idea where I was, so I strapped on my Garmin 305 so I could at least keep track. I ran down Redwood Highway (interior) and turned on a hilly side street that lead towards the mountains. This street dropped me directly onto one of my favorite surfaces...single-track, woohoo! I followed the make-shift dirt path as it wound through some marshy areas and then into a small peninsula area in the middle of a sort of inter-coastal waterway. Mt. Tamalpais loomed in the distance. There was a dog park in the center and a crushed gravel path that went around it. I took this until I reached about 2 miles and saw more single-track coming up that led onto the peninsula (also a national scenic wildlife reserve) and took this until it hit a dead end at the water's edge, then turned around and headed back to the hotel. The sun was setting and you could see it reflecting in the still water, and as it disappeared behind the mountains the colors changed quickly before it got dark. The run turned into just under 4 miles. Excellent. It felt good, especially considering I hadn't run in seven days while I rested my shins.

Dinner at this awesome Italian restaurant just north of where we were staying, and then we relaxed in the room and watched The Distance of Truth to get all psyched for the next day. Great documentary about the 2005/06 running of Badwater 135. We woke at 2:45 a.m. (!) and started making motions to head out. I'm glad we had organized everything the night before, and I went over directions for crew, pacing, etc. We had to meet at Rodeo Beach where we'd take a shuttle bus to the start/finish area. Once the runners started, the shuttles would take crew members back to the Beach to get our cars. 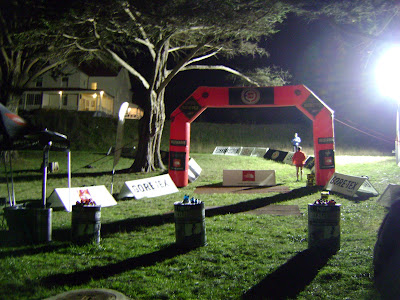 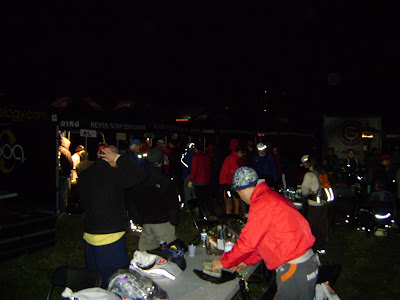 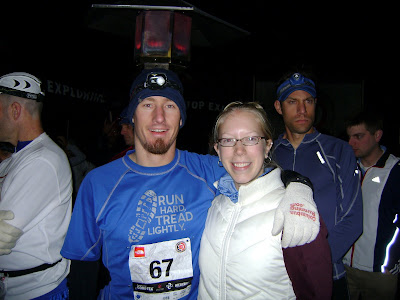 Pre-race shot, standing around the heat lamps...it was FREEZING!

Thankfully, a really nice North Face staffer gave me aid station directions...I had no idea where I was going and definitely would have gotten lost without them. Once the runners were off, the next stop for crew was Tennessee Valley/mile 8ish. I got there early enough to squeeze in a half hour nap, and then got Mike's water bottles ready. I ran to an outhouse quickly as I assumed I had another half hour until Mikes projected arrival at the station, but as I was coming out I saw him running up...a half hour early! Quick swap of water bottles and handing me his headlamp, he was off again, an now it was time for me to make the long drive up to Pan Toll/mile 18 and 31. Emphasis on LONG. And winding, and steep, and scary at times. But, I made it :) 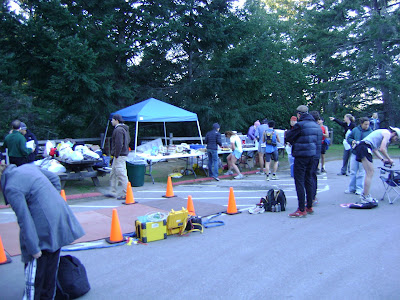 Pan Toll/mile 18...Runners would come through here again after Stinson Beach. I saw Nikki Kimball (at the table) and couldn't resist taking a pic. I was surrounded by ultrarunning greats!

Mike was looking good at the first go round of Pan Toll and though Stinson Beach AS was in 2.5ish miles, we decided I'd meet him there, too, as the biggest, nastiest climb was going to be after that and he'd need some refills for it. Stinson was really pretty and I had to drive along the ridge line of Mt. Tamalpais, which afforded some great shots from high up... 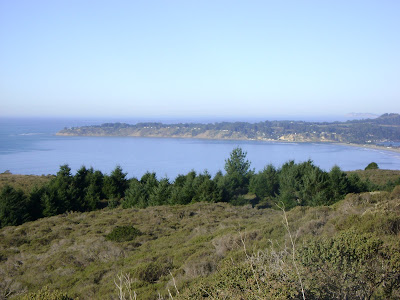 Stinson Beach is down below 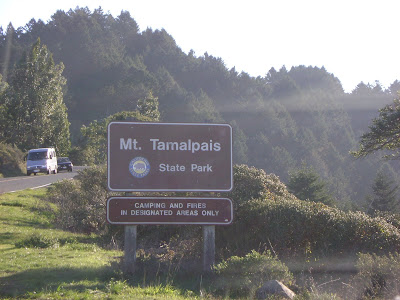 The site of all this craziness and excitement

After Stinson, it was back to Pan Toll for me to meet Mike at the 50k mark and begin pacing him from there if need be. The elevation in this race was unbelievable, I think it was 10,000 feet of gain and loss. That's a lot, especially for this flat-lander! The wait at Pan Toll the second time around was awhile since the climbing to get back up there (for the runners) was the worst of the whole race. I changed into my running clothes, got the water bottles ready, purchased a parking pass since I'd be leaving the car here for a number of hours, met a really cool gal from the area who was crewing for her husband (also his first 50-miler). We talked about trail running (my favorite) v. road running (her favorite) and I'm pretty sure I was able to convince her to give a trail marathon a shot! This helped pass the time and I should have gotten her name as every time we came into a station once I started pacing she was there cheering loudly for us, which was pretty cool since neither of us knew anyone there. Lots of big names were in this race/crewing for others: Krupicka, Jen Shelton, Kimball, Meltzer, Skaggs. I was putting stuff in the trunk of the car when I looked up and coming right towards me was Karl Meltzer (I didn't realize he was running it). I actually had to move out of the way for him to pass. Cool, don't see that everyday.
I walked back up to the Matt Davis Trail and waited for Mike so I could snap a pic of him coming in... 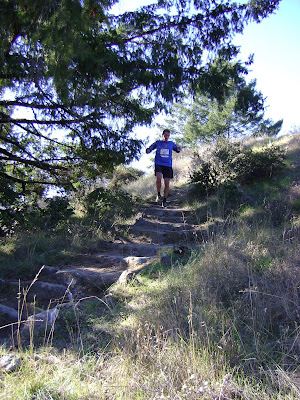 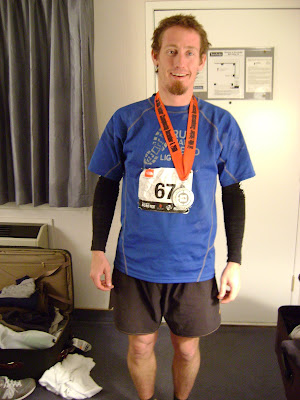 Happy to be DONE!
We were exhausted! Back at the hotel, we ordered pizza, iced our limbs and Mike passed out hard while I inhaled the cinnastix. The sugar tasted so good! We slept in a bit on Sunday, grabbed breakfast up the road, at the Dipsea Cafe (absolutely delicious!), then packed up and headed into the city to find a good place for coffee and hanging out. We found Lombard St. and I drove down it. Waaaaaaay too steep for my tastes and I was freaking out! At the bottom, though, the view was fantastic :) We ended up at Coffee Adventures on Columbus where we lounged on the couch and read the paper, then we wandered up towards Fisherman's Wharf. I had to hop on a trolley though and be touristy... 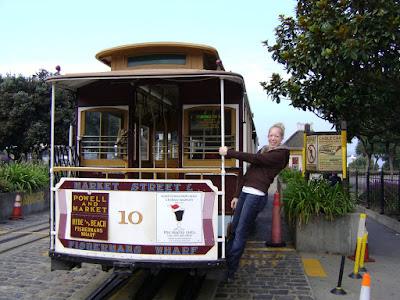 San Francisco is a great city, and I love the easy access to fabulous running trails :) I had a flight to catch though, so we headed to the airport where Mike dropped me off and he then headed to L.A. for work.
I had a fabulous weekend, tiring and short, but worth it. It's just what I needed and now I'm really pumped for my 50-miler in April, at McNaughton. We learned a lot from this race and we'll go into the next one much more prepared, and comfortable :) This was a great way to wrap up the year and our racing calendars. Now it's time to rest, but not for long...my 50-miler training starts on Monday, and Mike's got another in March (Bel Monte Endurance Run 50) to get ready for! 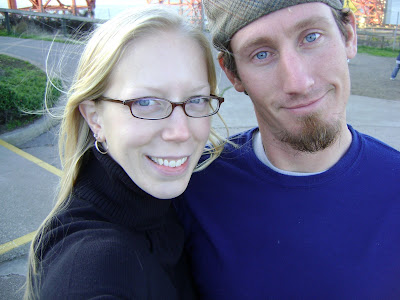 Beautiful recap Paige - thanks for leaving out how slow and painful that last 19 miles were for me :) For the record, the first 31M took about the same time as the last 19 miles...that's how much pain my quads, hams, ankles, and knees were. Wouldn't have made it without you for sure.

I figured you'd go more into detail on that in your blog :)