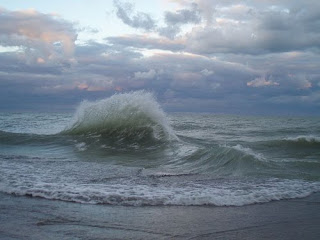 Chicago has been getting a lot of rain the last few days. A lot. But I guess we were kind of due for some saturation. I got in my five miles Tuesday morning, then shirked my running duties on Wednesday since I had class and it was going to be a really long day if I didn't get my sleep, so that meant I had to 'pay up' yesterday...in the form of 10 miles. Really, I only planned on 5-10, and however much I fell short of 10 I would add onto my weekend run. Whatevs, I wasn't set on anything beyond 5 :) I didn't run in the morning, so now this meant it was going to be an evening run, and luckily Geof wanted to join me for some extra miles. G had a work thing after work, so I did some studying after a quick 10-minute rejuvenation nap. I learned that there are three parts to the large intestine (of which I never knew 'colon' was synonymous with 'large intestine'...wow) and all about body planes. It's freakin' cool, not gonna lie.

Around 8:00ish, Geof walked in and we quickly suited up to head out in the rain for some much-needed runnin'. It was dark already, so we opted to run north where it's a little more lit along the path. The path was essentially deserted. More run for us! The city lights lit up the path nicely and it was fun to hop over the puddles forming in the cracks along the path. It was a medium drizzle, enough to let you know it's raining, but not enough to soak through. We had a pretty good headwind heading north, but once we hit the turnaround it really picked up. Geof commented on how that wind will feel in 20 degree weather in a few months, yipes! It was chilly last night, low 60's, but perfect for our run.

At the four mile mark I started to turn around, but Geof encouraged us to go one more for the full 10 miles...okay! He'd already done eight in the morning, so I was thinking he would tap out before 10, but he was all in! Sweet. My body was aching everywhere, hams, glutes, right soleus, left knee, lower back. Working out the kinks again, I guess. It's exactly how I felt post-Pineland Farms 50M, and we were only doing 10 miles! Oy vey. But, I kept on keeping on, listening to Geof's pleasant chatter about winter running on the path, the AVP set-up on Oak Street Beach, work and whatnot. He did a great job of keeping my mind off how good I did not feel. Until the last mile, then it's all I could think about, lol. That, and dinner.

We passed a few peeps that were also braving the elements...quick glance, smile, wave, continue. The waves along the path were building up, churning, receding, pushing, splashing, but even moreso on our way headed back south. They were huge! When they hit the retaining wall they splashed up way over our heads and crashed down on the path. We had pretty good timing and avoided getting splashed on until Fullerton Ave. when we got dumped on...it was exhilarating! There were some kids standing on the boulders along the wall, shirts off, waiting for the next wave; ah, to be a kid again. It would be interesting to see what the lake dug up and pushed up on the shoreline in all that wavey action :)

Another good run, tough, but good. It was a good reminder that I need to put in a little more time on my feet. Last night's 10-miler is officially my longest run since Vermont. Booya. I need to get crackin' and quit slackin'!

One more 10-miler this weekend (or two 5-mile runs) and I'll be set for the week. The Chicago Triathlon is this weekend so maybe we'll get to spend some time down there checking it out... :) Who knows!

Love running in the dark and in the rain. Bonus combo! Thanks for taking us along....

Oh, and p.s: You are a kid! And I mean that in the best possible way.

Love that. :) Good running and big props to Geof for going long, long.