In an effort to not lose my mind by taking some time off running to repair my very angsty legs, I decided to something verrrrrry different this morning.

Rather than wallow in self-pity and perform half-assed PT exercises while wishing I were out running instead, I decided to go and swim laps.  Of course, I still did my PT exercises.

I know, I know.  Who does that?  Voluntarily?  Well, it wasn't pretty.  I haven't done laps in a pool since high school.  No joke.  I wasn't sure what to expect, but I did know I wouldn't drown.  Always a good thing.

I'll set the stage: I put on a lap swimming-appropriate suit that I bought with good intentions over 5 years ago (it has since only ever been used for sitting in ice baths and salt soaks), grabbed the 2 year old swim cap that was still in it's original packaging (yellowing price tag intact), and the goggles I won in a raffle from a local running store last year...also never used (weird, I won swimming goggles from a running store...).  I marched my happy ass downstairs and eased my weary legs into the warm bathwater-like pool, trying not to imagine all the crud and bacteria that is likely floating around in there, dividing and multiplying at astonishing rates, waiting for a human host to leech onto.  Gross.

I flicked my hands around in the water and la-di-daa'd for a couple minutes before finally taking the plunge.  It's not an olympic pool, it's pretty short, so I have no idea how long a lap is.  Come to think of it, I couldn't even tell you the length of a lap in an olympic sized pool...but at least I could Google it :)  I started out doing a mishmash of different strokes I could vaguely recall learning in high school swim class.  Then I settled on switching between freestyle and the breast stroke.  Easy enough, but I'm sure my form would offend many a tri-athlete :)  Whatevs, I was moving, and not sinking, so I kept it up for 30 minutes.  My heartrate was through the roof each time I had to turn around and swim back.  I was doing the motions, but my mind was on a trail.  I was thinking how good it feels to run, and how ridiculous swimming feels.

This is what I get for being a stubborn ultrarunner.  I have an idea what my personal hell would be like, and it would definitely include a pool.  And lima beans.

In the end, it felt great to be moving and to get the ticker ticking faster than 50 bpm.  My popliteus was happy and there wasn't even a twinge in the peroneous.  One day, I'll get to run again!  But in the meantime, I need to keep moving and not lose my mind.  Before I know it, I'll have moves in the pool like this: 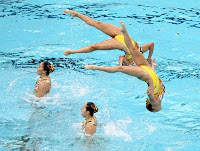 Okay, not really, but that would be pretty funny.
Hopefully I can get back to running before too long, but I need to make sure things are back in working order before I ask too much of my legs.  It's frustrating but what can you do?  :)
Crash, out.
Posted by Paige at 10:45 AM

Thanks for your last few postings. Especically this one. I have been dealing with a bad foot. I missed a Half Marathon this past weekend due to it. I have put in only one 5 mile run over a week ago. Which of course made the injury worse.

I have nothing in common with bricks. Except one - we swim and react the same in water. Okay, I have been trying to swim as well during this time. Yes, I too lope (is this really a word?) along the lanes slowing everyone down. I have gotten some nice words like find another time to drown dude. That was my last time swimming - at least with others doing laps. I will never be Triathlete.

Well it's great you're doing something! Sitting around feeling sorry for ourselves never turns out well; anything is better than that, even swimming :)

I hope your foot decides to get with the program soon!!

Quit making me laugh out loud while I have something in my mouth! There's no shame in swimming. But there are two "i"s. Hang in there!

Next thing to try: water jogging. Serious! As well as being incredibly goofy, it'll make you a stronger runner than you were before getting injured. How can you resist? Go get that flotation belt to complete the ensemble and run! in the pool!

Yep, we share the same view of swimming...that swimming just seems ridiculous. When I get asked to do a sprint tri with my sister, I always blow off the swim training. Luckily it's the shortest segment and first so it's out of the way. In my last tri, my mood changed significantly once I put on my running shoes and was off to run...I am definitely a runner, not a swimmer, cyclist, or triathlete!

Great job on getting movin' -- even swimming makes your mind and body feel better.

Good for you getting out there Paige. Cross training is awesome and will keep your heart strong as you rest those legs of yours.

I know the feeling you are talking about going into warm pool water though and I get the same heevie jeevie's wondering what I am swimming in. LOL regarding the lima beans as I am so with you on that. The only veggie I don't like. :-p