The Runs We Live For 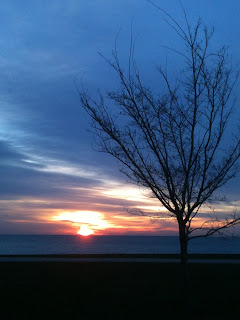 Sunrise on the Chicago Lakefront, at 39th Street - October, 2010
Yesterday's long run was something to behold.  It was just what I wanted it to be.

Geof and I were up and at 'em by 7:15, loving that the sun was already up.  After some solid relaxation, some tasty soy lattes (courtesy of Geof's mad coffee-making skillz) and some hemming and hawing about what to wear for the weather, we headed out the door by 9:30.  It was chilly outside (low 40s), but was set to warm into the upper 50s before long so we opted for lighter clothing in hopes the weather would stand by its word.  The sun was warm on our faces as we headed north into a pretty decent and chilly headwind.

I had one bottle of Gatorade and a thingy of Honey Stingers (my new favorite running food...and what do ya know, I just noticed the company is in Colorado, which gives them automatic Awesome Points) that I hoped would be enough for our 20 mile route.  I also brought another serving of Gatorade, just in case, but never ended up using it.  Since it's November, all the bathrooms and water fountains are shut down along the Lakefront Path.  Only the water trough at Diversey and the inner path remains on all year, so we planned to run by it on our way back in case we needed a refill.

Since it was sufficiently chilly, I only lightly sipped on my drink and never felt thirsty until we were about home free.

The legs were moving rapidly, especially considering the distance we planned to cover.  I was running more like I was out for a 10 miler, or shorter, not 20.  But, it felt good and relaxed and before long we were reaching the turn around.  Geof's Suunto is unfortunately fairly unreliable (for the very purpose the model is made for...GPS), so we were questioning it's mileage count and decided to run another mile just in case.  This allowed us to run through the Loyola campus, along the water and then some.  It's fun to run through that campus, it's gorgeous.

Once we turned it around, we were very happy to find that the wind (which had changed direction a number of times) wasn't going to be much of a factor on the way back.  I ate the rest of my Honey Stingers somewhere around here and had my second and final S!Cap of the day.  I was feeling great!  I had forgotten how different things are once the temperature drops.  Nutrition and hydration change a good deal for me.

I could feel my patellar tendon on both sides beginning to protest all the pavement and I was reminded I need to keep up with the glute exercises I was given by the good doc.  I also noticed my left ankle doing something funky, so I know my form was starting to get sloppy around 15 or so miles.  Par for the course!  I had no idea what pace we were running, but it still felt pretty brisk.  I had long since peeled off my wind layer and had it tied around my waist and I was glad i decided against the gloves.

As we neared the turnoff to get to the water trough, I was trying to decide if I needed more water, and, ultimately, going for it.  This added more onto our mileage, but was worth it.  I got thirrrrsty as soon as I saw the trough :)  Ah, the power of suggestion!  I fixed the top lacing on my left shoe so it didn't rub my ankle anymore and this felt glorious.  As we headed back out after a short walking break, my legs stiffened up.  Geez, you'd think this was my first long run ever.  I felt like such a newbie ;)

I was pretty ready to be done with only a couple miles left.  We picked up the pace and almost seemingly out of nowhere we reached our end point.  Ahhhhhh, yes!  There's a short flight of stairs down to the tunnel to get under Lake Shore Drive, and my knees felt incredibly wobbly and out of sorts as we walked the short bit back home, but boy did it feel good to have that run under the belt now.  I felt like I put a lot out there and was pretty depleted when we finished, and that feels good.  I don't do that very often :)

We were pretty curious about our route, so I pulled up trusty MapMyRun to check our route.  It was a lovely 21.5 miles, and I didn't bother adding in the Diversey water trough section as it's pretty tedious work, mapping out the route, so it was actually more than that, but who's counting :-)  Combined with our running time, it came to a 9:11 pace.  No wonder I was spent!  I'm used to doing my 20+ mile runs at something closer to 10s or 10:30s.  BAM!  The best part was how good it felt most of the time.  How I felt reminded me a lot of the section of Rio Del Lago from miles 45 to 67, when I felt like I could run forever and ever.  These are times we need to package up and hold onto for runs to come.  They are a good reminder of how good it can be out there.

Lots of ice, water and foam rolling was in order after this one.  It was great to feel so exhausted from a solid effort.

This morning it felt like someone punched me in the feet, hips and glutes, and my calves were tight like guitar strings :)

These are the runs we live for...

On to the next!

Great Rio del Lago pic in Ultrarunning Mag. You look fabulous out there in your jazzy skirt!!