There's a New Shoe in Town

But first, a totally unrelated tidbit:

I looked at the calendar today and realized it's November...wow, where does time go?!  I've been hard at work (not really, but sorta, for me anyway) revamping the ol' eating habits and working towards something more sustainable.  Geof and I are on board for a nice little overhaul and it's actually pretty exciting making changes, and being able to do it together.  We've been watching a lot of food documentaries lately and our whole outlook on the food we eat has changed dramatically.  I never thought that would happen!  (No, we're not giving up meat, that would be silly for us...chicken and sushi are staples!)  Not that we were bad eaters to begin with, but we certainly haven't been very mindful of the food we eat.  No longer!  It's fun to try new foods and actually cook stuff...but let's not get all crazy here and start spreading rumors about me wielding pots and pans and forming anything resembling "edible".  But, somehow, between Geof and I, we've managed to put together a number of very successful and delicious meals of late.  How fun!

But enough of that, what about that running problem of mine?

It's my slow season (ha! no pun intended)...ultrarunning doesn't really go out of season, but I choose to get back to basics during the colder, winter months.  Same mileage as always, but little to no racing...it's hard to reduce my already low mileage :)  Lots of strength training and core work.  Some cross-training, some shoe experimentation, some glutenous eating, some hoppy beverages, prancing around in my fleece lined running tights (doesn't every runner do that?) and lots of rosey, windburned cheeks and tingley un-gloved fingertips.

Yesterday, a handful of us CHUGgies met up at Poplar Creek (in Streamwood, IL) for a group run.  Brelly ran a loop but had family stuff afterwards, Deanna contemplated another loop but a touch of a cold kept her from joining us again, so Geof, Leslie and I headed out for a second loop.  Leslie and I had run the first loop together way up front and since neither of us are actually familiar with the trails there (even though I've run there a couple times...it's confusing, okay!) we ended up getting a little...turned around :)  Oops.  The 6.75 mile loop turned into 9.5, yippee!  We were crankin' it for a long run, and I was pleased with how everything was holding up.  It was cold as balls (read: approximately 31) and windy whenever we came out of the shelter of the woods, but we kept on keepin' on.  After 16.5 miles, Geof and I called it a day and Leslie left for one more loop.  I opted to take my newest Sporties (La Sportiva Crosslites) for their first run and was very, very happy with how it went.  I felt a little bit like I was cheating on my Sporty Cats, but since they are practically siblings there was no harm done :-)  I think I shall call them my Sporty Lites, it only makes sense. 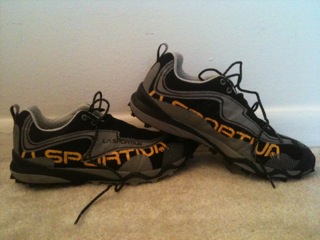 These are THE Sporty Lites, not some stock photo :)﻿
Here's the lowdown on the Sporty Lites...they are great.  They are technically minimalist trail shoes but still have some of the bulk I enjoy around the foot (i.e. fatty lugs and some decent cushioning).  They felt awesome!  There's a built in debris shield that covers the laces and while it makes it hard to adjust the laces, it sure does a great job of keeping the crap out.  There is some sort of rock shield on the bottom, but it's not much.  I could feel the larger gravel through the shoes, but certainly not enough that it caused any discomfort...I could just tell it was there.  These shoes fit like a glove, and that's how they're supposed to.  The forefoot is just wide enough for my foot and allows my toes to do their thing...whatever that is.  I got them a full euro size down from my Sporty Cats because they are kind of like trail racing flats, but with killer lugs, so they need to fit a tad snugger.  That said, I am a big fan of socks and the only kind that work with these shoes are the Drymax Hyper Thin Running Socks, which is great as I finally get to put these socks to good use (and not just as post-run kick-around socks).

I'm not gonna lie, I felt a little like a speed demon in these.  Actual performace may not reflect said speed demon feeling, but it was fun :)  So if you're looking for something wicked fast, and not overly built-up, I suggest giving these babies a try.  Wilderness Running Company is the only place I'd buy 'em from, but that's just my humble opinion.

Speaking of shoes, I've finally taken the next step in the Purging of Unnecessary Things Game at home: I've placed a couple pair of old running shoes in line for donation.  This was hard as they include the Cascadias I ran my first 50 miler in and a pair of road shoes that have seen some of the coolest scenery yet (Badwater, Leadville, etc.)...siiiiiigh.  But, it's time; enough is enough!  Feels good to shed some 'weight' from the ol' closet.

Tonight is raw fish night, aka sushi, with some of the Badwater crew and I'm really looking forward to it all!

I really like the way La Sportivas look now; good to hear they're enjoyable to run in as well.

Aw, shucks Paige. Thanks for the kind words about WRC and glad to hear the Crosslites made a good first impression.