I almost wasn't going to write anything about this because we didn't run the entire race, but then I decided there were too many good pictures to go without a post :)
This past Saturday was the very first running the Horseriders 34M Fat Ass run, put on by Brian Gaines/New Leaf Ultra Runs.  The day turned out to be BEAUTIFUL which made for fun hanging out, but the recent heavy rains left the course supremely muddy and gucky (yea, I made that word up).  Think: McNaughton Park.  With horse poop.
The standing water on the course was so prevalent that attempting to get around it (futile) or avoid a full on dunk was totally useless.  Geof and I gave in to this immediately and reveled in running straight through all the big puddles (i.e. small lakes) that took up much of the single track loop.  There was once doozy of a pond near Schaumburg Road, however, that a brief jaunt along the road allowed you to avoid, thankfully.  We steered clear of that one solely for hygiene purposes...it was murky, and thick.  I had no interest in tearing through a standing cesspool of equine waste.  Ick!  Suffice it to say, our feet were soaked within the first 1/4 mile, and stayed that way.  Gotta love the essence of horse pee and rainwater on your favorite trail shoes ;)
The first couple o' loops (of 6.75 miles, run 5 times, for 34 miles) went by just fine, and pretty swiftly.  We were moving well, especially considering our exceedingly slow recovery post BQ marathon.  Then on the third loop, we both began to deteriorate almost out of nowhere.  It was as if our bodies said, "okay, that's it!"  My entire left leg began to ache and tighten up from my hip to my knee.  I could literally feel my IT band turning into a knot, and pulling my kneecap outward.  Owie!  I'm not sure what the dilly was, but I decided it was probably a good idea to call it a day early.  So when we pulled into the pavilion after our third loop, and 20+ miles, I checked out almost completely.  Until, of course, Geof convinced me to try one more loop.  Oooohhhhh, fiiiiiiine :)  We made it a mile in when we both suddenly decided it just wasn't worth it.  Not this day, not this race.  We ran/walked the remainder of the brown trail (2.5 miles) and cut back to the pavilion instead of continuing onto the yellow trail.  Good decision!  With about 22.5 miles in the bag for the day (and longest run in three weeks by A LOT) we were very happy to change into dry clothes, pull up a chair and kick back with some cold beverages while enjoying the warm sun and awesome company.
So, that was our day.  The best part was hanging out at the pavilion watching runners come and go.  I think there were more of us hanging out than there were actually running :)  Here are a few pics from the day (thanks to Kelly Gaines!) for your viewing excitement: 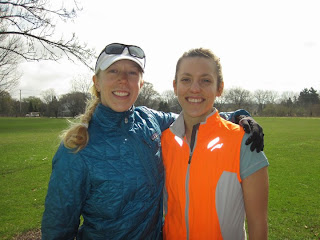 Me and Leslie, before the start 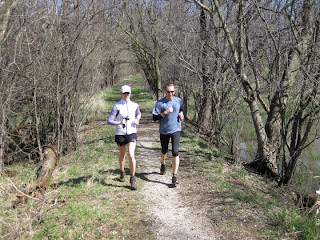 Geof and I on the black trail connector, Loop 1 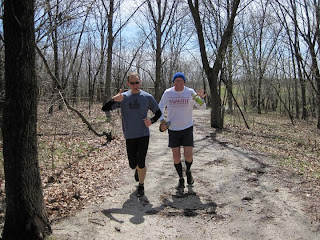 Geof and Ed kickin' it 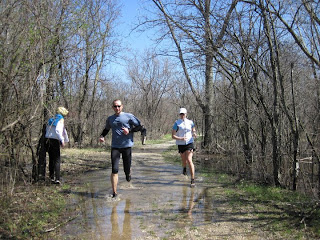 One of the gajillion﻿ pools of water to run through.  That poor woman on the left...I think Geof soaked her when we passed her ;) 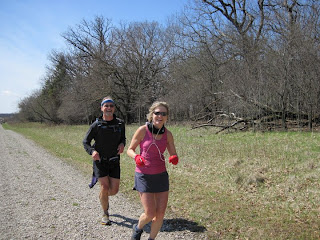 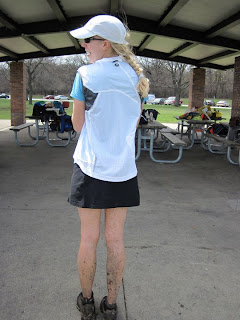 I was so close to winning the Muddiest award (the picture doesn't quite capture it enough)... 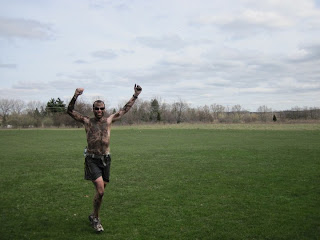 ...but then Scott appeared and TOTALLY showed me up!  He wanted the Muddiest award so bad that he literally bathed in a mud puddle, LOL!!  Kudos to you, man! 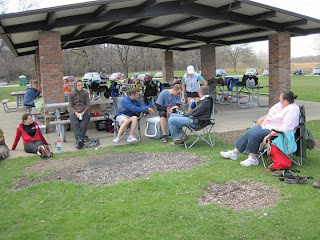 Chillin' like villains in the pavilion at the start/finish 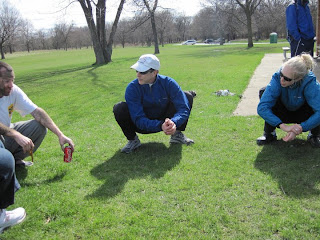 ﻿Afterward, I noticed what a killer Third World Squat Scott had (on the far left) and a few of us decided to try it out and see how we did.  It's very comfy, and way harder than it looks!
Ooo!  Before I forget, if you're looking for a new mp3 player, or just love keeping up on techie stuff, my dear, dear Blogger friend, Gretchen, is giving away two Sony Walkman mp3 players on her blog.  Check it out HERE to find out how to enter to win one of two music players!
Paige, out.
Posted by Paige at 11:47 AM

Looks and sounds like everyone had a great time, can't wait to join in the Fat Ass fun!

Looks like muddy fun! Apparently you needed to swim in it to win the mud award, though. ;)

Okay, I canNOT believe that squat is called the "Third-World Squat." The reference, geez!

Right @Meghan?! I don't make these things up. I read the article that I linked up here a few months back and was surprised by the name. The article is very interesting and fairly informative, though. If you're into ready about stuff like squatting :-)

@Kovas, hopefully you can make it to the Sunburn 6/12 Hour runs in July...going to be such fun!!

Great post Paige. Funny I never thought about the "standing cesspool of equine waste" I went through 5 times, lol. You have a great way with words. Enjoyed seeing you and Geof as always.

Thanks, EB! Great job on your finish!