Running is My Alibi

That's pretty much the skinny for the next few weeks.  It's October (holy eff!) and we're in the midst of Week 11 of JJ100 training.  It's coming along quite nicely.  Last Saturday, we headed up to the Kettle Moraine once again for our long run, and to get some much needed kicking-around in.

It was a kickass 25 miles of...kickassness.  The weather was perfect, the sun was out, the trail was semi-soft from the recent downpours, but not wet, lots of dogs towards the end of the run.  Everything was clicking, and things felt great.  I wore my newest trail shoes, La Sportiva Quantums, for the entire run and they totally rocked.  I brought along my Sporty Cats just in case as figured I would need to change into them at the 16 mile mark (when we returned to the truck for a re-supply), but the Quantums were too busy blowing my mind!  Not a single hot spot, not a single complaint.  Very, very impressed.  We started a little late, and, judging by the large number of vehicles in the parking lot, figured we'd see a lot of folks on the trails, but we had it pretty much to ourselves for the first 16 miles.  Other than the lone hunter standing on the side of the Ice Age Trail, holding his shotgun across his chest as we ran by, staring up into the canopy above.  That was a little bit creepy...

Per tradition, we headed straight for the La Grange General Store for lunch afterward.  I was particularly jazzed about our run that day.  My legs didn't feel like I'd run anything until about mile 21, then it just felt like it usually does after our faster T10s.  Finishing up the run, and the rest of the day, I hardly felt like we had done anything.  Fresh as a daisy!  So that's a good thing and a bad thing...good because it means I'm adapting well and ready for more, and bad because it means I could have a) gone longer, or b) gone faster :)  In any event, the run was awesome!

After we shoveled our lunch, and traditional post-run brewsky, we headed down to Woodstock, IL to play in an apple orchard, gorge on apply pie, hot apply cider and hot cider donuts at All Seasons Orchard.  It was the perfect day for picking honey crisp apples.  After we bagged our booty, we hiked back to the orchard kitchen for more donuts before heading out to find the adorable town square in Woodstock.  Supposedly, Groundhog Day was filmed there...  We are suckers for really cute town squares :)  On a whim, we decided to duck into the local pub, Woodstock Public House, for some hot soup and people watching.  Everyone knew everyone, and they were all so darn happy!  Great way to finish off a great day. 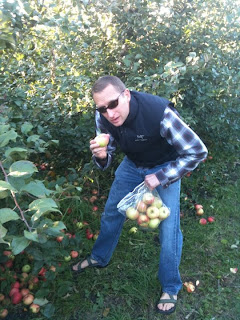 It's Geoffrey Appleseed!  I caught him mid-pick...
Anywho, it was a successful Saturday!  And some of those honey crisp apples quickly became an apple crisp on Sunday.  Talk about success, if I do say so myself!

This week is my highest (non-race) mileage week for JJ100 training.  Last week I hit my highest weekly (non-race) mileage ever, and this week will top even that.  Lots of PRs this year, heh.  I'm pretty excited, and looking forward to a 32 miler on Saturday.  Next week is a step back week, followed by one more high mileage week (including a 50 mile race) before the taper begins.  Can you believe it, only 5.5 weeks left?  Where has time gone?!

The creeky-sore muscles have become the norm, and a thin veil of exhaustion has swept over me this week.  Signs of hard work :)  You know you're doing something when you wake up each morning having to shake out the rigor mortis in your lower half.  Next week's step-back will be welcomed with open arms, and lots of ice packs.

I showed up to the party late - can I ask what your training schedule looks like? (I'm sure there's a post somewhere around here I'm unable to find heh!)

Good luck on your upcoming races!

Hi Elizabeth Jayne! I never actually did post my training schedule anywhere here. It's a rather long and involved spreadsheet that's probably of little use to most, lol :)

Hope that helps some. Thanks for stopping by!