I feel like I have partially emerged from a long hibernation, observing the world through a clouded mind and creaky body.  Smells are all new, flavors unfamiliar, light…so bright.  But, alas, I've simply emerged from the most intense 4 weeks of my entire education.  My head is filled with so much information and knowledge I surely thought it would spill out as soon as exams were done.  But it's still in there, thankfully :)

And so, it was time to celebrate! 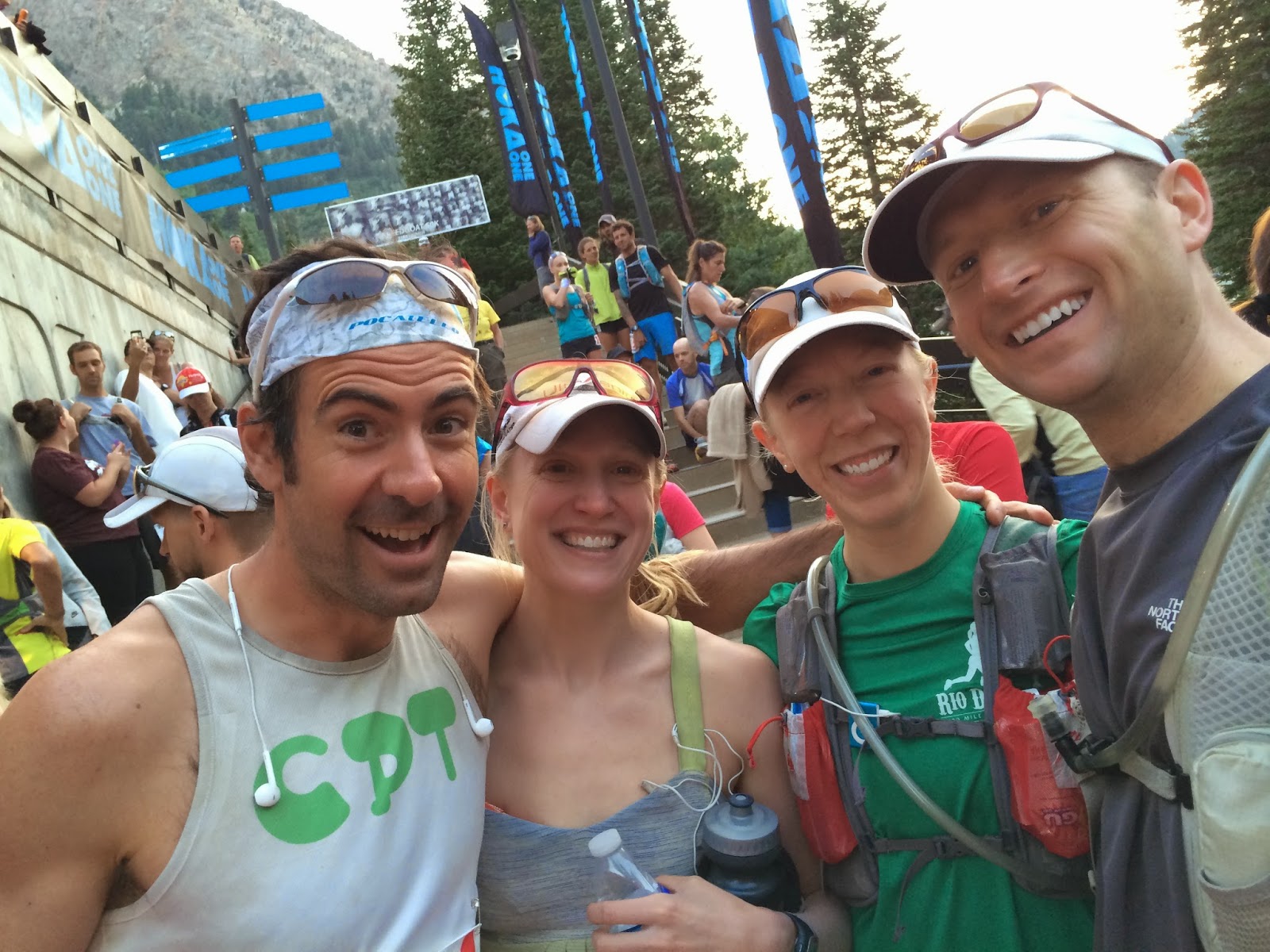 With the Drs. Lewis and my G…pre-race smiles!

The 2014 Speedgoat 50k was my celebratory dance for surviving the juggernaut of my summer semester.  And celebrate I did.  If by 'celebration' you mean eat a lot of popsicles, drink a lot of warm Coke, and consume enough Gu to make me gaggy :)

This year's race took it up a notch.  Some course changes were in order and Karl certainly didn't hold back when re-routing the final few miles.  He originally stated it would be about 250-300 feet of additional vert added at the end, but my Garmin would say otherwise…  I think he had his fingers crossed behind his back when he said that ;)  The day would prove to be exceptionally warm with full sun all day long (quite the contrast to last year's race!), and an absolutely brutal final few miles.  But, of course, it was astonishingly beautiful.  The wildflowers were out en masse and I couldn't help but smile just about every step of the way.  I kept thinking,"I am so freaking lucky to live here.  I get to do this!"

That said, it was hard!  I finished just over an hour slower than last year, and that seemed to be the case for most everyone else, across the board.  I recorded over 11,500 feet of vertical climbing (and an equal amount of descent) in just over 33 miles.  The new ending boasted 4 new smaller climbs and barely even the suggestion of a trail…just little blue flags to follow.  At the end of a long and tough day, it was a little demoralizing, but at the same time it made me hungry.  In the same thought I said to myself, 'eff you, Karl, eff you…' and then, 'bring it on!'  Then I laughed at the crazy.  Then I laughed because I realized that I think of the weirdest things during races.

Easily, the hardest race I have ever done, even The Bear.  I love races like this because they put everything into perspective.  If I can do that, I can do anything.  Speedgoat makes me feel like a real mountain runner, and watching Speedgoaters finish is very close to watching Hardrockers finish.  I can't get enough of it.

So the day started out as any other race day, and continued on that way for me.  Geof and I ran our own races this time, just as we did last year.  I think overall I felt really good all day long.  There were never really any high highs and certainly not any lows.  Just a lot of evenness.  Which was weird, and cool.  I listened to music on the climbs; it helped me get and maintain a good cadence so that I could just power up rather than dilly dally.  The climbs were the only points at which I actually passed people.  I yucked it up on the downhills as they just aren't my strong suit to begin with, and then add in unstable footing, super steep terrain, and lots of rocks, and I'm pussyfooting it all the way down.  Better safe than sorry!  So I resolved to kick it into gear on the climbs to make up for what I lost on the downs.

Once I realized I wasn't even going to match my time from last year, I cut myself some slack.  I took quick breaks in the shade when it was convenient, I eased up on my pace, put ice in my bra, and I gave myself permission to just enjoy the day.  I never realized I needed permission to do that, but yesterday I did, and it was fabulous once I granted it.

You know what else was fabulous?  The salted watermelon flavored Gu that I ate.  It was like eating a watermelon Jolly Rancher, and I love those!

It's funny how when you have a really even keel kind of day there isn't really much to report on.  I feel about as beat up as I have after any 100 miler, which is so weird.  My mind was all sorts of fuzzy today, and my appetite didn't return until about 6:30 this evening.  Um, hello, it was a dang 50k!  And I kind of love it.  I live in the sort of place where 33 miles can knock you flat, and then have you asking for more before you know it :)

As I very rhythmically made my way straight up the face of 11,067 ft. Mt. Baldy yesterday, my carotid arteries pulsating in my neck, my heart pounding in my ears, Coldplay's "Paradise" blasting through my ear buds, I couldn't think of anywhere else I'd rather be.  I felt like somehow I had arrived.  Often during hard times, especially races, I find myself wishing I were somewhere else, and then I miss out on all the awesome that surrounds me.  I let myself become consumed by the difficulty of the challenge.  Yesterday I embraced it and loved it for what it was.  Something that would make me tougher, make me more appreciative.  The face of Baldy is so steep that your heels don't touch the ground, it's a calf-burner.  As I neared the summit, I wobbled a little when I set my foot slightly askew of a rock and I reached out my right hand, setting it into a mound of dusty dirt and debris.  It was warm and stuck to my sweaty hand, and it was real.  I connected with what I was navigating.  And I smiled.

I guess that's what heat, a belly full of Gu, and sleep deprivation will do to you ;)

I rounded a switchback in the final descent down to the finish after a gal that I'd been running behind for quite some time cried uncle and asked me to pass her (she said I was making her work too hard and that she just wanted to walk :)), and came upon another gal picking her way down.  The trail opened up to a jeep road and I pulled up beside her and said hello.  She said 'good job', and I replied, 'don't just let me pass you, c'mon!'  She switched it into high gear and we battled it out, smiling, side by side down to the final straightaway.  My legs felt like rockets and I pulled ahead of her in the end.  I found her afterward and apologized (I felt a little bad), but she just smiled and said, "Thank you!  You made me work harder than I had all day; I needed that!"  What a good sport :)

After some thought, and a little bit of food, I'm pretty sure I'll be back again next year to test my mettle in the Wasatch once again.  For us mortals, it is not a race; it is a test of one's ability to just deal…taking those lemons and making some killer lemonade.  Speaking of which, I had the most amazing lemonade flavor popsicle at Larry's Hole AS2.  I made that sucker last all the way to the base of Baldy.  It was AMAZING.

I think I need to go and fix this whole sleep deprivation thing I've got going on ;)

Hi! I love your report! I have signed up for this race 4 times and not done it because of my fears. I have decided that I am going to do it this year, even if I get cut and can't finish it will be amazing.
I have a garmin and want to see if I can get your garmin route from last year. I want to upload it so that I can have something to track myself.
Are you on Garmin Connect? Would you mind sending it to me? I would be SOOOOO Grateful.
Annie

Thanks for reading! I haven't entered the world of Garmin Connect just yet and I never save my route info :-/ I think it's best going into this race route blind...just know it's a LOT of climb, a long day, and a LOT of beautiful fun! Have a great time, and I hope you enjoy it as much as I have :)