On the left side of the ring, we have the blonde battleship of butt-kicking, known in the ultra world as "that blonde chick", more commonly as "Crash", but more affectionately as "Pearls". She is a pearl-wearing ultrarunnah from H-E-double hockey sticks! She likes to start races...and finish them [the crowd goes crazy!]. She'll make even the most fashion-conscious diva feel like yesterdays bread on sale for 1/2 off at the checkout. (It's those pearls, ya know.) [the crowd really gets wild now!] 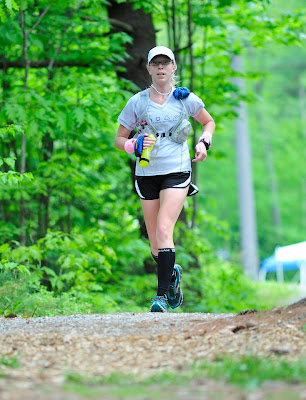 And now, on the right side of the ring we have the Irish enigma himself, the downhill runnah, also hailing from H-E-double hockey sticks...[crowd grumbles with anticipation...who could it be?!] some like to call him Vermont Mike, others like to call him the Idea Man, and still others refer to him simply as 'dumbass' (Jeremy, to be specific)! He likes to start races...and then not finish. He's a S!Cap poppin' sonofagun, a water bottle forgetting (oops, I locked my keys in the car!) DNF in the flesh! It's Chili Pepper Shorts! [crowd dies down when they realize it's just 'that guy'] [but wait, he's got the shorts on, so the crowd goes nuts again!!] 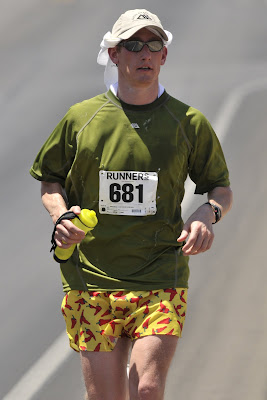 As you may, or may not know, Chili Pepper Shorts Mike has become one with the DNF as of late. While I know the man has it in him to actually finish a race that I'm not running alongside him in, I fear he is running low on the mojo to get him across that line.

Now, I also know our fabled Chili Pepper Shorts wearin' dude works best when he is presented with a bonafide challenge, a demoralizing blow to his chili pepper ego, a deep cut straight down to the core of his very being. My what magnificent timing this is. I recently caught wind of a little intel in the ultra world. Chili Pepper Shorts has signed over his life to none other than our beloved Andy Weinberg (two times in the same year, is he nuts?!), and will be taking on the Pittsfield Peaks Ultra Race, in the form of the brutally tough 53-miler. Can we say 13,122 feet of vertical? Can we say "not very runnable"? Can we say "masochistic"? Can we say "I met four people last weekend who said they'd never run the 53-miler ever again"? Clearly, this is a man on a mission! A man out to regain his title as a finisher of races!

Mike, I challenge...no, I DARE you to finish the Pittsfield Peaks 53-miler on June 6, 2009. Need a little incentive? If you start and actually finish the race (under the cut-off mind you) and it is confirmed by Mr. Weinberg, I will don the chili pepper shorts for my next race (photo documentation required). However (yes, there is another side to that coin), if you should fail and take home another DNF, you have to wear my pearls at your next race (photo documentation required). [the crowd roars, jumping to their feet! I think they want him to lose this bet!! Could it be?!]

You chicken? Or are you in? [the crowd says "ooooooo" in unison...suddenly, there is a chill in the air...Pearls dared Chili Pepper Shorts, this is unprecedented!]

[Rocky theme slowly fades out, and the screen fades to black]

Um, CHALLENGE ACCEPTED! I cannot believe you put me out there like that! You're going to love wearing my Chili Pepper Shorts - and they do have some sweat stains in the crotch :) Enjoy :)

My rebuttal is now officially posted to Polka Dot Shorts - though not as LONG WINDED as yours. I really love the challenge and extra motivation...so thank you!

As I like to say, "whatev", bring on the sweaty crotch.

I hope you can get used to the idea of running in pearls. It's a fabulous job, but somebody's got to do it.

Paige! Another classic. I loved it. You can pick up the trash and you can talk the trash. Well done.

H-to-the-ilarious! Awesome! I love these challenges. Crash, you need to give me updates while at Kettle. Good luck you too. This will be amusing no matter which way it ends up.

Cool!! Props to Pearls for issuing the challenge, and to Mr. Chili Pepper Shorts for accepting. Rock on, dudette and dude!

Yowza! I'll be at Pittsfield too. I hope to see you at the finish, Mr. Chili Pepper Shorts. I'll wear the peppers and the pearls if that's what it takes to get me through that course!