Here's a little peak into my non-running life (does such a thing exist?!)...My older brother, Tate, has a band called How Far to Austin and I just received their newsletter containing a link to a music video they made recently.

It's AWESOME!  I got goosebumps watching it, then I wanted to dance so I watched it again!  It's their version of Tina Turner's "Proud Mary" and it'll give you a pants party.

My brother is the guitarist, in flannel (how many of you were able to pick him out??).  He looks just like me so you can't miss him :)  Except I have a flatter set of abs currently (shhhhhh, this'll fire him up!) and he is quite a bit funnier.  I have much to learn about the written word from him. 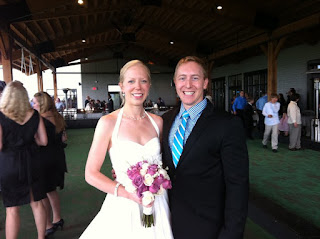 Me and my big brother
My sister-in-law, Katie, is the female vocalist.  She's got some serious chords.  My niece has some big shoes to fill!

Anywho, I was just so dang proud that I wanted to share it here.  I remember Tate's first electric guitar and watching him play the first few chords of some Jimmy Hendrix song over and over and over because I'm pretty sure that's all he knew how to play.  Now he's a bonafide Chicago rockstar.  Pretty neat.  Makes my running seem so...pedestrian :)

fun. like the name of the group. i used to do a lot in the Seattle area in the 90's with music scene up there.