"We run, not because we think it is doing us good, but because we enjoy it and cannot help ourselves...The more restricted our society and work become, the more necessary it will be to find some outlet for this craving for freedom...The human spirit is indomitable."
- Sir Roger Bannister
I did it! I finished my first half marathon. It certainly didn't come without it's trials and tribulations, though...

I remember sitting in the cushy blue lazyboy in my old apartment and announcing to my roommate that I was going to sign up for winter half marathon training, back in December. She laughed at me. The next day I signed up, and then the reality set in. Wait, I'm actually going to have to train for this!

The second weekend of February was my first training run with my group. I had just returned from a week of skiing in Colorado, and was about to close on my condo. Needless to say I was a tad stressed and a little intimidated by the training plan I had been given.
I made it through my first run, 5 miles, in the freezing cold on the lakefront path that was still covered in a thin layer of ice. It had snowed all week leading up to our first run, lucky us. It wasn't so bad though. I kind of enjoyed running with a group of people all working towards the same goal. The following week I stuck to my training plan, went for another group run, and got started renovating my condo. Such as it was for the next 4 weeks.

Around mid-March I was suddenly side-lined by an intense pain in my right shin and calf. I can't even begin to explain how much that sucked. I was so into my training and really started to rely on it as a means of stress relief from everything else that was going on around me. The pain was so bad that walking became taxing. I was crushed, and in a way I could have never imagined. I think it took me about a week to finally pull myself out of my slump and get proactive. Of course, the idea of going to see a doctor completely eluded me. Stationary bike, elliptical, cross-trainer, you name it I used it. I needed to keep my fitness up, but was taking time off from running. That turned into the longest 5 weeks of my life.

I changed my diet to include more fruits and vegetables, and began lifting 5 days/week. I actually felt great, and I wasn't even running! Finally, in the first week of June, I went to see a sports med doc because I was still getting pain in my shin. He told me I was wearing the wrong shoes, and that my hips are the weakest he's seen on someone with my level of fitness, and that my balance was almost non-existent. I was given a prescription for physical therapy, and told I could ease back into running. Woohoo!!!

Of course, me being the person I am, I didn't warm to the idea of PT at all. I researched hip-strenghtening exercises and balance training, and got to work on it myself. I joined Chicago Beer Runners and emersed myself in running once again. Easy does it? Not exactly.

I had sort of forgotten about my goal of finishing a half marathon before my birthday in September. But at least I was running again. Looking back (and glancing at my racing log) I've run more races this year than in any previous year, and the majority have been within the last 3 months! I've PR'd 4 times, placed in my age group, and improved my times by leaps and bounds. All this and I still was having issues with my shin.

I started getting a little worried (read: paranoid) about this come August and Mike was like the angel on my shoulder trying to get me to take it easy and get it checked out again. Of course, racing is the devil on the other shoulder saying, "Go longer! Do another one!" But, I finally decided to see Dr. N once more...just to make sure I didn't have a stress fracture. Long story short, I still have shin splints (now on the left side as well), and much to the surprise of my doc, no signs of fracturing or secondary injury. He couldn't believe I've put up with the pain for so long. I guess it just sort of becomes normal after awhile, crazy as it sounds.

Another prescription for PT and I'm actually going this time. I love it! My PT is a saint. I took two weeks off running before seeing her, and I was worried she was going to tell me to skip running the Chicago Half Marathon that weekend. But, much to my surprise, she told me to
go for it, take it easy, but to absolutely go for it...music to my ears.

Rushing to the starting line of the Banco Popular Chicago Half Marathon, I had my good friend and fellow Chicago Beer Runner, Brad, at my side. He was complaining about the massive downpour, and I was absolutely elated! He's a long distance race veteran though and this race was no biggie for him, but for me it was monumental. Nothing was going to dampen my spirit, not even the monsoon!

The first 4 miles were a pain in the rear since the field barely spread out, and people were dodging left and right to avoid massive puddles forming along the boulevards. Seriously, folks? It's raining like crazy and we're already soaked to the bone, what's a little puddle going to do? After 4 miles, Brad took off and I hit play on my iPod.

So happy :) I love running in the rain, always have. It makes me feel more accomplished when I'm done. On top of that it keeps me from taking a race too seriously, which was perfect because I needed to 'take it easy' this race. I felt great the entire time, even though my shoes were completely water-logged (imagine running on fully saturated sponges for 13 miles), my iPod only worked in one ear the majority of the time because water kept pooling in my ears, and my ponytail turned into a weapon of mass destruction once it became completely soaked, swaying back and forth and hitting me in the face. So much fun!! Honestly, I wouldn't change a thing about this race. It can only get better from here.

The miles flew by with the distraction of the rain and the cheering crowds along the entire course, and before I knew it I was at mile 10 and suddenly spurred on by an intense second wind. Not once did my shins bother me! I stopped at every water stop, after the first 4 miles, for gatorade, and every 2 miles I stopped to stretch my hip flexors and calves. I never once felt winded or tired. My lungs felt fresh, my legs felt light and agile. My hips flexors were very sore by the end of it though. I think this was due to the fact that I was actually concentrating on my gait and making sure I didn't let my knees collapse inwards on impact once I got further into the race and began to fatigue.

Woohoo!! Finish line!!! Warm, dry clothes, cookies, finisher medals!! Coming down the straightaway, with the "FINISH" sign in sight, I kicked it up a notch and with the energy of the cheering crowds and people screaming your name as you passed (our names were in large print on our bibs), and hardly being able to contain my own excitement of having achieved my goal, finally!

But first, I wanted my dang swag!

Check out that bling bling, and the Atayne Performance Shirt. Ahh, finally, my very first finisher medal. I plan to add many, MANY more to that collection. A fellow Beer Runner that was there to support Brad and I called it our "special necklace". Indeed. 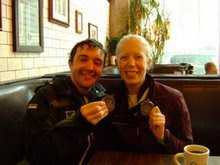 Standing in a ginormous puddle for what felt like eons, we finally spotted Brad, and we made our way to brunch at Eleven, on Wabash in the south loop. Delicious! We refueled on egg skillets and potatoes, and of course, we needed to rehydrate... 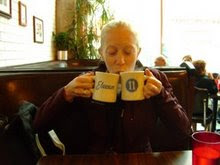 As soon as I got home I made myself a nice little ice bath and hopped in! I could have used a great deal more ice (Jeremy says 2 bags...I only had 6 trays), but it did the job. It was only my first ice bath, so next time it'll be better. Lots more coffee, some congratulations from my number one fan, Mike :) and one movie later, I was completely exhausted.

Great day, great race. Can't wait for the next one!
Paige, out.
"Running is a big question mark that's there each and every day. It asks you, 'Are you going to be a wimp or are you going to be strong today?'"
- Peter Maher, Olympian/sub-2:12 marathoner
Posted by Paige at 9:34 AM