One Foot In Front of the Other

“We should come home from adventures, and perils, and discoveries every day with new experience and character.” ~Henry David Thoreau 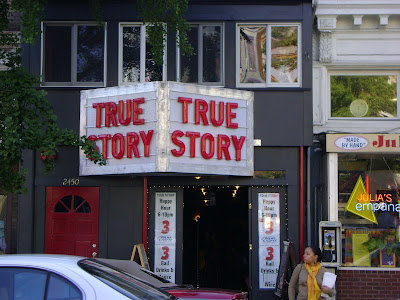 Running is a somewhat selfish sport. A great indulgence, if you will. Something we do to either make ourselves healthy, blow off some steam, hit a PR, and in turn inflate the running ego a bit :) Placing in your age group (or, for the lucky few, overall) is a major ego boost! Running can be a personal struggle for some, a personal achievement for others, a way to prove that you can surmount the insurmountable. Point being, it's not very often that we do it for someone else.
That being said, when I heard about Tommy Neeson and his 4 Millions Steps I had to be a part of it. Basically, Tommy has embarked on a 2300 mile journey from Maine to Florida in order to help raise money for the Ronald McDonald House Charities. Check out his website to read up on his story, it's an amazing one. So here's this guy who's giving up months of his life, to run, raise money, and spread the word. He's barely getting anything out of it. His own running sponsor didn't even give him anything for this journey! Talk about selfless.
When Mike mentioned that he would be running with Tommy when he came through D.C., and asked me to join them, I was thrilled. Of course! How often do you meet, and run with someone who's doing something like this? Well, pretty much never. So, plane ticket in hand, Atayne shirt and running shoes packed, and I was off to D.C.
I hadn't been to D.C. since I was a congressional intern waaaaaaay back in 2003, and I fell in love with the place so I was pretty darn excited to go back. A nice, half-full flight, and 2 hours later on a Friday night I was sitting on a bench in the Baltimore-Washington Airport awaiting Mike's flight. We managed to work it out so that we were both flying in ridiculously late...I totally beat him in though (LAX is a soul-sucking airport, and he had to deal with it and all it's mood swings that night, so his flight was delayed). No worries, I was busy finishing up The Last American Man (which I highly recommend everybody who loves the outdoors even just a little bit reads it). A few hours later, we reached Mike and Jeremy's house...aptly nicknamed Camp Atayne. Yes, BWI airport is technically only 40 minutes away, but we took the scenic (some might say "long") route all the way around 495 (seriously, why does that highway go in one ginormous circle...didn't the engineers know that the shortest distance between two points is a straight line?). Our little 495 adventure granted us a whole 4 hours of sleep!
I think it was around 8:30 when we finally got headed out the door to go meet Atayne friend, Andrew, and then head to the Falls Church, VA Ronald McDonald House to meet up with Tommy, and members of the George Mason track team. 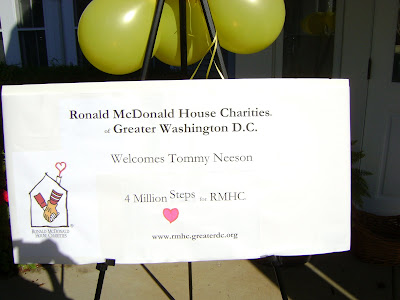 Tommy's been averaging something like 30-35 miles per day since he started his trek down the eastern seaboard, but this day was going to be a "low mileage" day of just 21 miles. We signed on to run about 16 each and to make sure that Tommy didn't have to push his "house on wheels" (a stroller that was retro-fitted to carry everything Tommy would need for the next 75 or so days, that thing was packed!). I had no idea what I was getting into...
Jeremy and Mike testing out the house on wheels... 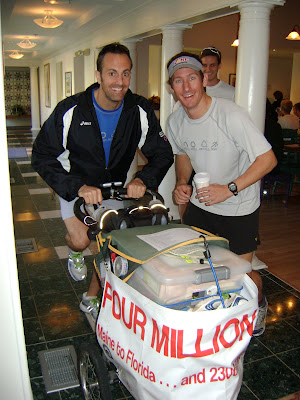 After some fuel and chit chat at the RM house, we headed out for some group pictures, and then hit the road!
Tommy, house on wheels, and Ron... 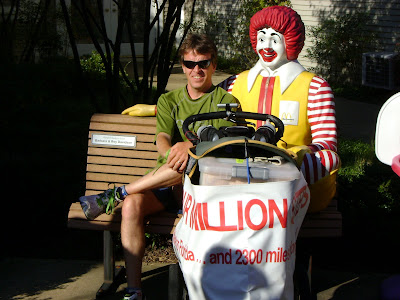 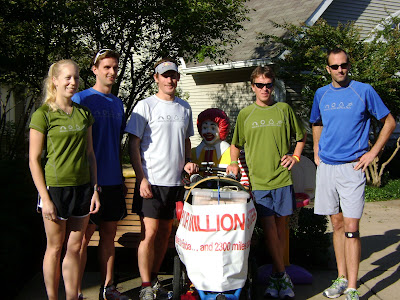 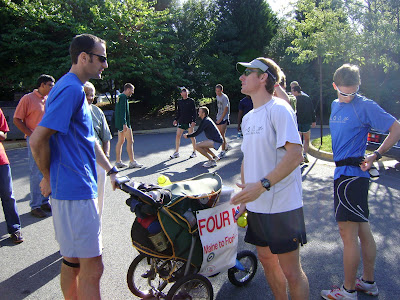 Strategizing...
Let me start off by saying the hills of northern Virginia are nothing to scoff at. I thought my lungs were going to burst out of my chest. Thank goodness we were maintaining a "slow" pace (8:30's). Don't get me wrong, I was having a blast. The scenery was amazing, the company was top notch, and the experience was one of a kind. But I thought I was going to die. At least if I did, it would have been while running! So, I started to slow a bit around mile 6ish, or 7. Depends on which GPS you happened to glance at. Jeremy was pushing the stroller, Tommy was cranking it out and the lot of the GM track team had already filtered out for the most part. Mike was doing really well, and totally stoked because he'd finally gotten back his running mojo :) A big move, and constant travelling can take a serious toll on one's desire to run, so I was thrilled to see him so happy to be running again. I still felt like I was going to die.
I was wearing my Camelbak and it was rubbing my neck again, and since I was already a little uncomfortable from all the hills, that was starting to really freakin' irritate me. It was getting hot out, we were running along major highways, and the hills were laughing at me. Needless to say, when we reached 7.45 miles and Jeremy pointed me in the direction of coffee and food, I wanted to cry tears of joy. Note: Mike, being the stellar guy he is, kept with me the whole time even though he totally could have been trucking along with the other guys up ahead, and he stopped along with me at that oasis known as Einstein Bagels. I think the biggest issue, aside from the hills, was I hit a wall. I needed food. I scarffed half an egg and turkey sausage sandwich, and a chocolate milk, then we needed to figure out how we were going to get back to Woodridge, VA to meet up with the crew at mile 16. We had no cell phones on us, and pretty much no idea where we were. And then, we found a pay phone. A PAY PHONE! I haven't even seen one of those since I was a small child! Mike was brave enough to touch it and make the call to a cab company, bless his heart.
That was one of the longest, most out of the way cab rides in my experience. Somehow it took the cabbie 20 minutes and 12 miles to go 7 miles...not sure how that worked out, but okay. We make it to the parking lot of mile 16 and waited for Tommy, Jeremy and Andrew to show up. Somehow we managed to pull all this off without a hitch, we couldn't believe it. So when the guys finally got there, I was feeling like a million bucks, and Mike wanted to finish out the remaining 5 miles with Tommy so he wouldn't have to push the stroller at all. I left my pak with Jeremy, we all downed some Gatorade, and then Tommy, Mike and I were off to finish his mileage for the day, and Jeremy would meet us at our finishing point.
It was awesome!!! I just needed some fueling (and a break from the rolling hills). I got to chat some with Tommy, and he gave some good pointers for ultra running, told some wild stories, and I learned a lot about his experiences on his trek thus far. This man has been through a lot, and met a lot of really amazing people along the way, I was honored to be there and be a small part of it. The hills on this last portion were mere ant hills compared to the ones earlier, and I felt so much better. Mike pushed the stroller the entire time and we managed to make it to the Dale City McDonald's unscathed, but completely exhausted. Tommy said he'd never been so happy to see those golden arches! Ditto.
I learned where the hot spots are on my feet, and could feel the blisters, but other than that I felt really good. I'm so glad I decided to jump back in and finish out the day with these guys. In all, Mike and I did about 12.5 miles. The toughest 12.5 I've done thus far, mind you. But it was so worth it. For the first time in awhile running was for someone other than myself, and that felt great. I went into it not looking to gain anything from it, but came out of it having gained a great deal...met a really amazing person, gained a great deal of respect for the hills, and further reinforcement of why it is I love running so much. It will take you to places you wouldn't normally go, introduce you to people you wouldn't normally meet, and have you doing things you wouldn't normally do. What's not to love about that?
Mike and Jeremy fueling up after a tough run... 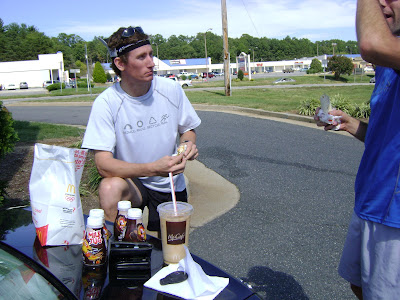 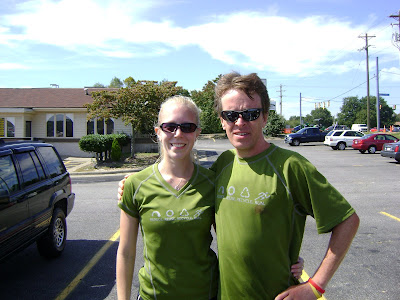 So what do you do after a day of running, hardly any sleep and an upcoming birthday to celebrate...? 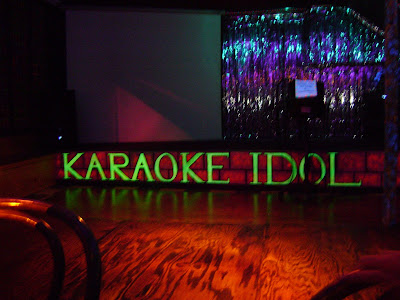 Karaoke!!! My first time, and I think Jeremy and I really brought down the house when we belted out our best "I've Got You Babe" a la Sonny and Cher. Wow, thank goodness I'm really comfortable in my skin, and practically immune to embarassment. I say, whatev :)
Of course, since D.C. is so fabulous, we had to do some sightseeing. Mike and I hopped on some bikes and rode the Custis Trail into Georgetown, hit up the local running store to check out the goods, roamed the streets, ducked inside Patagonia to glance at the wares, and then had some really good mexican along the Potomac River. Then we found this cool trail along a waterway... 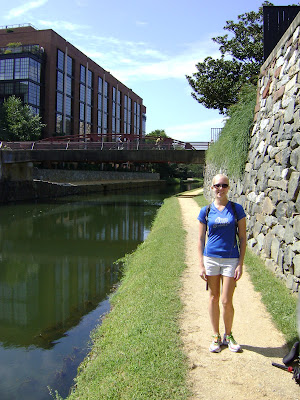 Checked out a small house... 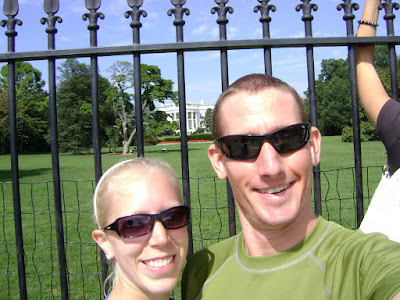 And a really tall stick in the ground... 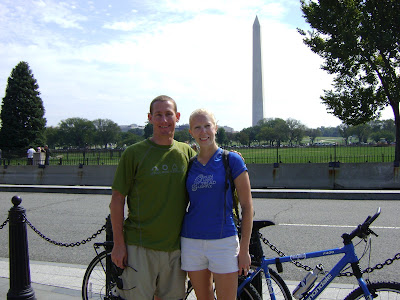 Then Jeremy picked us up and we headed into Adams Morgan for the guys to get the Atayne logo forever emblazoned on their bodies. The tattoos turned out so good! I took pictures, but they're on Mike's camera so I have no proof, but trust me they look awesome.

I thought this was funny, so I snapped a quick pic...nice legs... 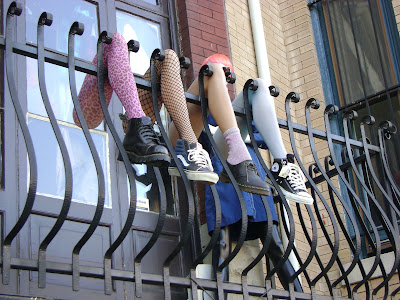 Ahhh, so it was a great trip. Tommy's a great guy, and I'm looking forward to see how things go for him on his journey. It's encouraging to see people doing great things, and thinking of someone other than themselves. It is a great reminder that we aren't the only ones on this earth, that there are things bigger than ourselves.

“I see my path, but I don't know where it leads. Not knowing where I'm going is what inspires me to travel it.” ~Rosalia de Castro