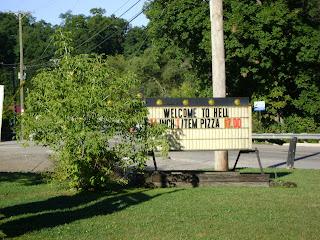 When you imagine hell, what comes to mind? I'm sure most of us can come up with a pretty imaginative response for that. Well, Mike and I made our first trek into Hell last weekend, and ya know what, it wasn't all it's cracked up to be.

The weather was absolutely perfect, sunny, mid-60's temp's, nary a cloud in the sky! When we woke up around 4:45 a.m., it was certainly cold as hell, and by the time we started heading out of town, it was hotter than hell! Okay, I had to, couldn't resist...

So anyhow, we began our journey to Hell, Michigan on Friday afternoon so that we could get there in time for Mike to pick up his packet and bib number for the Dances with Dirt 50k ultra marathon. Nice drive over yonder, except that we soon discovered that when we decided to grab coffee once we got on the road and out of the city we made a grave mistake. It appeared as though Indiana and Michigan don't believe in serving tasty coffee! What?! Since when can someone drive down the highway for more than a few miles without seeing a Starbuck's logo plastered on the "Food this Exit" signs? We're no coffee snobs, but sometimes you need something a little stronger than the usual watered down variety found at a gas station...especially when you have four more hours ahead of you on the road, in pouring rain.

Needless to say, when we got to Jackson, Michigan we were delirious with excitement over seeing that iconic logo on the exit sign. It's a good thing because it was my turn to drive. I believe what Mike said was, "you already drive like an old lady, I can't imagine what you're going to drive like when you're 80!"

Anyhow, we made it to Hell, convinced the Dirt Diva to sell us a parking pass and to retrieve all the items that were in Mike's packet...in Virginia (he forgot to set it aside before moving across the country)...and found our campground on the nifty map. We picked our site, got some firewood and I got to work on the tent...please note this was my first camping trip. 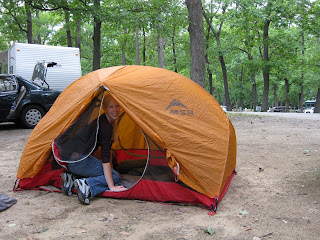 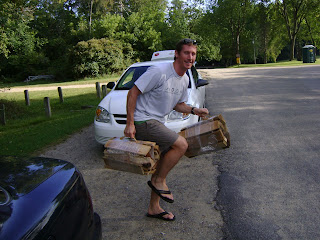 Then we decided to Trash our tent... 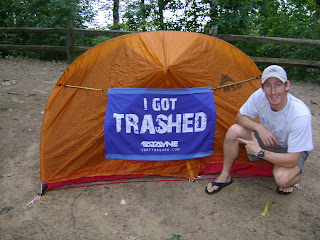 We carbo-loaded on pasta of sorts, and beer. Mike made a fire, I watched. We met a really cool couple who were using the 50k race as a training run for a 50-miler coming up...they looked like a couple of pro's. Super-nice people.

Over the course of the next 36 or so hours, we met some really great people. The running community, particularly ultra runners, is a really friendly and incredibly open and welcome community. It's very inspiring to be around people like that and to be surrounded by others who are as passionate about running as you are. While I was not all that thrilled about not being able to run that weekend due to my shin splints, I was really happy to be there supporting Mike in his first ultra, and loved the sense of community and absolute excitement that was in the air. Pretty darn cool. Makes you want to drop everything and run with them!

From our campground at Bruin Lake, it was about a 10 minute drive to the starting line at Half Moon Lake Beach. We made it literally 2 minutes before the gun went off, and it was pitch black out still... 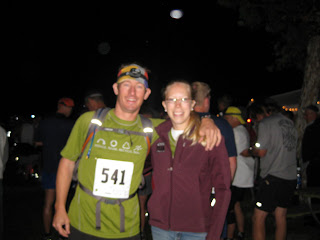 Ah well, at least we made it! All ultra runners had to begin the race with a headlamp. Mike wore his the first 45 minutes of the race, it was that dark still. That's hardcore. I hopped in my car and started heading to Hell Creek Ranch for the first aid station where I could get Mike a change of clothes/shoes if needed, refill water bottles, and feed him! 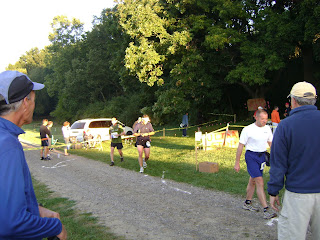 There he is! I think this was just around mile 4, so nothing really needed at his point. One more out and back would bring the runners back to the Ranch, and then they'd be heading off for the 4th leg, aptly named "Styx, River of Death", which would involve four river crossings and the final 1/4 mile or so running up stream in knee-deep water...action shot! We were now officially in Hell, city proper. 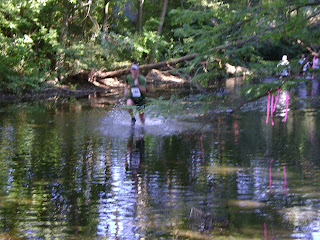 At the top of the hill just beyond the river, a man dressed as the devil waited for the runners, soaked and panting, thankful for the aid station at mile 18.7, and greeted each one with, "Welcome to Hell, I've been waiting for you!" Hilarious! So we had to get a picture... 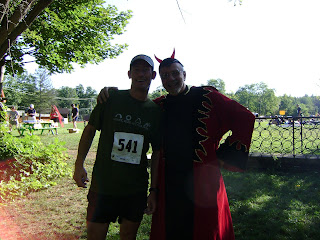 After re-applying the Ivy Block (he was heading into a leg marked "extreme poison ivy"), and changing his shoes and socks, it was time for me to head to Silver Lake... 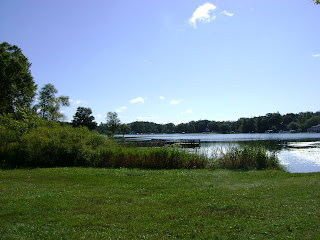 It was gorgeous, but starting to get a little hot. As I sat along the water waiting for Mike to show up, I got a text from the captain of the relay team I was supposed to run the 100k with...their car broke down after the first leg, and they were hitchhiking! Yikes, kinda glad to be sitting this one out :) I met a really nice woman who was standing nearby. Her husband completed something like 100 marathons, good gracious! I told her I'd see her next year, only next time I'll be one of the runners, and she said she was planning to do the same thing. This section would have two stops with the second one being a loop and return to the same aid station before heading off for the final 10k of the race...home stretch!!! So I hung out at the Lake for a while... 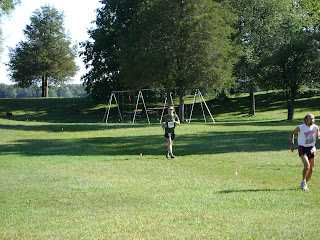 The dude in front of Mike is the guy who's done the 100 marathons. Alrighty, time to head on over to Half Moon Lake Beach for the finish line! It was like a mass exodus, all the crew people getting in their cars. I really didn't need a map, I was able to follow others to all the different crew stops.

Mike was hanging in there, just some pain behind the right knee that was starting to nag a little after 21 miles. After finishing, he said his left leg had started to cramp up really bad and wasn't able to push it too hard in those last 6 miles. Cramped up leg=DNF. So, he took it easy, but still managed to crank out a really good finishing time for a first-time ultra runner!

All told, I think the official finishing time was 6:07:00, or right around that. 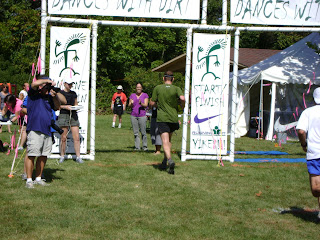 I was so proud of him :) What a trooper! We got Trashed after the race... 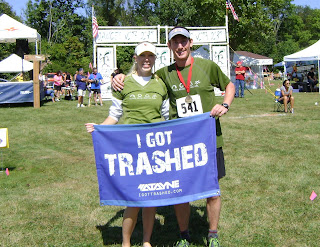 And after a full pizza, a dip in the Half Moon Lake to 'ice' his legs, and listening to three old guys talk about post-run sex cramps (I'm not even kidding...I almost lost my breakfast listening to that conversation), I trashed Mike... 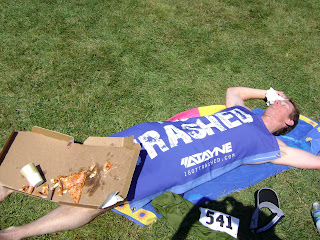 Wow, what a morning, and it wasn't even noon yet! Since it was so early still, and the car was all packed up, we decided to hit the road and head home to Chicago. Not before first stopping in Kalamazoo to grab a bite to eat. Okay, now I realize Kazoo is no foodie mecca, but c'mon there's gotta be more than fast food here! We wound up in what we think was the 'downtown' area, and when we couldn't find a single place to eat we pulled up to a guy standing at a crosswalk to ask if he could recommend somewhere to grab a bite to eat, to which he replied, "well, did you see the Burger King right up the road?" We had to quickly roll up the windows so he wouldn't hear us dying laughing. Seriously, Burger King? So we parked and decided to walk around and find something. We stopped a young couple walking past us and asked them if they knew of anywhere good to eat, and all they could offer us was, "there's a Subway up the block I think."

In the end, we found a cafe/Italian restaurant that only served black coffee, and didn't have any bread. Our waiter was a saint for putting up with our antics...clearly we were both deliriously tired and slap-happy as all hell!

Awesome trip! Incredibly motivating, inspiring and exciting. The people were amazing. The race was so well organized and ran really smoothly, especially considering the number of people and amount of space it required. We had a great time, and I can't wait to go back next year...this time I'll be running!

Wow - excellent entry Paige. A week later my legs are still feelilng heavy, but I'm slowly getting back into the groove of running. Now that I'm in Arlington, VA I get to run rolling hills regularly and have easy access to trails - which is freakin' awesome AND taxing.

ALSO, Paige completed her first half marathon (in the rain) this weekend. Great job! So proud of you. Can't wait to read the blog entry AND CAN'T WAIT TO SEE YOU THIS WEEKEND!