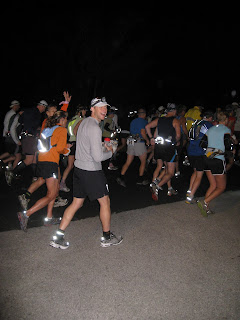 Geof, heading into the early dawn for another 50 mile adventure in the woods
Those who can't, crew :)  Since I'm still working on recovery and earning back a decent base in the wake of Rio Del Lago 100 last month, I sadly opted to sit out this year's Glacial Trail run.  I was hoping to make this one a bit of a ritual since it's such a fan-flippin-tastic race, run by the fan-flippin-tastic Robert Wehner.  It's a gorgeous course with a heaping helping of technical and challenging terrain.  It starts up in Greenbush, WI and follows the Ice Age Trail south to New Fane and then turns around and brings you back to where you started.  The 50k race does a modified version of the 50M course.  I ran the 50k last year and loved every ounce of it.  As the 50M and 50k runners took off at 6am and 7am, respectively, I observed with a hint of trail envy :)
Geof took on the 50M course again this year and while the day started out typically enough, with Geof moving well, smiling, and optimistic for a solid finish, it turned out to be a very different experience in the end.  I took on the roll of crew and after taking a long-cut (the opposite of a short-cut?  Honestly, I wasn't lost...too much :)) down the winding and breath-taking Kettle Moraine Scenic Drive, I hunkered down at Butler Lake with Bill and Sarah as we awaited our respective other halves to arrive at the 13.5 mile aid station.  Geof arrived, game face on, and was out.  Ben came in a little before Geof and it was clear he was going to smoke the course and grab the PR he'd been looking for (he wound up 3rd overall, in 8:11...holy eff!).  Leslie and Deanna showed up a bit after Geof, and it appeared they would spend most of the day together.  Leslie was hoping to shake the demons of an early season DNF at the Kettle Moraine 100, and shake them she did!  In fact, I would call it a knock-down drag-out pummeling of that monkey! :)  Yay, Les! 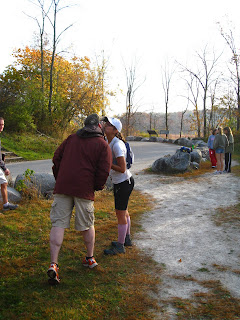 The Newlyweds, Bill and Leslie, at Butler Lake I (mile 13.5)
While I would have loved to have been racing, I can't say I was totally bummed to be sitting this one out, on this day.  It turned out to be an absolutely marvelous day (for crewing)!  The sun came up and warmed up the trail to a lovely 80+ degrees (perfect for crewing, not so much for running) and I soaked up more than my fair share of warm autumnal rays of sunshine.

But, have no fear, I did manage to squeeze in my own little run while I waited for Geof to return to Mauthe Lake AS from the turn-around point (~mile 30.5).  I put my iPhone into a plastic baggy to save it from my sweat, tightened the laces on my Vasque Transistors and headed north on the trail so that I could greet runners heading out.  (Note: this was my first f'real run in my Transistors and while I was nervous to give them a go on such a technical trail for the first time, I ended up really enjoying these puppies!  Of course, they will not be replacing my Sporty Cats anytime soon!)  It was a measly 4 miles I enjoyed on that thar' trail, but boy was it fun.  I saw Leslie and Deanna on their way out, soaked in the superior beauty of central Wisconsin in the fall, sang along to my tunes, darted my eyes around the trail to watch for biting rocks and roots and then caught glimpses of the front runners heading back north on my way back to Mauthe Lake.  Just what I needed, some lovely miles on a lovely trail and a really solid sweat :) 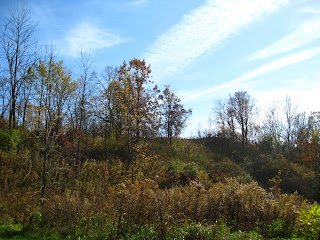 Sure is pretty up there!
After my run, I lounged in the sun and chatted it up with Christine Crawford (super-speedster Wisconsin chick, and super sweet to boot).  After what seemed like an inordinate amount of time (and after I contemplated heading out on the trail to look for him), Geof arrived at Mauthe Lake II even worse for the wear and it was clear he wasn't really enjoying the day as he had intended to.  A mix of the heat and some issues with nutrition and hydration was costing him a fast day.  But, true to his ways, he refused to stop and kept on trucking despite his discomfort.  It was a little weird to see him the way he was (and I knew all too well what he was feeling!), but I reminded myself it was just a part of the fun and he would surely shake it.
He didn't shake it.  In fact, I think it got worse for him.  At Butler Lake II he pounded a bottle of ice water, and then another, but he wasn't taking in calories from what I saw.  It seemed to have gotten even hotter out, so Bill suggested I intersect the trail and get him more water before the next aid station (a good 7ish miles away).  After leaving Butler Lake, I followed the map towards the next stop, but veered off-route and parked along Highway U, where the trail crossed the road.  I was the only person there at first, and I had a front row seat to catch Geof as he approached.  You're not supposed to administer aid anywhere but an official aid station, but it was just a little too hot for my liking so I figured it wouldn't hurt anyone, especially since he was far enough back in the pack.  Well, before too long, everyone and their mother showed up at the same intersection and stood at the trail head waiting to catch a glimpse of their runners.  Great.  So much for that.  Geof arrived awhile later and I didn't offer anything up since we were surrounded, but I would have gladly helped if he had asked for water.  He was privy to my plan, but didn't ask for anything so I figured he was okay. 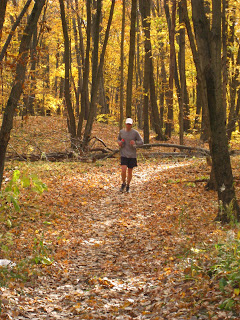 Geof arriving at the Highway U intersection
﻿The next crew stop was the Hwy. 67 AS, leaving the runner with ~7 miles to go.  I hung with Bill, and Leslie's dad there, and caught up with Dominic G. a bit (he was volunteering).  There was a runner laying down underneath one of the aid tables, in the shade.  He sat up and was talking to Dom about what to do.  Clearly, he wasn't feeling all that great.  He asked if the station had any hard candy, and I immediately offered up some Lifesavers I had.  The look on his face was perfect and made me smile.  He got up and went on his way.  Geof arrived, and after slamming some Gatorade he moved out.  That was my cue to move it to the finish line.
The finish area was still shakin' with 50k runners and 50 milers.  I could still smell the chili warming inside the Community Center, and, what's that?  Homemade chocolate chip cookies?  Yes, please!  I grabbed a chair from the truck, threw on my puffy jacket (it got chilly once the sun fell below the tree tops) and popped a squat on the front lawn near the finish line.  One by one, CHUGs rolled in.  Kathy Rytman finished with an age group award, wondering aloud, "why was that so HARD?!"  Deanna crossed the line and immediately declared, "that was f**kin' hard!"  Robert, the RD, asked if he could quote her on that :-)  Soon Leslie rounded the final corner, with Bill in tow, and crossed the line.  See, I knew you could do it, Les :)  And very soon after, Geof appeared up the road, finally closing it out.  Moral of the story? the GT50M ain't no joke.
Whew, what a day!  While he wasn't thrilled with the day (especially since he eyed six snakes on the trail!!), Geof was thrilled to be done.  We headed inside to fill up on chili and cookies and catch up with Leslie and Deanna.  After Bill and Leslie's 'lost' car keys scare, Geof and I hit the road.  It was a looooooong day, and a loooooong ride back home.  But, I'd be lying if I said I didn't fully enjoy myself throughout the day :)  And my little jaunt on the trail totally kicked butt!
I love this sport.
Check out Geof's account of his race HERE.
Crash, out.
Posted by Paige at 1:26 PM

Such an energetic crew..Indeed you have very lovely trail. The photo is enticing..