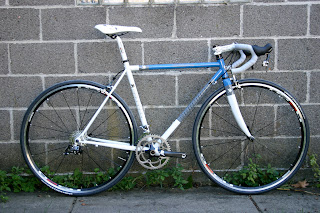 I am pleased to introduce you all to the newest addition to the Serious Case of the Runs home...the lovely Stiletto :)  Check out some more pics HERE.

Remember THIS?  Well, I somehow ended up winning (I still can't believe I won something this kickass) and just last night I received the final product...wow!  Chris Dornbach of Dornbox Bikes is the man behind the machine and after a few phone calls to discuss what I was looking for in a bike, swapping measurements, and lots o' e-mail, he set about creating the most beautiful work of two-wheeled genius that I've ever seen.  Seriously, it's pretty amazing :)

Since Stiletto arrived in a couple pieces, I just oooo'd and ahhhh'd at the box until Geof got home from work, so it was slightly delayed gratification.  But if ultrarunners have one trait in common, I think it's the ability to handle this sort of delay.  Instead, I cooked some chicken with cilantro and lime for tacos :) (The chicken turned out pretty good, btw!)

Geof set about getting Stiletto put together and after putting her up on the trainer to test out the chain and shifting gears, and one final adjustment to the derailleur, she was all set!  It was easy to watch him work, but I think it's a tad more complicated to do than it appeared :)  Thanks, Geof!

Hopefully we get a chance to test her out tonight after work, woohoo!  It was dark by the time all was said and done last night and I'm kind of a whussy about things like riding in the dark, so that didn't happen.  Again, a little delayed gratification.

Anywho, I'm pretty excited about Stiletto and look forward to many long rides and happy times with her!  A huge, delicious THANK YOU to Atayne and Dornbox Bikes for making this possible for me.  And, if you're ever in the market for a completely customized, handcrafted performance bike, I highly, highly recommend working with Dornbox Bikes to make that happen.  The service, the quality, the craftsmenship, it's all top notch.

Back to running, I promise!!

is another blog in your future - serious case of the rides?

Drooling big time - as run/bikers, we can appreciate that work of art. Nice!!!

You're going to love that bike, Paige! Cross training, girl....