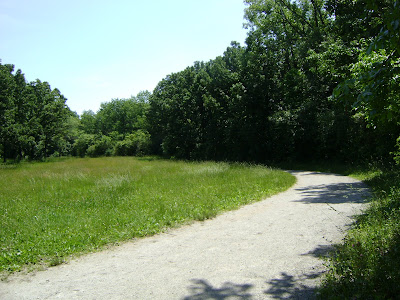 Yesterday morning, I met up with Sidekick Gary out at Palos Hills to do some loops of the yellow trail via 40 Acre Woods. It ended up being a totally kickass day with perfect running weather (well, it was a tad warm, but great for training purposes!). We planned for about 20 miles for the day. I also planned to try out a different nutrition plan..."real" food, and no Clif anything. I also wanted to try out Ensure to see how it would sit in my stomach.

After the first 8.9 mile loop, we stopped at our cars and refilled bottles. I was drinking my personal fave, Nuun, and I decided after carrying "as much shit as possible" on my first loop, I wanted to get rid of some of the weight. Now I know I can carry a lot :) I dropped the camera, one water bottle, and some other stuff in my vest. We both tried a bottle of Ensure. Tasty and delicious, no doubt, now it was going to be the "loop of truth"...would I encounter any stomach problems? I ate half of a Lara Bar (peanut butter cookie), my first time even tasting one of these and it was delicious!! I also packed a small baggy of sweetened dried mango slices. And then we were off for loop numero dos.

Gary wasn't really feeling the run, and much of our second loop was kinda quiet. He got worried about his water, so we stopped at a water pump along the trail and filled up. At the section where you get out into the open and can see the old toboggan slides, I pulled out my mango slices and we indulged mid-stride. Whoa, those are some tasty little suckers! I'm thinking I'll be bringing these along for all my long runs now. Though they are dried mangos, they still had that same quenching sweetness that fresh mangos have, plus a little added insta-energy in the form of pure sugar. Awesome! So far so good on the Ensure stomach, too. The only thing we noted about the Ensure was that it made us burpy...now how does a milk-shake like substance give you the burps? We found it pretty entertaining :) Gary needed to use the facilities towards the end of our 2nd loop, so I took pictures while he did his thang. 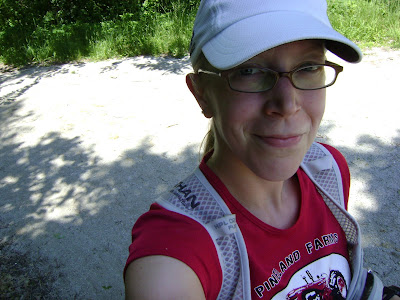 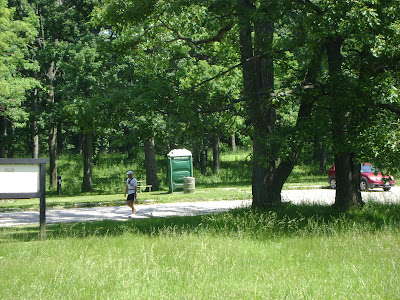 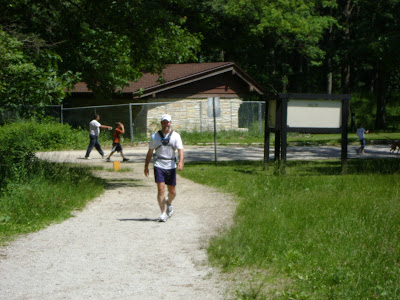 I think he felt better ;) Clearly, there wasn't much to take pictures of at this point!

Gary had to cut out early for a work appointment and then a fancy shmancy date, and since we had somehow managed to cut our second loop short (how does one manage to do that on a loop course without any shortcuts?!), I decided I was going to stay and get in a few more for the full 20 miles. I had the other half of my Lara Bar, added another Nuun tab to my water, stashed some more mango slices for the trail, and grabbed my iPod as Gary headed out. I took the trail in the opposite direction (which usually gets me lost ;)) and only planned to do 2 miles out and back, but then at mile four I decided since I was halfway around the loop, and having such a blast, that I would just finish it out for a nice even 24 miles. At the two bigger creek crossings, I opted to walk on water rather than use the friendly pedestrian bridges. That water felt GREAT on my knees and feet! I kneeled in the water on the other side for a few minutes to let my knees get a little frozen. My right foot was forming what felt like a groovy blister (and it was) which was annoying as hell since I was wearing my "anti-blister" Drymax trail socks...story of my life. There were lots of people out on the trails, horse riders, cyclists, other runners. It was nice to see other life out there, it's been pretty quiet the last few times out at Palos. I felt good mentally and was smiling the entire time, singing along to my iPod (much to the entertainment of more than a few other trail peeps) as I managed to rip along the trail (where did this energy come from?! Must have been the Ensure and mangoes...).
Back at the trailhead parking lot, I hobbled off to my truck to stretch, eat and observe the customs of some nearby parkgoers...three very large middle-aged dudes (one without his shirt on, mind you) listening to Journey blasting from their boombox, while chucking their beer cans at a garbage can 10 yards away. They kept missing the garbage can, and after a dozen or so cans littered the picnic area they were in, I cast them a dirty look which one of them caught and immediately jumped up to pick up their cans. Ha, thank you!
A lovely run, and I'm super psyched about the new nutrition 'plan'. It's nice to know I can run just as happy on real food, as opposed to only Clif Shot Bloks (which I still love). I had more energy at the end of the run than I usually do which = most excellent. I definitely plan to keep the Ensure, Lara Bars and mangoes around. Next, I want to try Perpetuem. Gary was spouting the virtues of the stuff so now I want to give it a shot.
Now, I'm icing my knees as I sit at my desk and type this. They're a little stiff and achy from yesterday's run, but that comes with the territory :) Off today, run tomorrow! 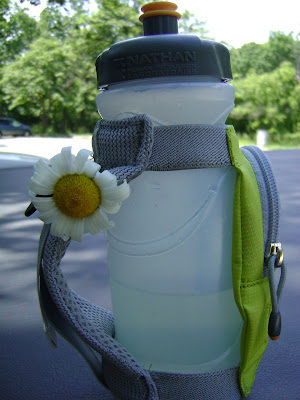 "The richness I achieve comes from Nature, the source of my inspiration." ~ Claude Monet
Posted by Paige at 9:36 AM

So Shot Bloks are not "real food" but Luna bars and Ensure are "real food." Your definition of "real food" confuses me :p

Yes :) For me, real food = nothing gummy or made of "gel". Baby steps for this amateur!

Nice job on your run! I haven't had Ensure since I was 15 yrs old with tonsillitis and had to get nutrition in. Every time I see it I think of that time...was in the hospital for 4 days and fed penicillin via IV when I found I was actually allergic to it. Holy Hives!

Anyhow, it was a lovely day yesterday, for sure! Thanks for posting about your fun time on the trails! BTW, love the flower on the water bottle. :-)

Yikes, that's traumatic!! Well, maybe one day you'll give it another shot...it's not so bad :)

The trail was overflowing with daisies, so I picked one and ran my entire last loop with it on my bottle. Made me smile :)

I think I recall liking the vanilla flavor...considering how often I see it at these ultra events I hope to associate a new (and more positive) memory to it at some point! ;-)

Nature is awesome :-), when I ran at the tri-county trail last week I was enjoying all the robins flying around. There were so many, no wonder there was a big group of bird watchers on the trail. I think I'll go there tonight for an easy one!

Nice run, Paige! Way to run on in for 24. Food is good. You'll be ready for grilled cheeses and turkey sandwiches in no time.

Since Ensure went over good, you need to try a can of Campbell's Double Noodle Chicken Soup. Eat it right out of the can. The liquid is super salty, the slimy noodles slide right down and best yet, the little globs of chicken fat floating on top stick to your teeth and you get to taste it for five miles. Seriously, at most aid stations with drop bags, I do an Ensure and a can of DN Chicken Noodle soup. 600 calories and a boat load of sodium. Puts a smile on my face and I'm ready for the next section of trail.

Ensure rocks. Recently started using it and with good results. I think it'll be a staple to my ultra diet from here on out.