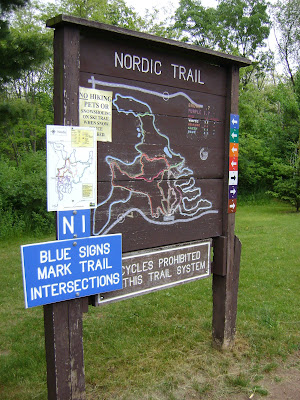 When you wear multiple hats in one 14-hour sitting you can get a pretty gnarly case of helmet head. Good thing it was so cold that I kept mine on all day :)
This time around, I decided to turn the tables about 180 degrees and give things a shot in the volunteer department of ultrarunning. Truth be told, my initial motivation was to earn those required eight hours of volunteer work in order to be allowed to run in the Vermont 100k in July. But then, I started to have something I wasn't really expecting from the day: fun! And, eight hours turned into 10, then 12, finally tapping out at 14. This was my first time volunteering at an ultra event and I didn't really know what to expect, other than being on my feet all day while feeling a boatload of regret for having to miss my best friend's wedding shower to hang with a bunch of (totally awesome) sweaty ultrarunners. I was also planning on pacing Lynnor Matheney the final 38 miles.
Volunteer, pacer, friend, advice-giver, chef, cheering squad, smile spreader, pearl giver, tough love-er...these are the many hats of an ultramarathon volunteer.
I arrived at the Nordic AS (also the start/finish for both the 100-miler and the 100k) around 2:30 p.m. on Saturday where I immediately introduced myself to Timo (RD) and he put me right to work with another volunteer (Beth Simpson-Hall) organizing the awards for all the different age group finishers. Once that was done, Jason Dorgan (RD) appeared with the truck and all the supplies to stock the aid station tent. Beth and I immediately got to work getting the food laid out, water jugs filled, Heed mixed, crock pots warmed, soups boiling, making sandwiches and cutting into quarters, and everything organized in a very OCD manner...um, hello, it's in our nature, as ultrarunners, to be OCD :) 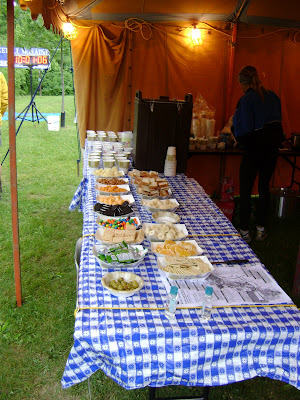 The lovely spread at the Nordic AS 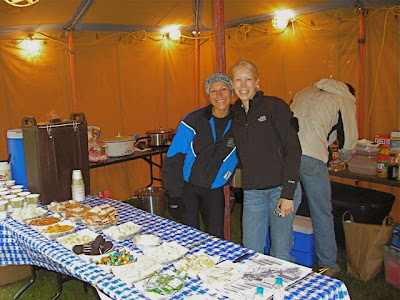 Beth and I, very proud of our neat handy work :) That's Jason in the background 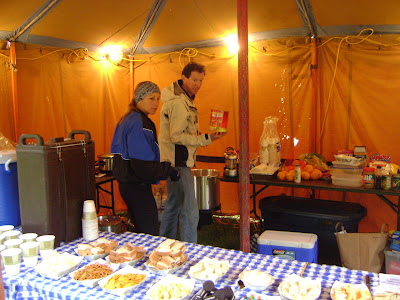 Jason was the 'chili man'...the man makes a mean pot of canned chili! It's all in the wrist

Once everything was set up, we just kind of hung around until runners started coming in. We were expecting the first 100k runners to finish pretty soon. Eventually, Wynn Davis came bounding out of the woods and across the finish line. First overall finisher in the 100k, and he annihilated the course record by over 30 minutes. He looked just dandy, like he hadn't just run 62 miles. The most shocking thing to me? He's so young! I thought Wynn was older for some reason. Now that we had people coming in, Timo wanted to be at the finish line to announce "hundred K runner, comin' in!" or "hundred mile runner, headin' out!" each time someone approached or headed out. 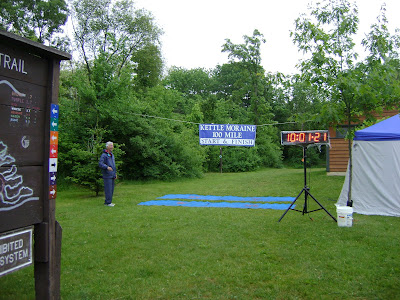 Eventually, fellow ultralister Gene Taylor shows back up at the aid station and he hangs out for awhile, waiting for his time to jump into the 100 mile relay. Here's Gene... 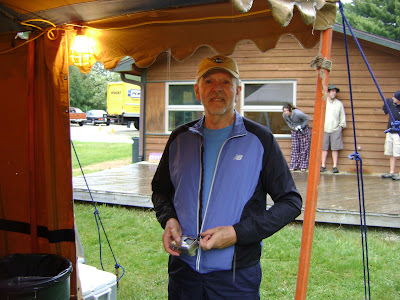 It rained for a bit, and then I started to get cold, so I ran to my truck to grab some gloves and my neck gaiter, making it back in time to catch the first woman finisher for the 100k, Ann Heaslett... 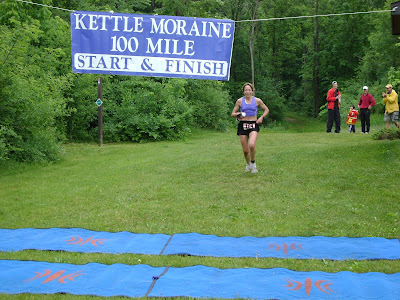 After her finish, Ann came back to the Nordic AS (which she is usually in charge of) to help out for awhile. What a nice gal! She's kind of a big deal, too, and sharing the AS tent with Ann and Beth for much of the day made me feel quite small, but in a good way. It's very humbling being in the presence of amazing talent, and incredibly inspiring! We were all talking about losing toenails, and then Ann showed me her toe that she had the nail removed from, yikes!! Surprisingly, it looks normal (plus, she said you can put nail polish on it to make it look even more normal). Speaking of amazing talent, somewhere around this point, Christine Crawford comes up to the tent (in her Atayne shirt!!) and announces she has dropped from the race, due to a hip flexor injury. It was sad to see her there saying that, she looked crushed, and she is such a speedster that she would have just torn up that course. Hopefully she is doing better! Then Kevin Setnes strolls up to the table...not realizing who it was, Gene let me in on it. Wowza, no way!

I was getting so cold standing around and Beth and I were working on getting Gene's coffee maker working. I put in an emergency coffee call to Gary, who was crewing/pacing for fellow CHUGs Geof and Vishal and begged him to pick up some coffee on his way back to Nordic. I think he had a halo floating above his head when he arrived, steaming hot coffee in hand! Thanks, G! There was also a Cinnabon roll and cookies back at his car. Music to my ears. I defrosted my feet and warmed my tush while we chowed down, then I went back to the AS so that Beth could hit the road. Great timing, cuz then Geof and Vishal arrived at the 100k mark! 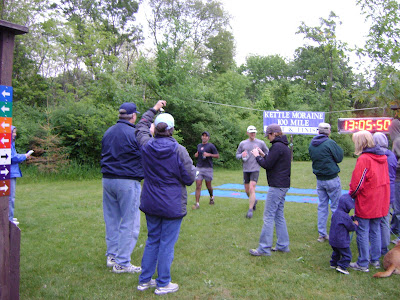 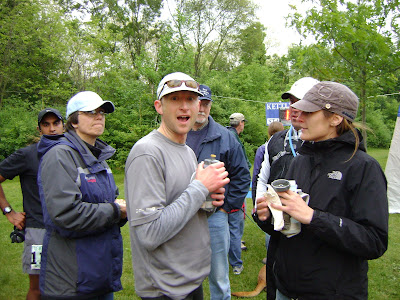 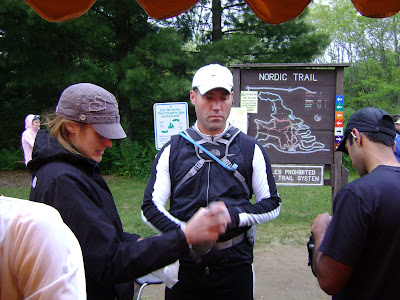 Gary has his race face on already...he's ready to do some pacin'! 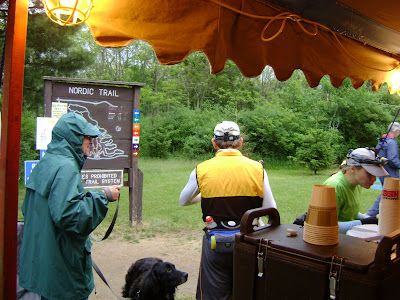 Norm (in the green) and Kat Yarger (in green) 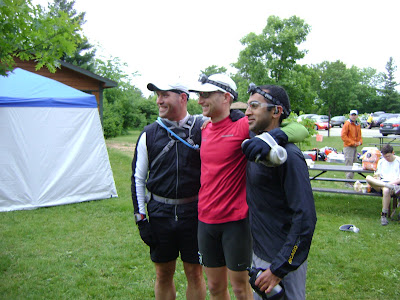 The Three Stooges (Gary, Geof and Vishal), ready to get back out there and finish up the final 38 miles 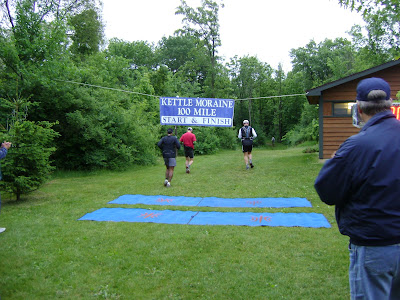 Night seemed to creep up on us, and around 8:00 I went and changed into my running clothes, anticipating Lynnor's arrival. I wasn't sure what her pace was, or when she planned on getting into Nordic, I just wanted to be ready. Boy was it cold in my running tights!

Andrea, Timo's daughter, arrived at some point after this and was helping me at the AS, and she ended up staying for a number of hours. Andrea is such a delight and so incredibly nice! I had a great time hanging out with her. 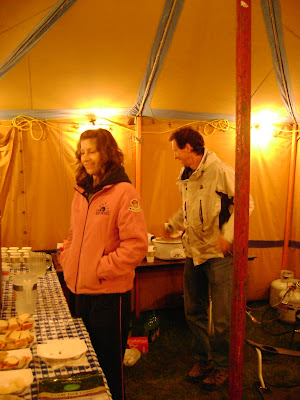 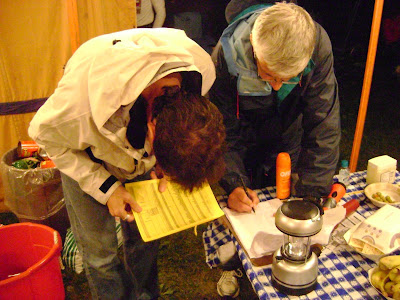 I hadn't realized Nordic was one of the cutoff points, and in order for Lynnor to continue she would have to make it back to Nordic by midnight (18 hours). Before I knew it, it was midnight and she hadn't come through, so I went and changed back into my warm clothes and decided to stick around so I could at least meet Lynnor in person (and give her a gift I had made). I think it was around 12:20ish or so when Lynnor and Sherri (not sure if I'm spelling that right!) made it back. They were tired, but what a hoot the pair were! They immediately popped a squat while Timo gave them their finisher awards (they were credited with a 100k finish, and got a cute little kettle). I haven't laughed so much, especially on so little sleep, in awhile; those gals were just what I needed! I gave Lynnor her gift... 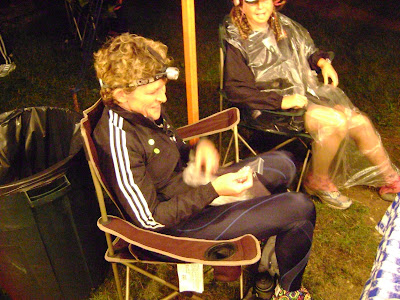 Her very own handmade pearl necklace! She got a kick out of that 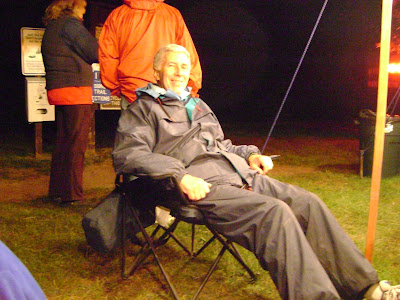 One of the rare times Timo actually sat down, and one of the rare moments he wasn't trying to marry me off :) I think Timo likes to be a matchmaker! 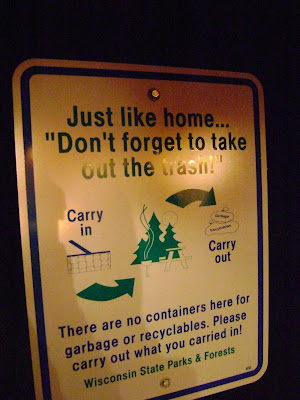 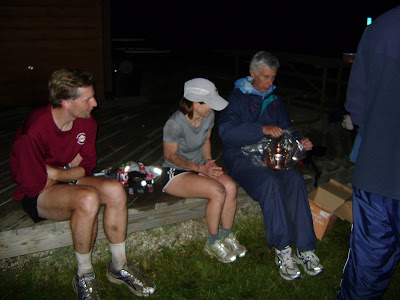 The first female finisher of the 100M makes it in, woohoo!

I had so much fun, and before I knew it the sun was beginning to peak up over the horizon. Wow, that went fast! Once I saw the sky getting brighter, I began to feel the first bits of exhaustion. Sweet, I can stay awake for 20 hours...now I just need some heat training and I'll be set for Vermont :) I met so many awesome people, and the runners were more than grateful and totally inspiring. It's really cool to watch people as they cross the finish line, humbling to be surrounded by some serious talent, heartbreaking to see the DNFs pile up, exhilarating to hear that it was another runner's first time finishing the distance. It was great to see so many familiar faces: fellow CHUGs Tony, Greg, Jonathan, Vishal, Gary, Geof, Torey, Brian and Kelly, fellow McNaughton-er Matthew Condron (super nice dude, by the way, and he kicked some butt in the 100k!), I finally got to meet the illustrious ultralister Rich Limacher (he of the "Real Men of Genius" posts) and saw a familiar face from McNaughton, Varsha Kulkarni.

What an inspiring weekend! I didn't realize how rewarding volunteering would be at such an event, I thought I would only be able to think about being out there running, when in fact I hardly thought about it at all; I really enjoyed myself, and I look forward to my next volunteering stint :) I was a little bummed to not get a long run in, but then again I think my legs needed the rest anyhow, and Jason needed the help at the AS, so it worked out great in the end. After a nice little two hour nap curled up in the front seat of my truck, I went back out to say my thank yous to Timo and Jason for having me out there, and to watch a couple more finishers come through. One woman thought her husband might divorce her for leaving him in the dust...she was hilarious!

Great job to all the runners, and thank you for making my day so freakin' enjoyable! Gotta love ultrarunners!

And I almost forgot! I finally heard back from Mike later on Saturday evening...he finished Pittsfield Peaks 53M, which means I'll be donning the infamous chili pepper shorts come Vermont. I'll make those shorts look good! I'm just glad Mike got another finish pre-VT100, and at a ridiculously difficult race no less!

As usual Crash, great report! Thank you for being out there. It was nice seeing you at the finish.

Incidently, I volunteered, also for the first time, at KM at the Nordic AS. Great group of people who (wo)man that station (and all stations for that matter).

Thanks, B! I'm looking forward to my next volunteering stint, especially to help Timo and Jason again; they totally rocked.

Great report & pictures. That looked like a great finishing food table that you folks had going! My hat is off to the chefs...

It is cool to read a report from the perspective of a volunteer. I bet that has to be an endurance event in itself!

You always crack me up :-) I too was surprised to discover how fun ultra volunteering can be.

Paige! Good on ya for volunteering and staying out there all night in the cold. Gotta love the volunteers!