Sometimes you need a weekend spent with some of your favorite peeps to remember that it's the little things that keep you CHUGgin' along :) This past weekend was so great that I decided it warranted a blog about it...

I ventured out on my first ever experience of a Chicago Critical Mass with Geof on Friday, June 26th. We grabbed bikes at his place then biked over to Daley Plaza just in time to catch up with the back of the pack as they pulled out of the Plaza. Granted, the Mass was a few blocks long and likely a couple thousand strong. We wound around the southwest loop area for a bit, but the Mass never thinned out really so it was slow going in back for us. But once we turned north on some major street I can't recall the name of the pack thinned finally. After an hour or so we left the pack and headed back into the city. Fun stuff!! I'm not much of a cyclist (read: not at all these days) but I sure enjoyed myself and look forward to doing it again. 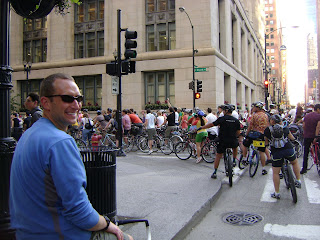 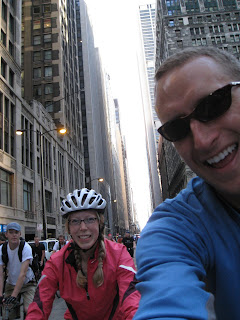 Geof showing off that he can take a picture and steer his bike with one hand, simultaneously. Me? I'm just glad I wasn't chewing gum at the same time, that could have been fatal ;)
Saturday was the second running of the Chicago Trash Runners. Seven of us hearty TRs descended upon the southside 'hood of Hyde Park and landed in Washington Park for round two. Boy did we have our work cut out for us!! Fellow CHUGs Deanna, Geof, Greg and Torey made it out, as well as my sidekick, Jessica, her puppy Sadie, and Beth, a reporter from NewCity magazine. After just an hour in the park, we had collected 8 bags of garbage bursting at the seams, as well as an undocumented amount of recycling that we put directly into the recycling bins around the park. All in all, a success :) 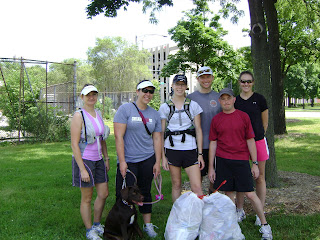 Deanna, Jessica (w/ Sadie), Me, Geof, Greg, Torey and the last of the trash bags

Then, as if the weekend weren't already action packed, my best friend, Erica, from the days of short legs and pigtails was having her bachelorette party. The lady is gettin' hitched in less than a week, wowza!! When did we age past 15? My how time flies :) 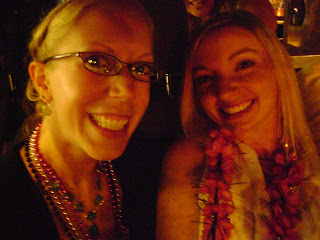 Erica and I in the cab after dinner

Goodness it's rough having a life ;) Just when you think I might have had time to sleep this weekend, think again. Geof and I drove out to Palos Hills to meet up with some CHUGs for another long trail run, this time we hit up Pulaski Woods (Mtn. Bike Staging Area #2) so we could get a dose of some good singletrack. And boy did we find some! That is exactly what I needed pre-VT to remind me why I love trail running :) We cranked out a little more than 16 miles for the day, just short of my 20-mile pie-in-the-sky goal for the day, but given the time we got on our feet, the weather, the trail and, above all, the company, I left very happy. 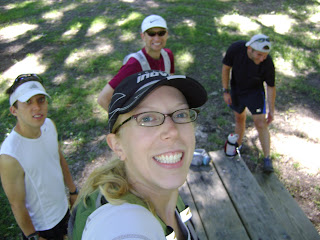 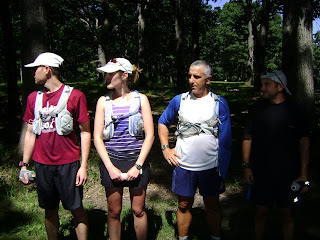 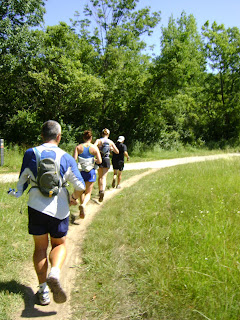 What's the next best thing, after a good long trail run? Stuffing your face! Geof mentioned early on that he felt like a burrito...what a funny thing to feel like, is that constricting? ;)...then Jim chimed in in agreement, then it just went from there. So we found ourselves lining up along the chilly tin wall of Chipotle on 154th (I think) and 45, everyones mouths watering looking at the food being prepared for us. Luckily we were able to snag some outdoor tables and enjoy the warmth and shade while we ate like trail pigs. 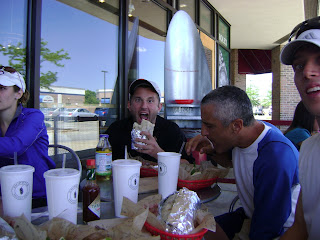 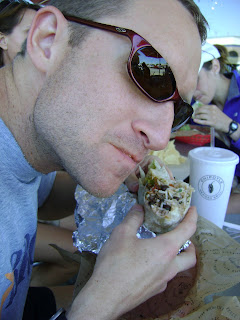 Geof was very content with his burrito...don't bother a man with a hot burrito!